How Important Being Invited is to You, Based on Your Personality Type 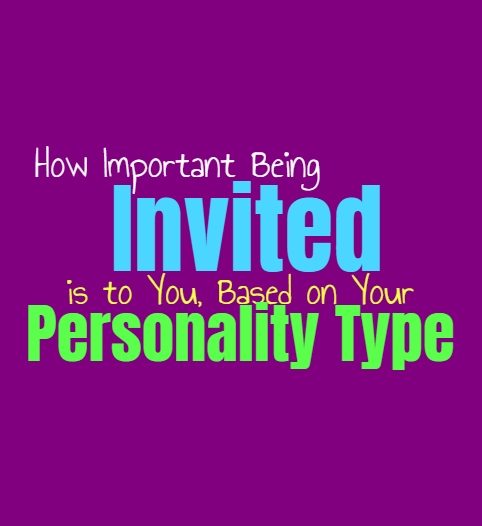 How Important Being Invited is to You, Based on Your Personality Type

For some people it is just important to be invited to things and to be included, rather than to actually attend. They just want to know what they matter and that people want to invite them to things. Here is how important being invited is to you, based on your personality type.

INFJs do enjoy being invited to things even though they don’t always want to attend. They are introverts who enjoy having time to themselves, but they want to feel included. They might not always have the emotionally energy to go out, they just want to know that they are wanted. For the INFJ it is important to feel like their loved ones want them there, even if they just are thinking of them in spirit. This isn’t because they don’t want to spend time with them, it’s just that sometimes they are feeling drained and really need to recharge.

ENFJs do want to be included and invited to things, usually they will make time for their friends and loved ones. ENFJs do become caught up in practical things and so sometimes they might not be capable of attending. They simply want to know that people want to include them and that they matter enough to be invited. For the ENFJ it is about feeling included and loved, and special enough to actually be invited to things even if people know they cannot always attend.

INFP
INFPs do want to be invited to things, but this doesn’t mean they always want to attend. They need plenty of time alone and don’t want to feel like they are obligated to attend. For the INFP it is more about knowing that people care enough to include them and enjoy being in their presence. They often care more about being included by the people they are close to, and might prefer being invited for more personal get togethers.

ENFPs don’t want to feel left out and prefer to be included in new things. They do want to be invited when there is a get together and really don’t like feeling pushed out of the fun. ENFPs might not always want to attend if they are caught up in something else, but sometimes just the idea of being invited is really special to them. They want to feel like they are important to those they care for, and so they don’t like the feeling of not being invited.

INTJs don’t usually care that much about being invited to things they don’t want to attend. INTJs do care about their loved ones inviting them places, but they would often prefer it to be a more personal setting. They don’t really care for crowds and big get togethers, and become drained with too much social interaction. They would rather the events or gatherings be more thought out and intentioned and in this case they enjoy being invited and included.

ENTJs do want to be invited to things, especially by the people they care for. They want to feel included, since a sense of loyalty is deeply important to them. If they are left out of things it makes them feel like they aren’t valued to those people. For the INTJ being someone who is invited to things is definitely important, especially if these events are something they enjoy participating in.

INTPs do care about being invited, but they aren’t necessarily good at attending. They enjoy having time to themselves and don’t always have the social energy to attend certain get togethers. While they might not want to attend, they do want to be invited. INTPs care about being included and want their friends and loved ones to show that they want them there but they don’t want to feel guilty about not going.

ENTPs do want to be invited, especially when it comes to their loved ones. They want to feel included and often enjoy the chance to go out and do something new. ENTPs don’t like stagnancy or being left with their thoughts for too long without interaction. When their loved ones include them and invite them it makes them feel like they are special and important.

ISTJs do want to be invited by their loved ones, since they don’t like feeling left out. While ISTJs do often need time to prepare for these things, they care about being included. They might not always be able to attend though, since they are often busy people and also require plenty of time alone. While they need this time to themselves, they still want to feel like they are important enough to be invited.

ISFJs do want to be invited to things and want to feel like they are important enough to be included. ISFJs want to be special enough to their loved ones to be included in things, and don’t want to feel pushed out. If someone forgets to invite them, it often feels like a bit of a betrayal. For the ISFJ it is more about being invited than actually attending, since sometimes they do want to have time to themselves.

ISTPs do care about being invited especially if the events are fun and exciting. They want to experience new things and so being included can give them a chance to do this. ISTPs don’t often become upset if they aren’t invited to every little thing, since they don’t think that people are obligated to include them. ISTPs also enjoy spending time with different people and feeling free to explore different experiences.

ESTPs do want to be invited to things, especially with their loved ones. They care about being included and want to feel like they are special enough. ESTPs don’t like feeling as if their friends have pushed them out and can actually be a bit jealous sometimes. For the ESTP it is about being important to the people in their lives, and they also enjoy being able to enjoy new experiences.

ISFPs do want to be included in things and don’t like feeling as if they are being pushed out. They do want to be invited to things even if they don’t always want to attend. ISFPs care about being with those they love, but they also need some times to themselves. They are introverts who can feel drained if they are in social settings for too long. But they do enjoy feeling connected to those around them, and so being invited does matter to them.

ESFPs want to be invited to just about anything, especially with their loved ones. They care about being included and don’t like feeling like they aren’t important enough to get an invite. ESFPs also enjoy experiencing new things and so the chance to take on something new is important to them. They will often bounce around and jump into new experiences, wanting to shake things up sometimes.