Life is Short: An INFJ’s Perspective on Mortality 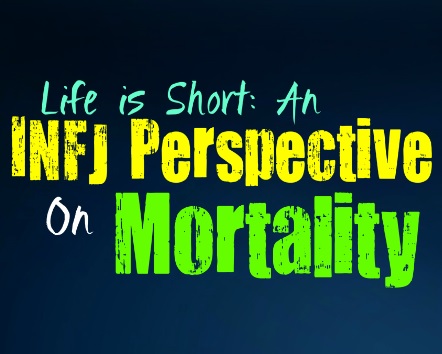 Life is Short: An INFJ’s Perspective on Mortality

Where were you at 8:06 a.m. on Saturday, January 13, 2018? I was at work, serving coffee and pastries to customers in a small, but recognizable, coffee shop. I had just clocked in and started my shift when warning notifications began going off and people started checking their cell phones and mobile devices. Everyone’s phones lit up simultaneously, and the message we all received was truly terrifying.

“BALLISTIC MISSILE THREAT INBOUND TO HAWAII. SEEK IMMEDIATE SHELTER. THIS IS NOT A DRILL,” read the warning. My breath caught in my throat. For nearly forty minutes, the people of Hawaii and the visitors who travelled here were on pins and needles, waiting to see what would happen. Of course, we all know that Hawaii doesn’t really have a viable defense against an attack of that nature, except for our brave men and women in the military, who would hopefully intercept it and take it out.

For a few brief, intense moments, I thought it was all over. I called my coworkers and gave them instructions to stay home until we received word of what to do next. I called my mother, who was beside herself with panic and taking care of my bed-ridden aunt. She had called the police to see if they knew anything about the alert. They informed her that it was a false alarm, which turned out to be accurate.

Thirty-eight minutes after the initial warning went out, all of us received a new, official notification: “There is no missile threat or danger to the State of Hawaii. Repeat. False alarm.” Hundreds of thousands of people had been rudely awoken and crying, panicking, thinking they had only fifteen minutes left to live, and then… nothing. No worries. Just a false alarm.

Most of us felt relief wash over us for an instant. Then came the anger and frustration, and the assignment of blame. City and state officials held press conferences and went into damage control mode immediately afterward. The cause of the false alarm was revealed to be a worker who had inadvertently pressed the wrong button during a shift change, which triggered and sent out the public alert as they were testing the system internally. “Human error” was the refrain from Hawaii Emergency Management Agency officials. The public was incensed even further.

Finally, on Monday, Jan. 15, the media reported that the person responsible for the “mistake” was reassigned. Not suspended. Not terminated. Reassigned. You can imagine how well that has gone over with the people who live in the state.

I have only a single word to describe that morning, and the incident itself: chaotic. I was working with two amazing people that day, and later two more came on board to help us when we were in the thick of it. Luckily, even through all the stress and chaos, we kept our heads down and worked through it, and eventually came out of it intact. I cannot tell you how impressed I was with my coworkers, and how they inspired me to keep going, even though I was exhausted and freaked out.

Which brings me back to my main point. What is it like to be faced with your own imminent mortality? Honestly, it’s pretty terrifying. I know a bunch of you are stoics who would laugh in the face of death, and if that floats your boat, then I’m proud of you, because I found out that I couldn’t do that. I tried very hard to maintain my composure while I was at work, but I still had instances where I started questioning myself. What if this is the end? What about my friends and family? What if I never get to see the people I love again?

What if I never get the chance to tell my loved ones how much they mean to me before I die?

It’s funny how an extreme situation often puts things in perspective, isn’t it?

Indeed, this whole unfortunate and heart-wrenching event was also kind of an eye-opener for me. I thought of my life for a moment, and then I realized that I haven’t really, actually lived. I haven’t approached life openly, or with my authentic self. Everything I’ve done has been in service to something outside of myself. I realize how self-centered this may sound, but I made a vow that day, after my shift was over and the false alarm was long done.

I promised myself that I would live my life to its fullest, and that I would work even harder to be with the people I love, and that I would do more to facilitate my own personal growth while continuing to tend to the needs of my family, coworkers, and friends.

You see, one of my major thoughts that day was that I “haven’t lived.” I have always sublimated my passions and suppressed my emotions to the point that it was unhealthy. I basically threw away my twenties and never experienced the amazing and beautiful things this world has to offer, because I genuinely had no interest in doing so. Knowing what I know now, I would handle things very differently, if only I could go back again.

However, we can’t change the things that have already occurred. We can only move forward, and that is my central point and message to all of you.

Live your life. Be passionate and adventurous. Go on trips to exotic places. Find beauty in nature. Look up from your cell phone and tablet and computer and TV screens (he says while typing this into a computer screen), breathe in the crisp, clean air, feel the sun on your face, witness the incomprehensible beauty of the moon and the stars. Swim in the ocean. Most of all, embrace your loved ones, and spend time with that special person in your life, even if that person is yourself. Be present. Laugh a lot, and share that laughter with others. Be kind and loving and compassionate.

Most importantly, find happiness in your own truth, the truth of who you authentically are. You may have to face down challenges, and you may have to fall apart in order to find all the pieces of your soul and put it back together again, but as painful as it is to do so, you will be stronger in the long run. You will persevere. I know, because I’ve gone through it, and I freely admit that I’m not the strongest person in the world…but I made it. I learned a lot about myself in the process, and I owe a lot of people a great many thanks for helping me rediscover who I am. Especially because I had people who love me close at hand. They saved my life.

This is the secret, I think, to conquering the fear of death and the mystery of our own mortality.