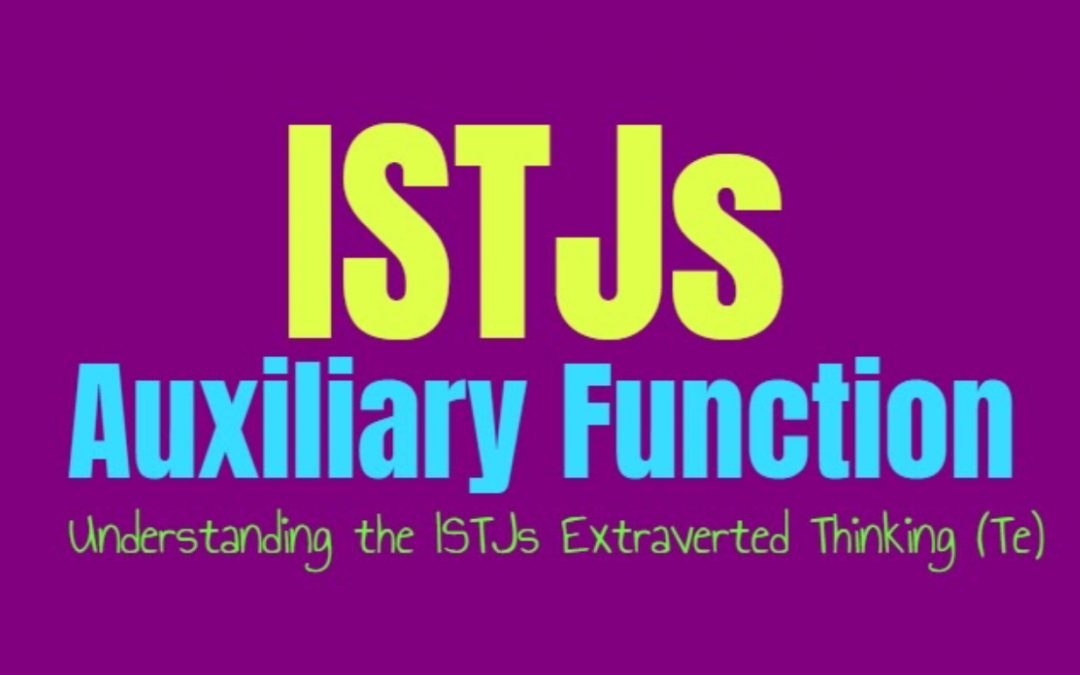 ISTJs are very practical people who care about getting things done efficiently. Their dominant function might be their Si, but their auxiliary function is often the one which stands out the most to others. Since their aux function is the ISTJs first extraverted function, it is often the one which is the most outwardly expressed to the world around them. This function is their Te or extraverted thinking, and it is part of what drives the ISTJs to value efficiency so much. They care about getting things done and are often great at finding ways to solve problems without constantly needing to rely on others to do things for them. While they can certainly work with other people, ISTJs are not afraid of taking on challenges themselves. Their Te plays a strong role in how they handle problems, especially when it comes to the workplace.

For the ISTJ their auxiliary function is actually the one which stands out most, and plays a major role in aiding their Si. This is their main way of interacting with the world and connecting with the information around them. It drives the ISTJ to value efficiency above most things, wanting to always get things done with a sense of accuracy and a strong work ethic. They care about doing things the right way, rather than always searching for shortcuts and easy ways out. They can become rather annoyed with lazy people and actions, wanting to find ways of improving at all times. They value healthy competition in their lives and this is something which often stems from the use of their Te. They can see how they could be doing better, and sometimes competing with others is what helps them to grab hold of that extra push they need in order to improve themselves. They need to find ways to always keep moving forward and really care about taking action rather than just speaking about things. The ISTJ is also very practical about their choices, wanting to ensure that they do not waste time or energy on things which won’t be useful for them or their loved ones.

Their Te is part of what helps the ISTJ make fast decisions, rather than needing to constantly analyze each choice. Their minds have likely already worked through the facts and information, and this helps them figure out the most logical choice to make and path to follow. While ISTJs are introverts who often prefer to spend time on their own. Their Te is something which helps them to take charge if the situation calls for it. They can appear somewhat aggressive and direct when they are focused on getting things done, and are not afraid of giving instructions. This is definitely in large part because of their auxiliary Te, as it helps the ISTJ figure out the best way to delegate and ensure that everyone works together smoothly. The ISTJ values being able to keep moving forward, rather than constantly wasting time and energy analyzing a situation or a problem. They can see a way to getting things done efficiently, and this is the path they want to take. This can be intimidating for people at times, especially since it isn’t always outwardly expressed in ISTJs as much as in ESTJs or ENTJs.