Do You Mask Feelings with Humor, Based on Your Personality Type 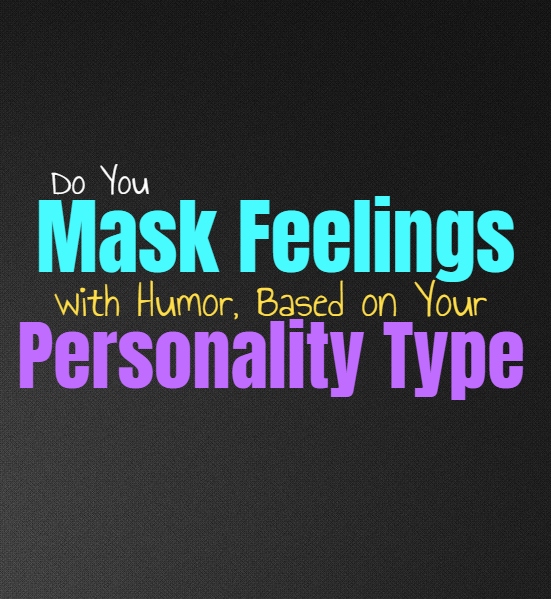 Do You Mask Feelings with Humor, Based on Your Personality Type

Some people find it difficult to fully express themselves, and so sometimes they use ways to deflect or mask their true feelings. Those people who fear vulnerability sometimes use humor as a way to cover up their feelings instead of being open about it. Here is how likely you are to mask your feelings with humor, based on your personality type.

INFJs are likely to mask certain pain with humor and witty retorts, especially if it is something they are attempting to bury. INFJs do sometimes feel ashamed of certain emotions, wanting to appear stronger and more capable of powering through it. Even though they might be struggling inside, they don’t always feel comfortable expressing this outwardly. INFJs do sometimes use humor as a way to express those feelings though, sometimes making these comments seem like a joke when they are being very truthful in hopes that someone will understand.

ENFJs want to be appear strong and somewhat perfect to those around them, struggling to really expose their own weaknesses. When they are upset or hurting over something, it might be hard for them to express this. They don’t want it to seem like they are weak, or like they are failing to overcome these struggles. When the ENFJ wants to deflect, they do sometimes use humor as a way to express those feelings without it being obvious. They also use wit as a means of deflecting, but for them having constant distractions can be an even better method of ignoring those feelings.

INFPs do use humor to deflect sometimes, mostly they use self-deprecating jokes and comments to actually express themselves. This helps the INFP get these thoughts out, without feeling overly vulnerable or judged for them. For the most part INFPs prefer to express themselves to others openly, and so they don’t like burying things or pretending that they are fine. While for them humor can be a good way to ease into expressing a certain thought or feeling, it isn’t necessarily used to mask their pain.

ENFPs use self-deprecating humor and jokes as a means of avoiding being too vulnerable. ENFPs do need to express themselves and their feelings to others, but if they are afraid of doing this openly, sometimes they can let it out in a joking manner. They might have a hard times really expressing their feelings if they have been hurt by doing this, and so this type of ENFP can be more hesitant to express themselves. Most of the time though, ENFPs prefer to be open about how they feel and so they might have a hard time really burying these emotions.

INTJs often use sarcasm and a sense of drive in order to deflect from their emotions or negative feelings. Most of the time INTJs bury their feelings and try to focus more on logic and facts, rather than things which cannot be proven or fully understood. For the INTJ humor can certainly be a way of deflecting, but often they use a more dry and sarcastic humor as a means of expressing things or even of distracting away from them. They sometimes struggle to really accept these inner emotions enough to really know if they are deflecting or not.

ENTJs don’t necessarily use humor to mask their pain, so much as they use their sense of ambition and drive. They work hard to accomplish their goals in hopes of making themselves and their loved ones proud. When the ENTJ is struggling with something internally, it is often easier for them to keep distracting by their actions and by working towards their more practical and real goals. They have a hard time accepting their emotions, but humor isn’t usually how they mask their feelings.

INTPs sometimes use humor to mask their pain, but other times they use it as a means of expressing it. Sometimes the INTP will make more sardonic or even self-deprecating jokes, as a means of sincerely showing their feelings just in a more dramatic tone. Often when they make these jokes it is so that they can let it out, without actually being vulnerable around others. INTPs have a hard time openly expressing their feelings, since they accepting them in the first place can be confusing for them at times.

ENTPs definitely mask their feelings and pain with humor, using this as an easy way to keep distracted. ENTPs aren’t naturally good at openly expressing themselves or their feelings, and so sometimes humor is the simplest way for them to deflect. They also use humor as a means of expressing themselves sometimes, without being vulnerable or really admitting that they mean what they are saying. ENTPs just don’t find it easy to really open up, and so sometimes humor is their means of covering up how they are feeling.

ISTJs don’t usually mask feelings with humor, as much as with sarcasm. ISTJs focus on getting things done, and try to distract themselves from inner emotions by working towards achieving their goals. ISTJs simply don’t like dwelling on their feelings, since they aren’t always logical or easy for them to solve. They want to focus on the problems which they can solve, instead of ones they simply have to accept. For them it humor isn’t usually used to deflect or mask pain, instead they use their sense of focus to do this.

ESTJs don’t use humor to mask their pain, as much as they use ambition to do this. They focus on getting things done and look at the problems they know they can solve. For the ESTJ it can be hard to process and accept their emotions, and so they can often neglect them. They don’t want these things to hold them back, or weigh them down in life. ESTJs struggle to really focus on emotions, since they don’t want to appear weak to those around them.

ISFJs don’t really mask their pain with humor, instead they just try to keep these things inside and focus on their practical tasks. ISFJs often cover up their own pain and feelings by focusing on the pain and needs of those around them. Instead of dwelling on what they personally have going on, the ISFJ tries to find ways to solve the problems of the people they love. Helping others can sometimes be the ISFJ crutch, and prevents them from focusing on themselves.

ESFJs do sometimes use humor as a way to mask their pain, but for them helping others is much more effective in this goal. They often focus on tending to the needs and emotions of those around them, and this distracts from their own internal struggles. ESFJs might not want to express their own feelings openly, and so instead they focus on the needs of those around them. Taking care of everyone else is often the way that ESFJ can mask their own pain, using the needs of others as an excuse to avoid themselves.

ISTPs do sometimes use sarcasm and even humor as a way to mask their own pain. They do struggle to really accept their own emotions and express them outwardly, and so they use other means of keeping themselves distracted. ISTPs also use their sense of adventure as a means of avoiding these negative feelings, seeking out entertainment and ways to really keep themselves distracted from what is going on inside of them.

ESTPs do sometimes use humor as a means of masking their pain, but this depends who they are around. ESTPs often need to have people they trust, and when they do they prefer expressing their feelings. If the ESTP is hurting they simply need to know that their vulnerability won’t be judged or make them feel worse. When they do, they can often express themselves openly without using humor or other things to deflect. When the ESTP doesn’t have this safe place, they are more likely to use reckless behavior as a means of distracting themselves.

ISFPs don’t like masking their pain or needing to hide how they are feeling from others. They prefer to be open about their emotions and express them to those they trust. ISFPs might use humor as a means of expressing themselves around others, but they don’t often use it as a mask. For the ISFP keeping things buried inside is truly toxic and something which is difficult for them to maintain.

ESFPs don’t like masking their pain, especially not by using humor as a means of deflecting. They prefer to have people they can share their feelings with and really let it out openly. For the ESFP it is more toxic to keep these feelings inside, than it is to express them to those around them. ESFPs would rather have people they trust to express themselves to, and in this case they are often open books.