Are You Good at Self-Promotion, According to Your Personality Type 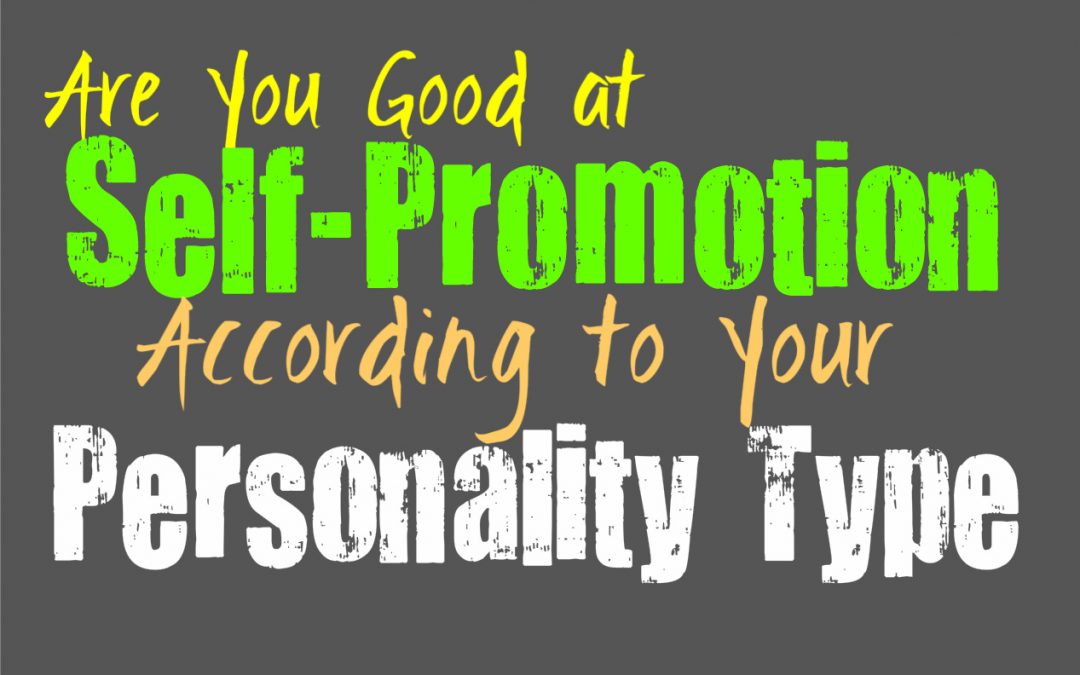 Are You Good at Self-Promotion, According to Your Personality Type

Some people are naturally good at self-promotion, and will know how to talk themselves up in order to get what they want or sell what they want. For others this can be challenging and might feel too pushy or insincere. While it isn’t a talent everyone has, self-promoting can be an important and valuable tool in most career advancement. Here is how good you are at self-promotion, based on your personality type.

INFJs aren’t usually fans of self-promotion, and can struggle to really find the right things to say. They don’t like feeling forced to talk themselves up, since this can often feel a bit insincere for them. Having to push themselves onto others and make them believe something, can feel a bit draining. INFJs are empathetic people who do often know the right things to say, the only problem they face is whether or not it feels right to actually go through with it. INFJs struggle with anything that feels morally wrong or forces them to do something that feels insincere for them.

ENFJs are often great at self-promotion, even in varying crowds and situations. They know the right words to say because they are so skilled at reading a room and understanding the people around them. This ability helps the ENFJ when it comes to self-promotion, especially when they are working towards a specific goal. There are times when self-promoting can feel a bit insincere and even draining for them, but they are willing to compromise their negative feelings sometimes when they need to get something truly important accomplished.

INFPs don’t often enjoy self-promotion when it doesn’t feel sincere or appropriate for them. If there is something they are truly passionate and excited about, then the INFP can be good at talking this up and really sharing it with others. For the INFP to really dive into self-promotion they have to mean everything they are saying and trying to convey to others. Most of the time though, the INFP will feel drained and annoyed by the idea of having to promote themselves to others in this type of insincere manner.

ENFPs are good at selling things if they truly want to, and so they can often be great at self-promotion. In most situations this isn’t something the ENFP enjoys doing, and so they might veer away from it. When there is something they truly want they are good at going after this and won’t be afraid of a little self-promotion. For the ENFP it is about expressing their sense of charm and really connecting with someone enough to prove their capabilities and strengths.

INTJs are often great at self-promotion, since they are very confident in their abilities. They are good at clearly conveying their strengths and showing their ability to always improve upon themselves. INTJs are strong-willed people who will go after what they want and refuse to allow foolish things to stand in their way. When there is something they want to accomplish they will certainly be capable of self-promotion in order to help them get there.

ENTJs are often excellent at self-promotion, especially when they are going after something important to them. They have goals that they seek to accomplish and will do just about anything to get there. When the ENTJ needs to execute a bit of self-promotion in order to get something done or get to where they want to be, they will certainly be skilled at doing this. They have a sense of confidence in their abilities which can shine through rather clearly.

INTPs aren’t often fans of self-promotion, since this can feel a bit forced and insincere for them. They would often rather their skills be something others can see clearly, instead of feeling like they need to prove themselves. Constantly feeling as if they have to prove their abilities to others can be rather draining for the INTP, and leave them feeling like they have already lose the battle before it even begins. For them self-promotion isn’t usually something they enjoy doing, but they will try their best if they feel it is necessary.

ENTPs are often capable of self-promotion, but can struggle to take it too seriously. They prefer to focus on their actions and allow them to really speak for them. If the ENTP feels like they need to self-promote in order to go after something they truly want, then they are often very good at this. They are expressing and charming people who are capable of finding the right words in order to really impress people and draw them in.

ISTJs are often capable of self-promotion since they learn from a young age that this is a necessary skill in order to get ahead in life. The ISTJ works hard to accomplish their goals and will do whatever it takes to improve their skills. When they need to self-promote in order to impress someone or climb their career ladder, they will certainly do what they must in order to be skilled at this. ISTJs know how to convey a sense of confidence in their abilities and will always be ready to improve themselves if need be.

ESTJs are often great at self-promotion, especially in situations where a sense of confidence is truly important. They know how to express their strength and determination in a way that is clear to those around them. ESTJs realize that self-promotion is often an important skill that will help them to advance in their careers and their lives in general. They want to be able to constantly keep moving forward without allowing anything to stand in their way.

ISFJs can sometimes struggle with self-promotion, especially if they are put on the spot with this requirement. They don’t really like feeling forced to talk themselves up and sometimes this can feel like arrogance for them. If the ISFJ has time to prepare and gather their thoughts, they will do their best to self-promote in a situation where this is necessary. They can be perfectionists and they don’t like allowing themselves to fail when it is truly important.

ESFJs aren’t often fans of self-promotion, especially when it is about something very personal. They can become uneasy when they feel like they have to convey a sense of pride and confidence, since this can feel more like arrogance for them. If they are in a situation where they need to self-promote in order to get something done, they will certainly push themselves to do this and will ultimately be good at it. What helps the ESFJ with self-promotion is sense of empathy and their ability to understand the emotions and needs of others.

ISTPs are capable of self-promotion if they feel the need to convey this to others. They can be good salespeople since they are charismatic people when they want to be social. They have an ability to really charm others and draw them in, which is definitely helpful when they trying to promote something about themselves. While ISTPs might not always have a strong desire to promote themselves, it is something they can certainly be good at.

ESTPs can definitely be good self-promoters when the situation calls for it. They are charismatic people who often make for great salespeople because of this. They enjoy connecting with others and are often comfortable being social and expressive. If the ESTP feels like they need to promote themselves in order to accomplish an important goal, they will certainly do whatever it takes to make this happen.

ISFPs aren’t usually fans of self-promotion since this can feel a bit insincere for them. They often do better having a loved ones do the promoting for them, especially when they are around new people. ISFPs just don’t like having to push themselves onto others, and might feel a bit anxious about this type of situation. They are often charming people when they are comfortable, but getting to this point often requires some sort of buffer.

ESFPs can definitely be good self-promoters when the situation calls for it. They are outgoing and charismatic people who simply enjoy having a good time. ESFPs might not necessary enjoy having to push specific promoting techniques onto people, since this is something that happens more naturally for them. They are good at making others like them and know how to have a truly larger than life presence in the room.