The Qualities Which Would Make You Good at Acting, Based on Your Personality Type 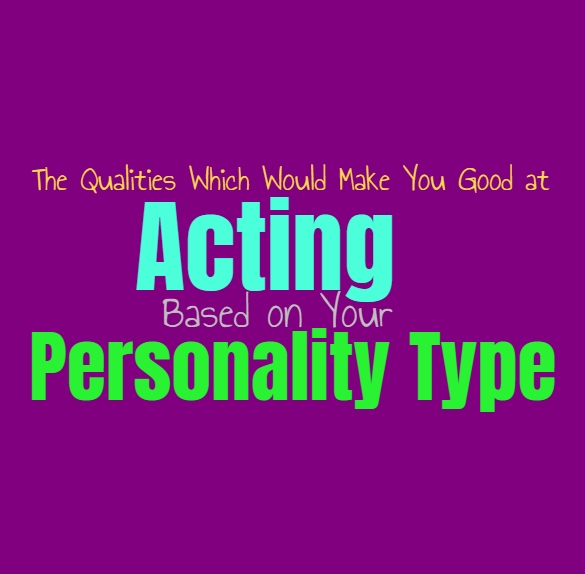 The Qualities Which Would Make You Good at Acting, Based on Your Personality Type

Each person has certain inner traits which might help them when it comes to a career in acting. Some people might struggle more with this than others, but there are certain traits which could be utilized to help them improve. Here are the qualities which would make you good at acting, based on your personality type.

INFJs have a strong sense of empathy and very vivid inner minds, which are the traits that can help them in an acting career. They can easily put themselves into the mindset of someone else, which is a great way to really strengthen whatever character they are playing. INFJs can connect with people and stories in a way that not everyone is capable of. If they want to seek out an acting career than their sense of empathy is definitely one of their greatest strengths. They also have vivid inner minds which can help them imagine different ideas and realities, ones that don’t exist.

ENFJs have a strong sense of empathy and are very outgoing people, and both of these traits can be very helpful in an acting career. Their ability to connect with others helps the ENFJ to put themselves into the place of their character without needing to actually have experienced these things. They can find themselves in someone else’s point of view simply by their strong ability to empathize and understand people. This is something which can help the ENFJ really dive into a character, even one which others might find difficult to understand.

INFPs have strong inner emotions, as well as rather vivid imaginations. Their sense of imagination helps the INFP put themselves into other realities and stories without it being much of a stretch for them. They also use their powerful array of inner emotions to really figure out how to understand their character and bring out those feelings they need to experience. They often have to connect with their own feelings in some way, but they can certainly use this to bring those out and make their performance powerful.

ENFPs have rather rich imaginations, and this is something which helps them immensely in an acting career. They can often imagine so many different scenarios, to the point where they almost believe it themselves. ENFPs are creative people who enjoy being playful, and so for them acting can be truly fun. The ability to put themselves into another reality and pretend for a while, is exciting and fun. ENFPs might not like the actual pressure of an acting career, but at the same time they can be sincerely good at it. They are friendly and creative people, who are eager to experience something new and exciting.

INTJs actually have rather vivid inner minds, and can imagine things in great detail. This incredibly deep inner world is what helps the INTJ when it comes to their acting performance. They can often use this world of theirs to imagine so many different scenarios and put themselves into another reality. INTJs actually have a creative and sometimes poetic side, which most people never get to see. If they do decide to dive into this career, their fortitude and inner worlds, are exactly what will help them.

ENTJs are strong-willed people and are very outgoing without even trying to be. They also have creative souls, they just don’t always have the chance to show this to others or really nurture this part of themselves. ENTJs can often use acting as a chance to let things out and really express themselves in another way. They can tap into these inner emotions without fear of being vulnerable, since they are pretending to be someone else. ENTJs can also use their charming personalities in order to take on this challenge without being afraid of it.

INTPs are creative people who have very active imaginations, which can be useful for their acting abilities. They often use their inner minds as a means of connecting to these scenarios which aren’t real. For the INTP it is natural to picture these other stories and characters, and so they can get into the mindset fairly well. They might struggle with feeling like they have to perform in front of others, but their skill lies within their imagination and sense of creativity. They will do their best to adapt and overcome any challenges, which can be very helpful.

ENTPs are charismatic and outgoing people, who are often capable of connecting with others. They enjoy challenging themselves and so acting is often another endeavor they can take on and hope to really grow because of. ENTPs can be great at acting since they are vibrant people with intense personalities. They enjoy being able to be a bit over the top, and so comedy can often be a place where they truly shine when it comes to their acting careers.

ISTJs might not focus their energy on a career like acting, since it can feel less like a sure and stable choice. But that doesn’t mean they are not capable of being good at it, or accomplishing it. ISTJs are strong-willed people who can often observe others and learn how to progress and advance in their careers. They work hard to get things done, no matter what it is they are working on. Their strength and willpower will help the ISTJ learn what they can about any career.

ESTJs are outgoing people who can often use their charisma as a means of helping them improve in their acting career. They can use this outgoing nature to help them connect with others, and do their best to perform perfectly. They can use this part of their personality to feel open to portray a character, without being too nervous about how others will respond. ESTJs also enjoy a challenge, which can help them take the risks and do their best to improve.

ISFJs are empathetic people and this sense of empathy is very helpful when it comes to their acting abilities. They can often put themselves into someone else’s mindset and this can help them to portray a certain emotion with ease. They can often understand others, even the people they don’t necessarily want to understand. This helps ISFJ connect to these different emotions and this can be a quality which makes them improve and become better at acting as well.

ESFJs are empathetic people who enjoy being able to connect with and understand others. They can use this empathetic nature to really understand different emotions and put themselves into the shoes of their character. This definitely helps them as actors, since they can portray these different emotions simply by connecting to that character and that mindset. They can find themselves feel completely different than usual, just because of this natural ability to understand and empathize.

ISTPs have a sense of charm to their personalities which can be useful when it comes to acting. They also find themselves eager to try out anything exciting, and enjoy taking on the challenge. ISTPs likely won’t be afraid of taking risks in their acting, which can be rather useful for them. They likely aren’t afraid of being embarrassed by it, and so they are willing to give it a real try without hesitation or constant fear.

For the ESTP acting can be a fun way to dive into another reality, and really pretend to be someone else. They enjoy anything which is thrilling and exciting for them, and do their best to experience things openly. They don’t like feeling held back by fear, and so they are often more open to taking risks in their acting. These risks can really help them improve and grow, and is certainly something which makes them better.

ISFPs have sensitive and artistic spirits, which can sometimes drawn them towards careers in theater. They enjoy being able to express different emotions and really dive into these other characters. They often need to connect the characters feelings to something they have experienced themselves, but they are good at being able to do this. They can find themselves caught up in these emotions and are often capable of expressing them in a vulnerable manner.

ESFPs are often very outgoing and friendly people, with charming personalities. This sense of charm and adventure is what can help them when it comes to being good at acting. They enjoy being able to put themselves in these different scenarios, and often thrive on the attention they receive. ESFPs can be great at being in the spotlight, especially when they are doing something they deeply love. As actors they often can connect to their inner emotions and use them to really make their character more alive and vibrant.