Do You Have a Tendency to be Affected by Negative Energy, Based on Your Personality Type 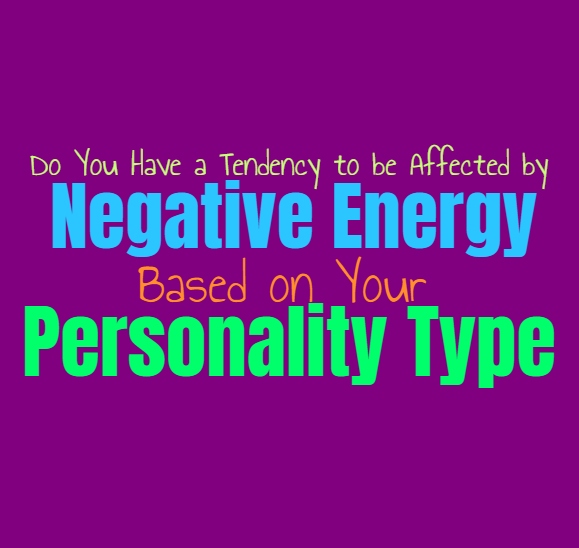 Do You Have a Tendency to be Affected by Negative Energy, Based on Your Personality Type

When someone is constantly negative and wants to nitpick the details of things, this can be something that affects those around them. Some people soak this up naturally, and can easily feel brought down by this type of behavior. Here is how likely you are to be affected by negativity, based on your personality type.

INFJs can certainly be brought down by negativity, and often feel it deeply. If they are surrounded by people who constantly pick at every detail it often causes the INFJ to feel worse about the situation. They do much better around positivity, because they certainly are receptive to the emotions of others. For the INFJ negativity and just dreary energy does bring them down a bit, but sometimes they find themselves going in the direction of these emotions anyways. They don’t always find themselves wanting to be sunshiny, and so something they are the ones possessing the more negative energy or emotions.

ENFJs can certainly feel weighed down by negativity, especially since they are so receptive to the emotions of others. When they have someone who is constantly negative then the ENFJ can easily feel this. It can be difficult for them to really shake these emotions, and so sometimes it leaves them feeling rather down about it. ENFJs often do their best to make others feel happy, and try to remove this negativity when they feel it. ENFJs do their best to problem solve and figure out where this negative energy is coming from so that they can make the situation better.

INFPs can definitely feel bogged down by negative energy, but they try not to let it overtake them. INFPs have such strong inner emotions and so they try to look inward and use their own feelings to center themselves. INFPs do have times when they are a bit negative themselves, and feel like really stewing in these emotions for a while, instead of being faced with someone who is overly positive in the face of something truly bad. For INFP it is important to have balance in their lives, and so sometimes it is okay for them to feel a bit negative or cynical.

ENFPs definitely have a hard time being around people to nitpick about the smallest things. They can easily feel weighed down and exhausted by this type of negative energy. The ENFP will attempt to remain positive at first, focusing on their own inner strength and emotions to get them through. They might even try to ignore this negativity around them, hoping to find ways to distract themselves and avoid it entirely. After a while it can be hard for them to keep denying what is around them, and so this can be frustrating for the ENFP who just doesn’t want to deal with the negative energy.

INTJs don’t like allowing the emotions or energy of other people to really affect them much. INTJs are often great at ignoring people and pushing aside what they say in order to focus on what matters to them. They are capable of taking useful advice and will be receptive to accurate information, but when someone is simply being negative the INTJ really doesn’t have time to waste on this. For them it is honestly difficult to be affected by the negativity of others, sometimes they merely take it as a challenge.

ENTJs are usually good at ignoring the negative energy or doubts of those around them. They focus on doing things their own way and might even take this negativity as a bit of a challenge. For the ENTJ it is important to always push forward and focus on maintaining their important goals in life. They don’t like being someone who falters simply because someone else is being nitpicky or negative about something. ENTJs do sometimes feel the negativity of their loved ones, but at the same time they want to prove them wrong.

INTPs often seem wrapped up in their own bubble, but that doesn’t mean they aren’t affected by the negative energy around them. For people who aren’t that in tune with emotions in an obvious way, they actually are deeply affected by people who are negative and nitpicky around them. INTPs are often searching for new ideas and things to explore, and so when people try and bring them down it can be rather frustrating. INTJs often do better around people who can inspire them to improve and continue moving forward.

ENTPs do sometimes feel brought down by negative energy, even though most people might not realize this. ENTPs want to be around people who inspire them and give them room to grow and be themselves. For the ENTP it is much more rewarding to be around these types of people, since the negative types can really make them feel uninspired and a bit trapped. They may not always realize that they are picking up on this negativity, but regardless it does still affect them.

ISTJs don’t usually allow other people’s emotions to hold them back or weigh them down. They can usually ignore when someone is being overly negative, and simply focus on doing things their own way. ISTJs want to get things done and focus on being efficient, for them emotions can simply get in the way of this. ISTJs are good at getting the job finished, and work towards building up their future. They aren’t focused on emotions and so someone who is bringing in negative energy can be easy for them to drown out of their mind.

ESTJs are often good at drowning out the noise around them and prefer to focus on getting things done. When people bring in negative energy the ESTJ might not even notice this for a while. They don’t focus much on emotions and so they do their best to ignore someone who is being constantly negative or emotional. ESTJs would rather focus on things which are practical and look at the situation from a logical mindset. When people come in and try to nitpick in a negative or useless way, the ESTJ often shuts them down and moves on.

ISFJs can certainly be affected by negative energy and sometimes struggle to really overcome this. They work hard to create a sense of peace and warmth in their environment, and so negativity is going to come in and ruin that feeling. The ISFJ will try their best to make this person more positive and hopefully solve whatever problems they have. If this does not work they will certainly feel weighed down by this constantly negative energy, and really will want to find a way to remove it somehow.

ESFJs are definitely affected by the emotions and negativity of others around them. If someone is constantly being negative it can deeply affect the ESFJ and really weighs them down. They need people around them who are positive and enthusiastic, without constant nitpicking and doubts. These things can make it hard for the ESFJ to focus on getting things done, and leaves them feeling constantly anxious and frustrated.

ISTPs don’t really like being around negative people, but they do their best to ignore their energy. ISTPs often want to be on their own so that they can avoid being around people who try and weigh them down. For them it is best to avoid the negativity in their lives and focus on moving forward. ISTPs live very much in the present moment and prefer to experience things which thrill and excite them.

ESTPs can certainly be dragged down by negative energy, especially when it comes their loved ones. When the people they care about are bringing them down it can be a bit draining for the ESTP. They want their loved ones to be positive about their endeavors, and they prefer to have their support. ESTPs are happiest around people who know how to bring in positivity and help increase their own mood.

ISFPs can certainly be brought down by constant negativity after a while, but at first they try to ignore it. ISFPs are often very positive and light-hearted people, who do their best to keep looking on the bright-side of things. ISFPs don’t like allowing negative energy to weigh them down, since they have such bright and positive spirits. They want to focus on things which bring them joy and give them a sense of belonging.

ESFP
ESFPs are often positive people who try to look on the bright-side of life. When they are around constantly negative people this can certainly start to bring them down after a while. They do their best to overcome any negativity and try to remain happy and positive through all of this. For the ESFP being around loved ones who constantly nitpick does leave them feeling unhappy and they will struggle to really overcome these feelings.