Are You Good at Giving Announcements, According to Your Personality Type 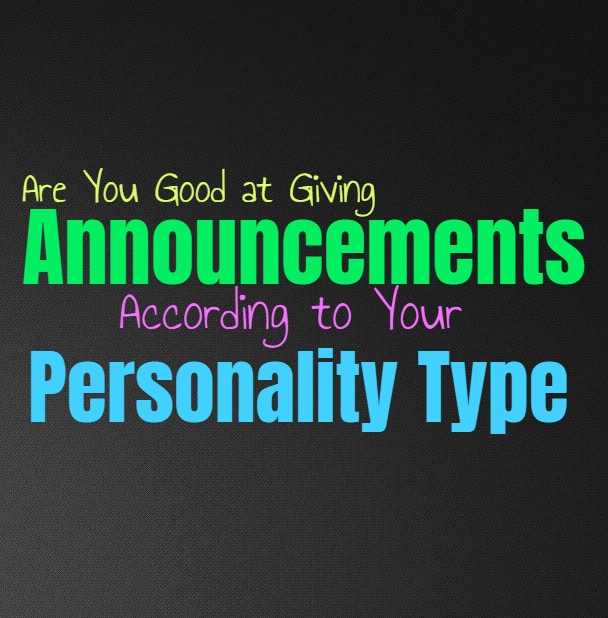 Are You Good at Giving Announcements, According to Your Personality Type

For some people having to give an announcement to others can feel like too much pressure, while some can do this with poise and complete confidence. Here is how good you are at giving announcements, based on your personality type,

INFJs are often capable of overcoming certain discomforts when they have to get something done, but making announcements can feel a bit draining for them. Anything which requires the INFJ to be the center of attention can leave them feeling a little bit overwhelmed. Having to get up and make an announcement about something important, likely feels like more pressure than they really want to deal with. They especially feel this way if it is something which might cause the INFJ to be blamed since people do have a tendency to get mad at the messenger.

INFPs will rarely enjoy having to make announcements, since they don’t like the pressure of having to explain something to others who might not be so happy with it. INFPs do enjoy making happy announcements though, and might like being able to get others excited about it as well. For the INFP the whole experience can be a bit draining for them though, especially the idea of having to speak about it publicly. An announcement with just their close loved ones is a different story, and can actually be enjoyable as long as it is something positive.

ENFPs often enjoy making announcements, and really don’t mind being the center of attention. They especially enjoy announcing something positive and exciting, and like being the one others look to for this information. ENFPs don’t usually became anxious having to be the one delivering information and can actually find it to be rewarding and fulfilling. They might not enjoy having to give out bad news, but they do their best to make the most of it and not let others make it too much of a big deal.

INTJs don’t mind giving announcements, especially if it is something they believe to be important. They are factual people who actually enjoy being able to share the truth with others and do their best to remove ignorance where they can. Sometimes making announcements can be a bit draining since they don’t really like social interaction and having to have all eyes on them, but the INTJ can handle this just fine. They will do their best to make everything clear and concise to that the people listening will understand and take something away from it.

ENTJs often enjoy giving announcements and like being able to draw attention to them for this. ENTJs aren’t afraid of being the center of attention and are rarely that afraid of what people might think. When it comes to making announcements the ENTJ will do their best to be accurate and precise with their words, and at the same time they don’t mind adding a bit of personality to it in order to make things a bit more interesting for the people listening.

INTPs are rarely the announcement type of people, unless they are announcing something deeply important to them. INTPs spend a lot of time and energy learning and analyzing information. They often have unique ideas and theories, but people don’t always listen or understand what they are trying to express. INTPs might enjoy giving an announcement which shows to everyone just how right they were about something, and enjoy being able to relish in this accomplishment for a short time.

ENTPs don’t mind making announcements and might even enjoy being the center of attention. They are likely to make these announcements with some added flair, wanting to see how people will respond. ENTPs sometimes push buttons and so if they are making an announcement which might work people up, it can be entertaining for them. ENTPs are outgoing people who don’t usually mind having to give certain speeches, especially if they have an opportunity to learn from it.

ISTJs don’t really like having to make announcements when it puts them in the spotlight. They will however, do whatever it takes to get the job done and perform their tasks to a high level of excellence. When the ISTJ is asked to make a certain announcement they do their best to perform properly and make sure their point comes across clearly. They are often high-achievers who believe in doing their best at everything they set their mind to. While they might dislike being the one giving announcements, they do their best to suck it up and get the job done.

ESTJs are often good at making announcements and even enjoy doing so. For them there is nothing unnerving about being the center of attention, especially if they are delivering an important message of sorts. When the ESTJ needs to make an important announcement they will do their best to be clear and concise, and deliver in a manner that keeps everyone engaged. While ESTJs do have sometimes big personalities, they want to be sure that they express things clearly and don’t get too wordy about it.

ISFJs usually don’t enjoy making announcements unless it is something exciting they are sharing with their loved ones. When they do have some sort of big and happy announcements then they enjoy being the one to deliver it. For the ISFJ it always rewarding to be the person who can bring a smile to someone else’s face and to make them happy in some way. If the ISFJ has to make an announcement which is negative, then they might struggle to actually deliver it and might want to put a positive spin on this.

ESFJs might enjoy giving announcements and they are often fairly good at it. They enjoy being able to express things in a way that is entertaining and exciting to others. ESFJs definitely enjoy making announcements about something happy, and will want to be able to really drag it out and make everyone even more hyped about the situation. When it comes to negative announcements or giving bad news, ESFJs are likely to try and put a positive spin on this, since they really dislike anything negative.

ISTPs don’t really like being the ones who have to make announcements, especially if it can lead to people becoming more curious about them. ISTPs would rather let things unfold on their own time, instead of having to make a big deal about it and announce it to others. Sometimes having to give some sort of announcement can feel like a lot of pressure, since they aren’t always sure how people will react or if their responses will be more exhausting for the ISTP.

ESTPs sometimes enjoy being the one to make announcements, especially when it is about something they are excited for. ESTPs are good at leading up to things and hyping things up a bit more in order to get others in on the excitement. For ESTPs it is really enjoyable to make the announcement sound even more thrilling and big than it probably is. For them making announcements can be a fun way to get excited about something, and to bring others in on the joy.

ESFPs usually enjoy making announcements, especially when it is about something good. When the ESFP is excited about something they want to make others just as happy about it too. They want to make people just as excited as they are, and so they are good at hyping people up. ESFPs don’t like giving negative announcements though, and so they will often try to put a more positive spin on these things or neglect to announce it entirely.