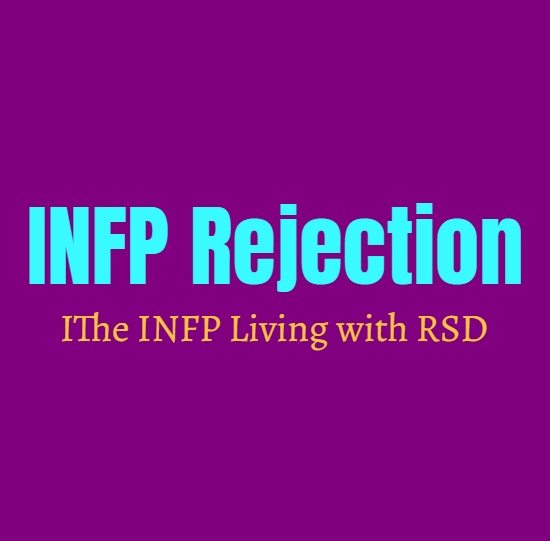 INFPs feel things very deeply and so dealing with rejection is definitely not something they are comfortable with. The INFP dealing with feeling rejected by someone they care for can feel a bit overwhelmed by these emotions and need time to retreat and reassess. For the INFP who is dealing with RSD this of course, becomes much worse and more challenging to cope with. Being that they are already sensitive to their emotions, for the INFP this is something which can certainly be overwhelming and emotionally exhausted if they are living with these types of symptoms. It is important to know the difference, as one of these conditions is much more severe than simply someone who doesn’t enjoy rejection.

For INFPs dealing with rejection can be a painful thing, as it can be for anyone. Since they experience emotions on such a deep and sincere level, it can be hard to process things which are painful like this. INFPs might try to avoid rejection when they can, not wanting to feel this type of negative emotion in their lives. Feeling as if someone has rejected them or turned them away, can feel like they have done something wrong themselves. They have a tendency to internalize, and so it becomes difficult for them to figure out the best ways to move on from these emotions. If the INFP does not take the time to process the ways they feel rejected, it can make them act out in the wrong ways. They will likely blame themselves and feel a sense of guilt, not feeling as if they are really good enough. INFPs can be rather hard on themselves, often much more so than people around them realize or can recognize. They might not admit this outwardly, but they do often put a lot of pressure on themselves to succeed at what they do. They want to be someone who others trust and believe in, and feeling rejected can really hurt because of this. If the INFP does not process that rejection they are likely to internalize it and blame themselves, instead of realizing that they need to really take a step back and cut themselves some slack.

RSD is something that people with ADHD or ADD can suffer with, and can be a rather debilitating thing to deal with. For these people it becomes beyond painful when they experience a sense of rejection, and causes them to continuously obsess over it. They can perceive a rejection which hasn’t really occurred, feeling as if someone has slighted them when it was not their intentions at all. They can feel like they have been criticised by people they love rather easily, and this is really too much for them to handle in those moments. It is something which comes on in random situations, which makes it hard to really seek out ways of moving forward or avoiding these situations. Their emotional response is going to be much more painful than it would be for others, which is something INFPs can already struggle with sometimes. This is why the INFP dealing with RSD can have a hard time putting themselves out there. They might want to avoid any kind of rejection or criticism, and can become somewhat reclusive because of it. Instead of putting themselves in new situations where they can find themselves hurt or rejected, the INFP is likely to spend time on their own away from these scenarios. They can seem to find ways to protect themselves, but this can also look like they have given up on living their lives. Instead of trying to please others or themselves, they become disinterested in making these attempts as they don’t want them to lead to rejection.

The INFP can also go into people pleasing mode, constantly searching out ways to be perfect for those around them. If they can do everything just right then maybe they can avoid feeling that criticism or rejection. Instead of showing their true selves, they portray an image which helps them avoid getting hurt or being seen as incapable. This is likely even harder for the INFP, since they already experience their emotions so strongly. They naturally want to please their loved ones, and so the INFP with RSD can feel overwhelmed rather easily by those types of emotions.

Someone who simply doesn’t want to experience rejection and tends to avoid it, can seek out help by exposing themselves to new situations. Finding ways to become confident in themselves and trust in who they are, is really the key for the INFP. They need to learn more about what their own goals are, instead of constantly seeking validation from their loved ones. The more comfortable they become with their own sense of inner morals and emotions, the easier it becomes to overcome any kind of rejection. Once they are secure in their own personal knowledge and self-awareness, they become secure with being unapologetic about who they are and what they do.