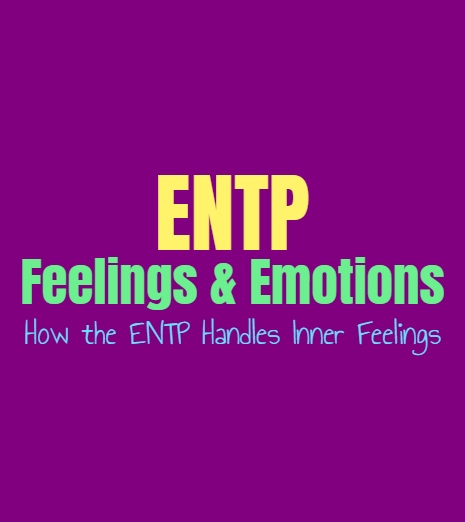 Many personality types who are more ruled by thinking and logic because stereotyped as unfeeling people. They can appear cold and distant, when in truth there is so much more to them. Each persona possess the capacity for logic, but they also possess inner emotions and feelings. They might not always allow those feelings to control their choices, they may even be afraid to embrace them. Regardless they still experience these emotions and feelings inside of them, sometimes even stronger than people realize or recognize.

They Tend to Deflect Emotions

ENTPs do have a tendency to deflect when it comes to emotions or emotional conversations. They don’t find it natural to connect with people’s feelings, since they don’t really know how to respond. When the situation goes too far into emotions or feelings, the ENTP has a tendency to find ways of deflecting. They often use humor as a means of avoiding complex emotional situations, not really knowing how else to deal with it. This isn’t because the ENTP doesn’t feel things or care about others. It is simply because they types of situations can be a bit frightening and uncomfortable for them. This is simply because emotions are something which are more challenging for the ENTP to process and find responses to. Instead of accepting these feelings they might find it easier to make jokes and deflect with humor.

Logic and reason is just more natural for the ENTP, these are things they can understand and utilize without confusion. They look at facts and information and come up with the right answers and responses to these things. When it comes to emotions the ENTP can be anxious and unsure of how to really respond, especially since they don’t want to upset the people they love at all. ENTPs sometimes feel like avoiding responding in emotional ways or of expressing these inner feelings is a safer way of dealing. ENTPs become uneasy when they need to open up about things, often disliking the idea of being vulnerable. They don’t want to feel judgement for expressing their emotions, and so it becomes something they try to avoid entirely. ENTPs do try to deflect in playful or comedic ways, so that it doesn’t upset anyone. They won’t do this aggressively, instead they will continue to make jokes and use their sense of humor as a means of avoiding the more emotional connections.

ENTPs actually do care deeply about their loved ones, and for them their focus of emotions is often outward. They might not use their extraverted feeling (Fe) as one of their stronger functions, but it isn’t their weakest of functions either. Being that it is in their tertiary placement, ENTPs do have somewhat of a grasp on this feeling function. They can often pay attention to the emotions of others, and care about helping them improve their lives. They might not want to focus completely on those feelings, but they will try to help by finding more practical means of taking care of the people close to them. ENTPs want to improve themselves constantly, but they also care about making a difference for the people around them.

For the ENTP it isn’t always easy to show how deeply they care, since the idea of being open and vulnerable can be a bit frightening for them. They don’t like feeling as if they have exposed too much, especially if it might be perceived the wrong way. While it might not be natural for them, ENTPs can express themselves better than most people think. They will sometimes do their best to overcome these fears and share themselves with someone they trust and care for. These moments may not be constant since they try to prioritize logic, but they are still there from time to time. ENTPs care deeply about those around them, even if they don’t constantly feel like showering them with outward expressions of these emotions and feelings.

While ENTPs might not be the most outwardly emotional people, they do actually have deep emotions which are hard to let go of. Once the ENTP cares for someone this is something which will last, something they don’t easily move on from. Their connections and bonds to others, are valuable and meaningful for them. When the ENTP has developed strong feelings towards someone, they don’t readily let go of these emotions. While people might see them as less emotional people, that doesn’t mean they don’t still feel things in ways that cannot be easily seen. When it comes to their inner emotions the ENTP does hold onto feelings for a long time, especially ones attached to something very personal and important to the ENTP. They won’t easily just pick up and move on from those feelings, likely harboring them inside for a long time.

Some of this can because ENTPs don’t easily dive into their own emotions, and so it can be difficult for them to process what is going on inside. Without taking the time to really process their feelings and understand them, the ENTP is likely to have a hard time letting go when they should. They might avoid these feelings for so long that they find it difficult to really understand what is going on inside. This avoidance sometimes makes their feelings grow even stronger, since they bottle them up for a long time. ENTPs don’t do this intentionally, it just can feel overwhelming to process these inner feelings like some personality types seem capable of.