INFJ Jealousy: How the INFJ Copes with Jealous Emotions 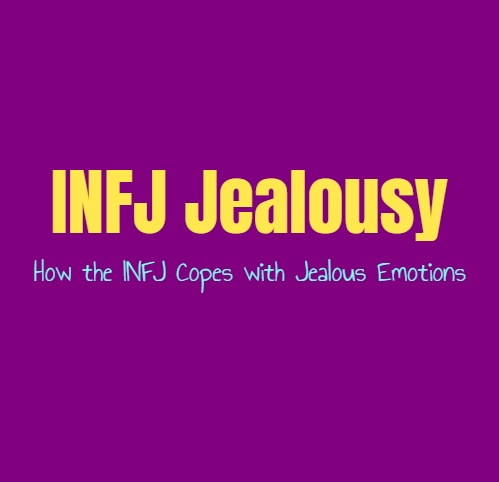 INFJ Jealousy: How the INFJ Copes with Jealous Emotions

INFJs actually can be a bit more prone to jealousy than some types, although this isn’t something they are proud of. INFJs are very personal people, who tend to keep a lot of their emotions and thoughts inside. They don’t feel comfortable sharing with most people and take a lot of time and patience for their walls to really come down. This can make it difficult for INFJs to accept or process certain emotions themselves, and so sometimes they can be more drawn to jealous behaviors and emotions.

When the INFJ cares about someone deeply, they take this connection very seriously. There are few people who the INFJ truly lets in and shows all of themselves to, and so they don’t want to lose these people from their lives. Because of this desire to keep certain special people close, the INFJ can become unknowingly jealous of that person. This is something which can cause the INFJ to become more possessive than they like or want to admit, towards the people they care for the most. They might find themselves getting angry at this person, without fully realizing why they are lashing out or becoming frustrated with them. The INFJ just doesn’t like feeling distanced from the people they care about most, and so this distant feeling makes them uneasy. They might be afraid of abandonment and afraid of having these special people taken away from them. The INFJ becomes jealous mostly out of fear- fear that they will lose the people who are most important to them. They just don’t want those connections slipping away and value them so deeply, which can cause them to act out in ways they are not proud of.

INFJs can also become a bit envious of their loved ones other friends and connections. They want to feel important to these people and so they find themselves feeling a bit jealous when they are happy spending time with someone else. While the INFJ knows this isn’t the most rational feeling to experience, they have a hard time even realizing where it is coming from. They just become anxious about the idea of losing someone who has seen them for who they are, and who accept what they see. When the INFJ feels like the things they love are being threatened then they have a hard time not experiencing this jealousy, sometimes stronger than even they realize or can accept.

INFJs who haven’t spent time analyzing their own emotions and responses, might lash out at those around them. The INFJ finds themselves becoming possessive when they are jealous of someone close to them, or even becomes angry at this person without meaning to be. INFJs can sometimes experience these emotions without fully understanding them, which is why it is important for them to take the time to really understand themselves and their own needs and emotions. When they are jealous that someone isn’t giving them appreciation or time, they can become distant but also find themselves saying things they don’t intend to say. The INFJ doesn’t like this about themselves, and so when they lash out it often causes them to retreat inward for a while. They become angry with their actions and blame themselves, feeling like they have done something horrible. INFJs are often harder on themselves than anyone else could be, and take a lot of guilt into their own hearts for not doing things perfectly.

INFJs can sometimes have a manipulative side to them, one which causes them to coerce people into feeling a certain way. They can say or do things which create the reactions they want, but sometimes this can be hurtful. The INFJ doesn’t intend for this to happen, and it is often only with INFJs who have not spent enough time reflecting inward in order to grow and become much more self-aware. The INFJ who lacks self-awareness is likely to respond to their jealous by being more manipulative in order to make people feel a sense of guilt over their actions.

The absolute best way for the INFJ to deal with their sense of jealousy, is simply be self-reflection. They need to take time with themselves to understand where these emotions are coming from and make sense of them in a more useful manner. While these emotions are not always positive ones, trying to bury them is not going to make the feelings go away. The INFJ needs to work towards understanding themselves and their feelings so that they can avoid lashing out in ways they will deeply regret later on. They need to learn not to place blame when this happens- not to blame themselves or those around them for feeling jealous. While the INFJ does not need to chastise themselves for feeling this way, they also need to let go of their anger over the situation. Being jealous is a perfectly natural emotion, it is how we respond to this and deal with it which matters most. When the INFJ can learn to sift through these feelings and accept them, then they can work towards responding to them in a healthy and functional manner.