INFPs Jobs & Career Matches: How to Find the Best Job For the INFP 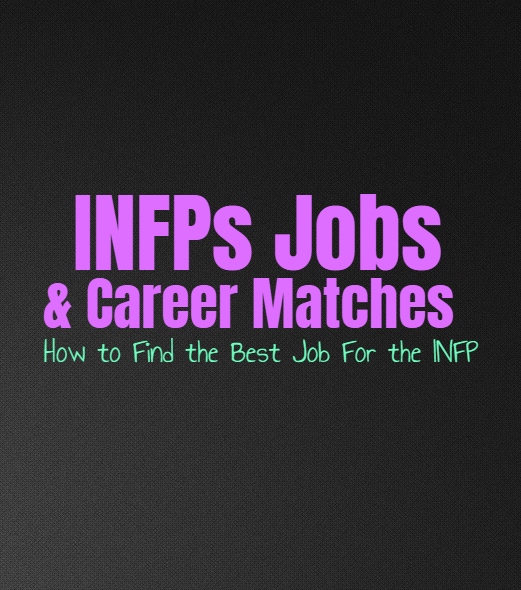 INFPs Jobs & Career Matches: How to Find the Best Job For the INFP

For the INFP finding a career which fulfills them is something truly important but can also be rather challenging. They don’t want to work in just any job which feels a bit like slaving for someone else’s benefit. Many career choices seem draining and just bland to the INFP, and this really isn’t what they are looking for. They need something which makes them feel as if they are making a difference, since INFPs want to serve a purpose in their actions. They often feel this need to make a real difference in the world around them, and so a career which feels meaningless is going to make the INFP rather unhappy.

Career Choices for the INFP

While it is important to remember that each individual is different, there are sometimes helpful ways to learn more about which paths might be suitable for each type. Knowing your personality type is simply a tool to help you understand yourself and your own processes much better. For the INFP there are many careers which might fulfill them, and some unexpected ones they might find rewarding as well. Just because there are a handful of careers which are generally more enjoyable for the INFP, that doesn’t mean they should block themselves into only exploring these options. INFPs are curious people and so being able to explore different sides of themselves and different choices, can be exciting for them. They shouldn’t be blocked into to only the expected, and need to be free to explore. Understanding their own inner desires is important for them, and so they need to take this time to really process their needs and feelings before making these big choices or feeling buried by them.

It is true that the artistic spirit of the INFP makes them drawn the arts much more often. They are often talented in many different expressive areas, whether it be music, art or writing. For the INFPs these type of careers can allow them to explore their emotions and allow their dreams to really take hold. INFPs are often proficient writers, since they such creative inner worlds and thoughts. Being able to use this in-depth inner world is something which can aid the INFP when it comes to writing, or most of their art inspirations. While these careers might be more difficult ones to break into, the INFP doesn’t necessarily need to be successful in the eyes of the world, only in their own hearts. They need to be free to follow their dreams even if others do not understand this about them. As long as the INFP gains some sort of fulfillment from being able to share their art with others, then it will be a much more rewarding career choice for them.

Because of their creative abilities INFPs can also be excellent in advertising careers. They are good at coming up with new ideas and creative ways of marketing to people. INFPs don’t like doing this in a dishonest manner, but their sincerity actually is something which people respond rather well to. They can often come up with genuine and unique advertising strategies, ones which leave people excited and eager to see what else they have to offer.

INFPs often make for excellent teachers, often even better with children. INFPs enjoy helping people and they thrive when they feel a sense of purpose in their careers. If the INFP can witness their teaching and guidance actually making a difference for someone, it will leave them feeling deeply touched and rewarding. Just being able to positively impact the lives of others truly fills the INFP with a sense of purpose. They don’t want to be someone who works in a career which cannot actually have a positive effect on the world, and so for them teaching can really fill that space and make them feel like they can help people learn and grow.

INFPs are likely to be more than just a teacher who explains the material and moves on. Instead they want to be the teacher that their students turn to for bigger issues. They want to be someone who can help teach them bigger lessons, ones which help them grow as people. INFPs want to inspire their students to ask questions and express curiosity towards the world around them. The last thing they want to do is stifle people, since INFPs hate feelings held back themselves. They often want to teach their students to continue dreaming, and to be themselves without fear of judgement.

INFPs do often make for great counselors, since they are excellent at listening to others. INFPs can offer a safe place for their patients to talk about their feelings and express themselves without judgement. INFPs care about people, and so being able to listen to them and be supportive is rewarding for them. Counseling  can be a great career choices since INFPs often do know how to set the right boundaries. They will be supportive and helpful when they are with their patients, but can often find ways to living their lives without allowing the problems of others to affect them outside of the workplace. This is actually a positive thing since it helps the INFP do their job well, and not allow this to ruin their daily lives or prevent them from living in a healthy manner.

INFPs often enjoy being around animals, sometimes more than around people. Since human interaction can be draining for them after a while, they often feel a sense of peace when they are working with animals. INFPs also enjoy being able to help and care for those who cannot care for themselves, which is why tending to animals can be rewarding for them.  Being able to be around animals and find ways to help them, is something which would truly give the INFP a sense of positive purpose. While for some it might not seem like a big deal, to most INFPs it is just as important and valuable as caring for humans. Maybe even more of a positive thing since animals require someone else to stand up for them, and INFPs deeply care about being able to stand up for those who cannot do this for themselves.

For the INFP some of the worst careers are ones in sales, or in the service industry. Having to deal with shallow or short-tempered people on a constant basis is rather draining for the INFP. They don’t enjoy having to sell things to people, or push certain products on them without being sincere about what they are trying to sell. Because of this INFPs really don’t benefit from sales positions, and do best when they can avoid these types of careers.

INFPs also don’t enjoy retail careers, even if they become the manager and continue to have room for growth they will often feel drained by it. They need to avoid these types of job in most situations, or else they don’t feel a sense of purpose and fulfilling in their careers. While they might be able to find this joy in other areas of their lives, the INFP needs to have this in their jobs as well.

The INFPs has many strengths, including their creativity, intuition and sense of morals. They have a deep consideration for others and want to make a difference in the world around them. They won’t settle for mediocre choices and want to always strive to do the right thing. INFPs are also deeply passionate about, which means when they find the right career they will thrive and be eager to improve. They care about doing well when they are working in a career which rewards them and feels worthwhile. In these situations the INFPs will give everything to being the best they can and to truly being successful.

The weaknesses for the INFP often lie within their occasionally lack of motivation and sometimes idealistic mindset. They can be hard to please when it comes to certain situations, never truly feeling like they can simply settle for less. INFPs strive to reach for the stars, wanting to continue to hope and dream. These are certainly strengths, but can reach a point where the INFP loses sight of what is right in front of them. Ultimately this means that careers which don’t stimulate their minds and imagination, will leave them feeling a complete lack of motivation and inspiration.