Are You Good at Creating Buzz, Based on Your Personality Type 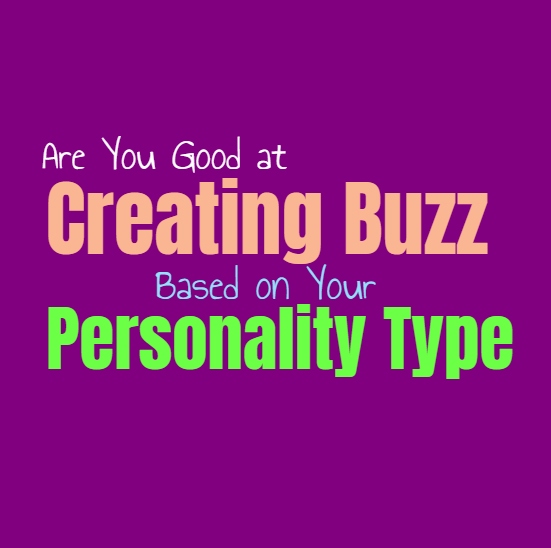 Are You Good at Creating Buzz, Based on Your Personality Type

Some people are amazing at creating a buzz and can hype up just about anything. This makes them good in advertising and PR careers, since they know how to entice people. Here is how good you are at generating buzz, based on your personality type.

INFJs are good at doing what they can to get people excited for something, but they don’t like doing this without sincerity. They can generate buzz by coming up with creative ways to explain something, and are good at showing their own enthusiasm. INFJs are more likely to enjoy creating buzz when it comes to their loved ones, and really want to do what they can to show just how wonderful these people are. For the INFJ generating buzz isn’t rewarding when they feel forced or obligated to do so, only when they are sincerely connected to the thing they are hyping up.

ENFJs are often excellent at generating buzz, especially when they are inspired by something. They do their best to figure out and navigate the best way to get others excited about things. ENFJs understand people and learn how to respond based on how others feel about a subject. They work around the hurdles and find ways to really bring others into the joy and enthusiasm they are feeling towards a certain thing. For the ENFJ generating buzz simply means finding ways to bring out the best in something or someone, and they are great at this.

INFPs are often good at inspiring others and can certainly create buzz when they are personally excited about something. However, INFPs aren’t great at creating buzz or hype over something they aren’t personally interested in. For them this feels completely insincere and inauthentic, which simply does not represent the INFP and who they are. They need to be capable of following their moral compass, and sometimes that means they don’t find themselves wanting to generate buzz for something they don’t believe in.

ENFPs are definitely good at creating buzz, especially for something they are excited about. ENFPs believe in following their hearts and sometimes that means bringing others into their bubble of enthusiasm. If they are truly inspired by something then they are often amazing at making others feel the same way. ENFPs are expressive people who can use their charming personalities in order to create a sense of buzz and excitement for something. ENFPs are capable of doing this for just about anything, but might not want to unless they are personally interested in the topic at hand.

INTJs don’t really like feeling the need to generate a manufactured buzz, but that doesn’t mean they aren’t capable of it. INTJs do things based on study and research, and so this is likely how they learn to create a sense of hype or buzz over something. INTJs prefer to get things done and be as efficient as possible, but sometimes this means going out of their comfort zone sometimes. When the INTJ realizes that they should generate buzz for something, they use proven methods in order to get this done.

ENTJs do enjoy being able to create buzz, especially over something important to them. They often do this when it comes to some sort of work accomplishment, and so they want to do their best to get the word out there. ENTJs are efficient people who study and learn every way to solve the problems in front of them. They can generate buzz but often use proven methods which they have learned in the past in order to do this efficiently.

INTPs can often figure out ways in which they can generate hype, but they don’t always find the inspiration to follow through. They are good at observing a situation and finding ways to problem solve in order to move forward. The INTP might be great at figuring out the methods in order to really create buzz, but sometimes they find it easier to be the person giving instructions, rather than really pushing to create this buzz.

ENTPs are great at creating buzz, especially when they are excited about something. They know how to inspire others and create a sense of enthusiasm. ENTPs are also charming people and this can certainly be used to their advantage in these situations. ENTPs can use their sense of creativity in order to find ways to really generate a sense of buzz over something. ENTPs can make for great sales people because of their ability to hype things up, even though they are likely to become bored of this after a while.

ISTJs don’t really like feeling like they need to create buzz, since they would rather their work speak for itself. They are driven and focused people who believe in working hard and getting things done efficiently. When it comes to having to create a sense of hype the ISTJ might find this to be exhausting and a bit foolish. They would rather just get things done and not feel this need to create some sort of false excitement over it.

ESTJs aren’t usually fans of generating buzz, since this isn’t something they personally want to invest their energy in. They often believe in working hard to get things done, and allowing their sense of efficiency to be what gets them far in life. Having to manufacture some sort of hype of buzz over something, feels a bit draining and even a bit foolish to the ESTJ. They become drained with these types of tasks, and would rather just be upfront about things.

ISFJ
ISFJs are good at creating excitement when they have to, but it can feel a bit draining for them. They focus on getting things done and work hard to be near perfect at everything they do. If they have to generate some sort of excitement or hype over something, it can feel a bit draining. ISFJs can however find ways to inspire others, and do their best to express things in an enthusiastic manner.

ESFJs are often create a generating buzz over something, and this is something which comes naturally for them. They often want to navigate the territory first and figure out the best way to get others excited about whatever product or person they are trying to hype up. ESFJs know how to connect with people and this is what helps them to create buzz, even over things that might not naturally be that inspiring.

ISTPs don’t really enjoy having to generate buzz over something, especially if they aren’t personally excited about it. They often prefer to let people see for themselves, instead of trying to manufacture hype over something. This can feel both boring and draining for the ISTP, and really isn’t something they personally enjoy. They are charming people which is something that often helps them hype things up to others, if they chose to do so.

ESTPs are good at expressing enthusiasm when they are excited about something in a sincere way. They know how to charm others and really bring them into their current sense of hype. ESTPs don’t enjoy feeling obligated to do this, but they are often capable of it when they want to. If the ESTP has a sincere reason to generate hype over something, they are often great at spreading the word and getting people involved.

ISFPs aren’t really fans of creating a buzz, especially when it comes to themselves. They prefer to let people find what inspires them, instead of trying to force them to feel a certain way. For the ISFP it is best to follow their heart, and so this means doing things in a more moral way. They would rather do their own thing, and allow others to discover what inspires them without some sort of fake hype of buzz.

ESFPs are excellent at creating buzz, since they are charming and enthusiastic people. They are great at generating a sense of excitement over just about anything and they often enjoy doing this. ESFPs make for excellent sale people because of their ability to generate buzz and excitement over even the smallest of things. They really just want to live their lives in the moment and enjoy things, and they are good at bringing others into this sense of excitement.