The Struggles You Face With Tempering Expectations, Based on Your Personality Type 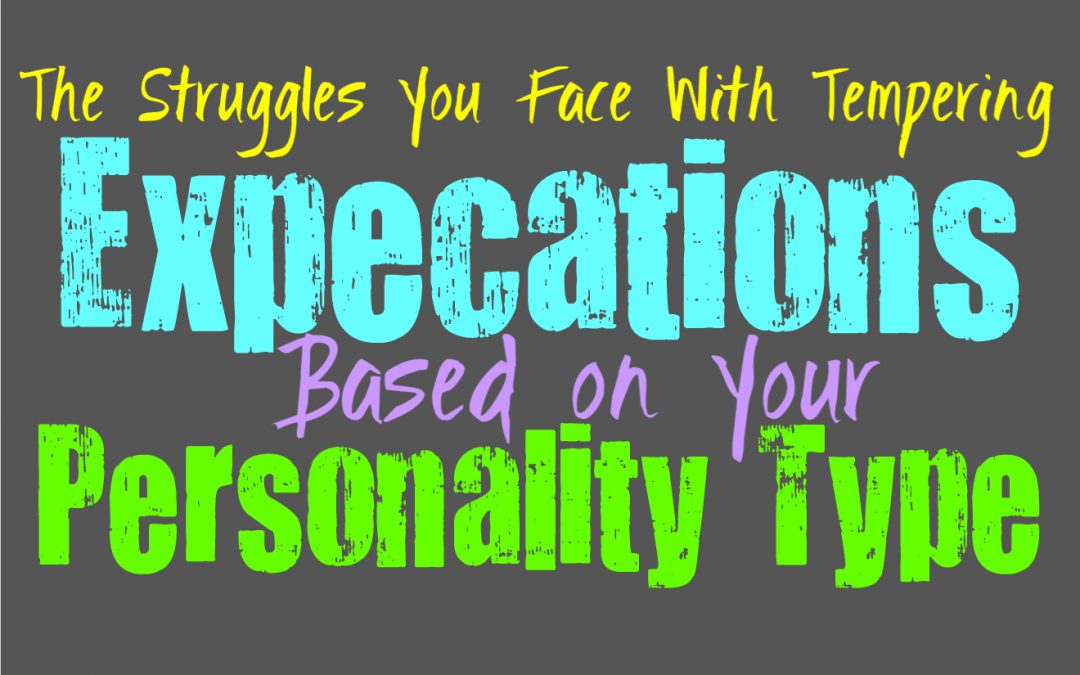 The Struggles You Face With Tempering Expectations, Based on Your Personality Type

For some people it is easy to hold back their expectations and prepare themselves for the worst. Other people find themselves constantly seeking out the positive, but sometimes this can cause them to be easily disappointed when things don’t go as they had hoped. Here is how good you are at tempering your expectation’s, based on your personality type.

INFJs are definitely good at tempering their expectation’s with most things in life, since they are highly intuitive people. They also might have a more cynical side to them, which causes the INFJ to expect the worst instead of always planning for things to work out perfectly. They often recognize disappointment and understand that life doesn’t always go as they might hope. This helps them to really control their expectations when it comes to most things in life. Occasionally the INFJ might get their hopes up for something they truly desire, and in these situations it can be difficult for them to really control those expectations.

ENFJs are usually good at tempering their expectations, mostly because they like to be prepared for things. Their intuition often helps them to gauge how things will go, which helps the ENFJ decide whether they should really get excited about something just yet. They prefer to keep themselves prepared for anything, just in case a situation doesn’t go their way. They work hard to provide for their loved ones and want to do whatever it takes to have back up plans for the future. Instead of just getting excited about something, ENFJs want to prepare so that they can really enjoy when it all works out.

INFPs can sometimes struggle to contain their excitement, especially if there is something they are really looking forward to. INFPs try to prepare for things but sometimes their emotions can get the better of them. They just aren’t naturally good at preparing or planning for things, even though their intuition can sometimes help them figure out potential outcomes. For the INFP it can be a constant battle between their heart and their head, which causes them to go back and forth with their ability to contain their expectations for something.

ENFPs can certainly struggle to really contain their expectations when there is something they are deeply looking forward to. ENFPs can have a cynical side though, where they might try their best to restrain any excitement or anticipation towards something. If they have experienced a lot of let downs they might have a hard time really allowing themselves to get excited for something in the future. The ENFP will do their best to hold in their excitement, but at the same time their emotions can sometimes get the better of them.

INTJs are often excellent at tempering their expectations, or even the expectations of others. They simply don’t believe in letting their emotions take charge, and instead they want to prepare themselves for anything. INTJs realize that life isn’t always perfect, and instead of being optimists they are more likely realists. They don’t want their expectations to cause them to lose sight of reality, and keep them from actually preparing for situations. For the INTJ it is better to prepare and ensure that they can build the future they want, no matter what might stand in their way.

ENTJs try not to let their expectations get out of hand, since they strive to be more realistic about things. Most of the time they focus on the facts and work hard to prepare for the future and what might occur. ENTJs are usually very practical people and so they realize that sometimes things might not go as expected. They try to prepare for these situations so that they can accomplish the goals they set forth. There are times when the ENTJ might be truly excited about something, and on those occasions they can struggle to really control those expectations.

INTPs are usually capable of tempering their expectations, since most of the time they can have a rather cynical outlook. INTPs might be fearful of anything that seems too good to be true, instead they want to consider the possible ways this situations could go wrong. The mind of the INTP is often filled with so many different paths and ideas, and so they certainly aren’t incapable of tempering their own expectations or even the expectations of others. They will be capable of seeing how things could go wrong, and realize that in order to accomplish what they want it requires plenty of forethought.

ENTPs are often capable of tempering their expectations with most things, at least in a more intuitive manner. They realize that there are so many potential paths in a situation, and so their minds will often run through these different scenarios. ENTPs usually can see how things might go wrong, and this helps them to control their expectations enough to plan for these situations. While most of the time they can keep control of these emotions, there are some situation where the ENTP becomes a bit too eager to really maintain their expectations as much as they would like.

ISTJs are often very good at tempering their expectations, since they prefer to be prepared for everything. ISTJs don’t like simply believe something will go their way, instead they want to consider all of the ways it could go wrong. This helps them to prepare for these outcomes in order to ensure the best results. For the ISTJs it isn’t about being pessimistic, it is about preparing for the possible failures so that they can avoid them completely.

ESTJs are often good at tempering their expectations in order to create the future they desire. Instead of simply believing that everything will go right, they do their best to prepare for the opposite. ESTJs want to be ready for anything and so in order to do this they need to approach things from a more factual and logical point of view. Instead of just allowing themselves to get overly excited for something, they will consider the ways that something might not go in their favor and then prepare for a way to avoid that situation.

ISFJs are often fairly good at tempering expectations, mostly because they want to prepare for when things might go wrong. They want to do whatever it takes to take care of their loved ones and make sure they are happy. Sometimes this means they need to prepare for when things go wrong, so that they can protect the ones around them. ISFJs don’t have the luxury of allowing their expectations to run away from them, instead they need to focus on taking care of others and preparing for the worst.

ESFJs are usually good at preparing for the worst and so they are often capable of tempering their expectations. Most of the time ESFJs will do their best to prepare for what might go wrong, so that they can prevent this entirely. They want to take care of their loved ones and work hard to protect the people in their lives. This desire to take care of others and make them happy, is often why the ESFJ simply does not have the luxury of allowing their emotions to run away with them.

ISTPs are logical people and so this often helps them temper their own expectations a bit. When there is obvious reasons why something might go wrong, the ISTP will contain their excitement about this. When they don’t see clear facts showing that something should go wrong, they might get a bit excited about it. ISTPs live in the moment which is a big reason why their expectations can sometimes take control of them. They get excited about certain things since they enjoy focusing on the present and allowing these things to inspire them.

ESTPs can sometimes struggle to really temper their expectations, since they live so much in the present moment. If they can logically see how things will most likely go badly, they will definitely be capable of containing their excitement. When the ESTP cannot see obvious facts proving that a situation won’t turn out how they want, then they might struggle to control their expectations for the future. They enjoy getting excited about things and live much more in the present than they do the future.

ISFPs can sometimes struggle to really temper their expectations, since they lead with their hearts most of the time. They often become excited about something and it can be challenging for them to really contain this. ISFPs enjoy diving into new things and want to really experience life to the fullest. They have a hard time preparing for the future and instead focus on the living in the present. This focus on their surroundings and their emotions, definitely makes it difficult for them to temper their expectations.

ESFPs definitely struggle to really temper their expectations, since they follow their hearts so much in life. They become so caught up in the moment that they struggle to really focus on what might go wrong in a situation. When the ESFP is passionate and excited about something it can be really difficult for them to contain their excitement and focus on how things might not turn out their way.