Here’s How You Handle Being Interrupted, Based on Your Personality Type 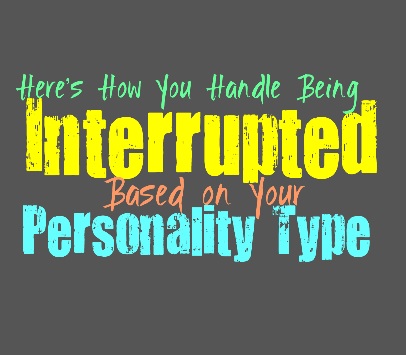 Here’s How You Handle Being Interrupted, Based on Your Personality Type

While no one truly enjoys being interrupted, some people handle it better than others. To some it is simply a messy conversation and they don’t mind, to others it is rude and upsetting. Here is how feel about being interrupted, based on your personality type.

INFJs definitely don’t appreciate being interrupting, but this might happen to them often. They aren’t likely to bulldoze into a conversation and take over, so sometimes they wind up feeling ignored. For the INFJ it is draining to have to force their way into a conversation, and if someone consistently interrupts they are likely to avoid them at all costs. Being around someone who cannot seem to control themselves in conversations is sincerely exhausting and annoying for INFJs. They would rather find people they can connect with who are capable of a healthy back and forth.

ENFJs are rarely afraid of taking charge of a conversation, especially with someone who constantly interrupts. ENFJs will often interrupt right back in order to keep up with the conversation. They can sometimes be a bit high energy when they are discussing something they are passionate about, and this means ENFJs aren’t afraid of taking control if need be. They enjoy connecting with people on a deeper level, but ENFJs are naturally friendly which means getting along with all kinds of people.

INFPs really don’t appreciate people who constantly interrupt during conversations. This type of behavior is seen as rude and exhausting to them most of the time. If someone simply is excited about their conversation and wants to connect with the INFP, this is often a bit different for them. They can handle certain interruptions, especially from someone they feel a deep connection with. If someone is simply being rude and trying to take charge, the INFP will become extremely drained by this. They might even try to find a way charm everyone so that they can take charge instead of the constant interrupter.

ENFPs really don’t like people who constantly interrupt, but they don’t like starting drama by calling them out. They are more likely to take charge of the conversation by talking over that person if they have to. ENFPs want to make it clear that they are part of the conversation and don’t let others push them around. They aren’t afraid of standing their ground, they just might try to do this in a less aggressive manner than some others might. ENFPs often prefer to be around people who know how to listen, but they can find ways around people who interrupt.

INTJs definitely don’t appreciate being around rude people who constantly interrupt them. They are likely to set clear boundaries when it comes to things that frustrate or drain them. INTJs don’t like allowing people to walk all over them, especially if they are doing it on purpose. They will attempt to make their feelings known so that the individual can hopefully correct their behavior. INTJs aren’t always patient when people are clearly being rude, and will often want to avoid those people entirely.

ENTJs aren’t often bothered by people who interrupt in conversation, since they are naturally capable of taking charge. When the ENTJ feels like someone constantly interrupts, they will simply do their best to navigate the conversation. They are naturally social people who can often find ways of working around other people’s behaviors. ENTJs will eventually become annoyed if someone constantly interrupts them, especially when they are trying to get something done. They are efficient people who do their best to get things done in a timely fashion, and when people stand in their way it’s definitely going to frustrate them.

When the INTP is around people who constantly interrupt them they will definitely become impatient. They need plenty of time to themselves in order to recharge and feel more at ease with themselves. INTPs definitely become annoyed with people who interrupt them or invade their personal space. They will often do their best to avoid drama, but eventually they will lose their patience. INTPs can be very stern and direct when they are trying to express to someone that their boundaries are being crossed.

ENTPs can often navigate the behavior of others, especially people who tend to interrupt. ENTPs can often shut that person down if they are being rude, especially in front of others. They don’t like allowing others to hold them back, and will definitely be capable of taking charge of a situation. If someone constantly interrupts the ENTP they will likely want to avoid them, or find a way to take control so that person backs off. They aren’t afraid of cutting people out of their lives if that person is being consistently rude, since ENTPs are often very independent people.

ISTJs strongly dislike interruptions, especially from people who continue to push their boundaries. ISTJs are efficient people who strive to get things done the best that they can, and constant interruptions can stand in the way of this. Someone who does not respect their privacy or their need for space, is likely to cause the ISTJ to lose their patience. They aren’t afraid of making their feelings known and will certainly push back to make this person stop.

ESTJs are efficient people who strive to get things done as best they can. When people stand in their way they can become very frustrated and will likely lose their patience. ESTJs don’t like when someone constantly interrupts them and pushes their buttons, and will often make this known. ESTJs aren’t afraid of telling someone off, especially if that person is being consistently rude to them.

ISFJs are polite people, and because of this they often become annoyed with individuals who interrupt constantly. They won’t want to say anything or create drama, since ISFJs prefer to keep the peace. If they are constantly interrupted they will likely want to avoid this person instead of push back. ISFJs do have a line though and will eventually become frustrated by this person’s rude behavior. If this individuals upsets their loved ones then the ISFJ will feel the need to say something.

ESFJs really don’t like being interrupted, especially if they are saying or doing something important. They do their best to get things done, and strive to take care of their loved ones. If they are around someone who doesn’t respect their loved ones the ESFJ will likely feel the need to say something or do something. They don’t like when people are pushy or rude, especially towards someone the ESFJ cares for. They can sometimes lose their patience in these situations, and prefer to do their best to take care of others.

ISTPs don’t appreciate when someone constantly interrupts them, especially when they are trying to be alone. ISTPs need plenty of time to themselves and become drained if they don’t get this. They will often try to avoid people like this so that they can avoid the drama entirely. They would rather spend their time with people who understand them and give them the space that they truly need.

ESTPs often handle being interrupted surprisingly well, and might not even recognize it. They live in the moment and are often very social people. They do their best to keep up with active conversations and don’t mind people who have a similar energy. If the ESTP is interrupted they will likely just interrupt that person right back. They don’t usually back down but they aren’t afraid of taking charge of the conversation.

ISFPs try not to become upset by people who interrupt, especially if it isn’t intentional. They live their lives in the moment and don’t like letting things upset them too much. ISFPs will do need space though, and being constantly interrupted will likely make them feel overwhelmed. They need time and space to recharge and feel like themselves once again. For the ISFP it is best to try and keep the peace, but they might have to avoid people who interrupt constantly.

ESFPs don’t often mind being interrupted a little bit, since they can often keep up with these type of conversations. ESFPs don’t try to let things bother them so easily and prefer to enjoy being social and interacting with others. They want to be able to keep up with a conversation and will likely just interrupt right back. The ESFP isn’t afraid of speaking their mind and will certainly make their feelings clear about someone who continues to be rude.