INFJ Under Stress (Shadow Mode): The INFJs Unhealthy Dark Side 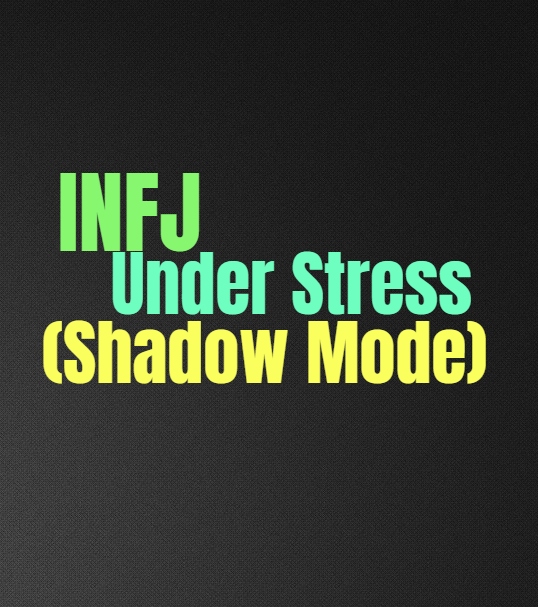 INFJ Under Stress (Shadow Mode): The INFJs Unhealthy Dark Side

For the INFJ being in their shadow happens under times of extreme stress, but it can be rather exhausting to dive into these shadow functions. INFJs are often thrown out of their normal functions by these times of being under pressure, and will behave much different than their usual selves. They try their best to make sense of, often feeling a sense of guilt when this occurs. When the INFJ goes into their shadow mode, it often is not their fault, but it can happen from not tending to their own needs for too long as well. When these stressful times approach, it can force the INFJ into their shadow mode since they no longer has the same trust in their usual way of doing things. When the normal pattern of behavior doesn’t work or causes too many problems, the INFJ might find themselves experience somewhat of a crisis of faith.

INFJs dominant function is their Ni (introverted intuition), which helps them collect data over time. This helps the INFJ to come up with future conclusions and predict certain things in a way which often surprises others. To most this seems like some sort of magical psychic ability, and in most cases the INFJ isn’t really aware of where this information comes from. While it might seem magical, it is simply the way the INFJ stores and collects information in a subconscious manner. Their minds are very in tune with things and will remember all of these details and facts, compiling this all together in a way which helps the INFJ get a better idea of what will likely happen down the line. It is a powerful intuition, but it has perfectly logical explanations to why it occurs. This can be confusing sometimes because the INFJ doesn’t always have ways of explaining where these details come from, since this is done a bit more subconsciously than it is actively. The more the INFJ learns to trust their intuitive abilities, the more self-aware and capable they will become.

The auxiliary function of the INFJ is their Fe (Extraverted feeling), which helps them to connect with and understand others around them. INFJs are sensitive to the emotions and needs of people, and care deeply about helping them. INFJs can often empathize rather easily, and can naturally sense of the emotions of those close to them. This can be a rather powerful ability for the INFJ, but it can also be something which they struggle with. Because of this the INFJ cares about making a difference and can often neglect their own personal needs in order to help the people closest to them. They may neglect their own needs for so long that they do end up under extreme stress, forcing them into this shadow mode which make the INFJ unlike their usual selves.

The tertiary function for the INFJ is their introverted thinking (Ti) which helps them to process facts and information. This is the analytical side of the INFJ, which makes them interesting in learning about different things. They often enjoy reading and researching for long periods of time, diving into mountains of information. While INFJs are caring people who are often focused on the emotions of others, they also enjoy sciences and complex ideas more than most people realize. Their Ti helps them to absorb this information with a sense of wonder and excitement.

Se is the inferior function of the INFJ, and really isn’t used as strongly as their other functions. For them it can be rather weak most of the time, since INFJs don’t spend much energy focused on the outside world. At the same time this does help the INFJ pick up on details, ones which process further through their Ni. They can be connected to the world around them, and are even drawn to things which are more physically beautiful in appearance. While they might not hold high value to this, it is part of what makes the INFJ appreciate art and even the beauty of those they see.

What Happens in Their Shadow

In their shadow the INFJs Ni no longer becomes their focus, instead they turn to Ne, which is normally not something they know or understand that well. The INFJ begins to try and confirm their intuitive knowledge by making outside connections, using Ne which is weak and becomes more messy and confusing in this situation. The INFJ may do this because their beliefs and intuition is being challenged by someone, threatening that they don’t actually know what they are talking about. Since naturally the INFJ does not have a stream of thought to really show people where they gather this information, they might attempt to use this Ne to do so. They try to make connections and find outside patterns, grasping at ideas in hopes of piecing it together in a way which makes sense. Instead of trusting in their own knowledge and confidence, the INFJ begins attempting to prove themselves using extraverted intuition instead. Once the INFJ does this they can become overwhelmed with the many possibilities and options around them, beginning to doubt their own intuitive abilities and knowledge. This can lead the INFJ to feeling more stressed than before, causing the shadow to disrupt their normal state of being.

For the INFJ their second function of Fe, turns more to the introverted feeling or Fi. When personality types use Fi naturally, it helps them to understand their own voice and their own inner feelings or beliefs. It makes them morally sound and confident people, who rely on what they internally know to be right. For the INFJ this doesn’t become a confidence builder, instead it becomes an inner doubting voice which causes them more stress. They find themselves having doubts, constantly criticising themselves and ultimately believing in these negative thoughts. It can cause the INFJ to self-flagellate, taking on blame for things they should not feel a sense of guilt for. Instead this function becomes judgemental towards themselves, and even lashes out at those around them. It will begin to judge people for their mistakes, rather than see them for something more sincere and innocent.

For the INFJ naturally Ti is their third functions, but in their shadow it becomes Te weary. When the INFJ is in their shadow they can become rather defensive, especially around people who use extraverted thinking dominantly. They often see these people as a threat, wanting to challenge them or control the INFJ in some way. THis makes them more likely to push these people away, or demonize them as something awful and untrustworthy. This can make the INFJ rather defensive, trying to use their own Te logic but possessing many holes in the way they do this.

For the INFJ their Si function becomes something which focuses on the negative things of the past. They analyze these past memories and only see the trauma or pain which was caused from it. Instead of seeing the positive things, or the lessons learned they seem only focused on what they had to endure during those times. This can also cause the INFJ to distort the past in some ways, their mind grasping at the negative occurrences so much that it is incapable of seeing the big picture.

The reason the INFJ will go into their darker shadow mode, is because they are under extreme stress or trauma. Under times where the INFJ has experienced and overwhelming amount of stress, they find themselves doubting themselves entirely. They no longer trust in their natural strengths and instead find themselves searching for other means of problem solving. Because of this the INFJ really does find themselves overwhelmed and trying to find solutions for this high stress they are experiencing.

When the INFJ undergoes serious trauma they are likely to slip into their shadow. This can be something they find difficult to escape, since they have lost the ability to rely on their natural functions. For most this is something which can happen in short periods of time, as they find themselves righting once again when the stress dies down and the situation becomes less overwhelmed. Escaping whatever is putting them into this stressful state can be important for the INFJ, especially if it is only causing them to feel drained.