Do You Heed the Warnings of Others, Based on Your Personality Type 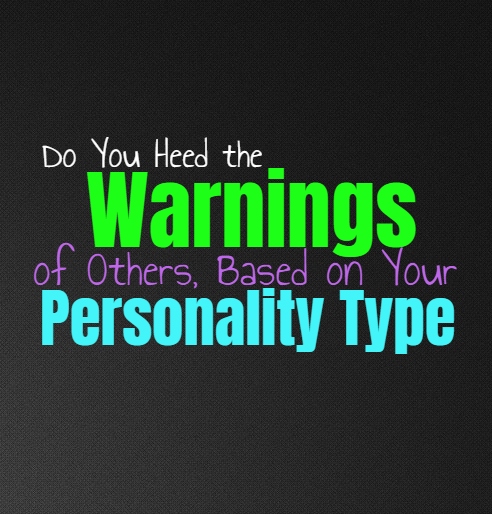 Do You Heed the Warnings of Others, Based on Your Personality Type

Some people are naturally more inclined to heed warnings and pay attention to the information they are give. Others find it difficult to really listen and might rebel simply because they have it inside of them to go against what people expect or command of them. Here is how likely you are to heed the warnings of others, based on your personality type.

INFJs will often listen to what people have to say, especially when it is someone they know and trust. When the INFJ cares for someone they are certainly going to heed their warnings and take into account what they are saying. INFJs are independent people who believe in using what they know to analyze and figure out what choices are the right ones. While they don’t just listen to what any random person says, that doesn’t mean they will not heed the warnings of the people they deeply trust and care for.

ENFJs are intuitive people, but they also care to listen to their loved ones when they should. They will do what they can to pay attention to these warnings and don’t want to ignore something which might be useful to them. When the ENFJ does trust someone they likely heed their warnings, and try to analyze the situation and figure out if this information is true. They might not simply buy into anything without doing their research, but ENFJs do listen and pay attention when someone is warning them.

INFPs can be somewhat stubborn people and so they don’t always heed the warnings of others. They follow their own hearts and their own inner compass, which guides them to make the choices that feel right and good. INFPs are more likely to heed the warnings of their loved ones and the people they deeply trust. While they do their best to listen, INFPs do become distracted and want to go after the things which feel right in their hearts. Even if someone is warning them against their actions, INFPs struggle to ignore what they desire.

ENFPs are often very independent people, and so sometimes they struggle to really listen. When someone is trying to warn the ENFP about something they should not do, it can be difficult for them to listen to anything other than their own hearts. They want to go after what their own instincts tell them is right and good, and so listening to others can be a difficult thing for the ENFP. When they trust someone they do want to hear what they are saying, but in the end they often feel like they need to make their own choices.

INTJs are strong-willed people and so sometimes it can be difficult for them to really listen to most others. If a warning comes from someone they trust and believe to be logical, then they are much more likely to listen. INTJs don’t blindly follow what they hear though, and instead will want to use this information and do their own research. This will often be how the INTJ makes a decision about whether or not they trust these warnings, but they are not incapable of listening to them and taking this information into consideration.

ENTJs are logical people, but they can also be a bit stubborn with their actions. They don’t simply listen to someone because they present them with some sort of warning. ENTJs will likely only heed the warnings of the people they trust and respect. If they believe someone to be logical and intelligent then the ENTJ is definitely like to listen to the information they provide them with. They will use this information and analyze it in order to make the right choice for their future.

INTPs are often very factual people who believe in analyzing their information before moving forward with it. They don’t simply listen to every warning they receive though, especially if it comes from someone they do not trust. INTPs believe in using logic and reason in order to figure out the truth of a situation, rather than allowing emotions to stand in the way of making the right choice. They are willing to listen to the warnings of people they truly trust, but other than that they aren’t likely to just follow blindly.

ENTPs can be a bit headstrong, but that doesn’t mean they won’t take in new information as it comes to them. They believe in exploring their options and really paying attention to the different potential outcomes. ENTPs are often focused on possibilities and so they are willing to heed someone’s warning long enough to analyze the information and uncover whether it is false or not. If this comes from someone they don’t trust to be reliable though, the ENTP is likely to ignore this and not waste their time on it.

ISTJs are often cautious people and so they are willing to heed people’s warnings when they trust them. ISTJs however, don’t just believe in listening to the words of every fool they come across. For them it is about listening to those who they trust, and the people who actually use logic and facts to share information. ISTJs will often analyze and research everything they do, not wanting to step into a new situation without being sure of their choices.

ESTJs are a bit headstrong at times and don’t often listen to others, unless it is someone they deeply trust and believe in. For the ESTJ it is best to listen to their own minds and morals, wanting to do what they believe is the smartest choice. They don’t like making mistakes and so every action is something they want to analyze and be completely certain of before moving forward. They will heed the warnings of those they trust, and often ignore whatever comes from those they don’t.

ISFJs often listen to others and heed their warnings, since they want to be sure they are making wise choices. They don’t just want to jump into something without being sure of it, especially if it puts their loved ones at risk in some way. For the ISFJ it is often wise to heed the warnings of others, at least to some extent. These warnings might not halt the ISFJ, but it will be something they want to listen to and really be certain of before moving forward.

ISTPs don’t really heed the warnings of most people, since they can be rather stubborn. They focus on gathering their own information and don’t easily trust or rely on others. For the ISTP it is more about who is presenting them with a warning and what the intentions are. If this is coming from someone they trust and consider to be intelligent, then they will do their best to listen and use this information.

ESTPs don’t simply listen to anyone they meet, and can be somewhat headstrong people. They are independent and want to feel free to make their own choices regardless of what others expect of them. ESTPs will likely heed the warnings of people they trust and rely on, but even then they can be doubtful. They follow their own beliefs and informations, and go after whatever they feel excited and inspired by.

ISFPs care about listening to the ones they love, but they are naturally independent people. It can be challenging for them to heed the warnings of others, since they want to follow their own hearts. They can be a bit headstrong, especially when they are going after something they desire and believe in. ISFPs do what feels right for them, and so sometimes they struggle to really listen to the warnings of others.

ESFPs believe in listening to their own hearts and so sometimes they struggle to really heed the warnings of others. When the ESFP trusts someone deeply, then they are more likely to listen to their warnings. ESFPs don’t have many people they rely on in this way, but once they trust someone they will certainly heed their warnings and listen to their advice. They do their best to follow their hearts, and so because of this they can be a bit headstrong with their choices.