Here’s How Often You Have Contingency Plans, Based on Your Personality Type 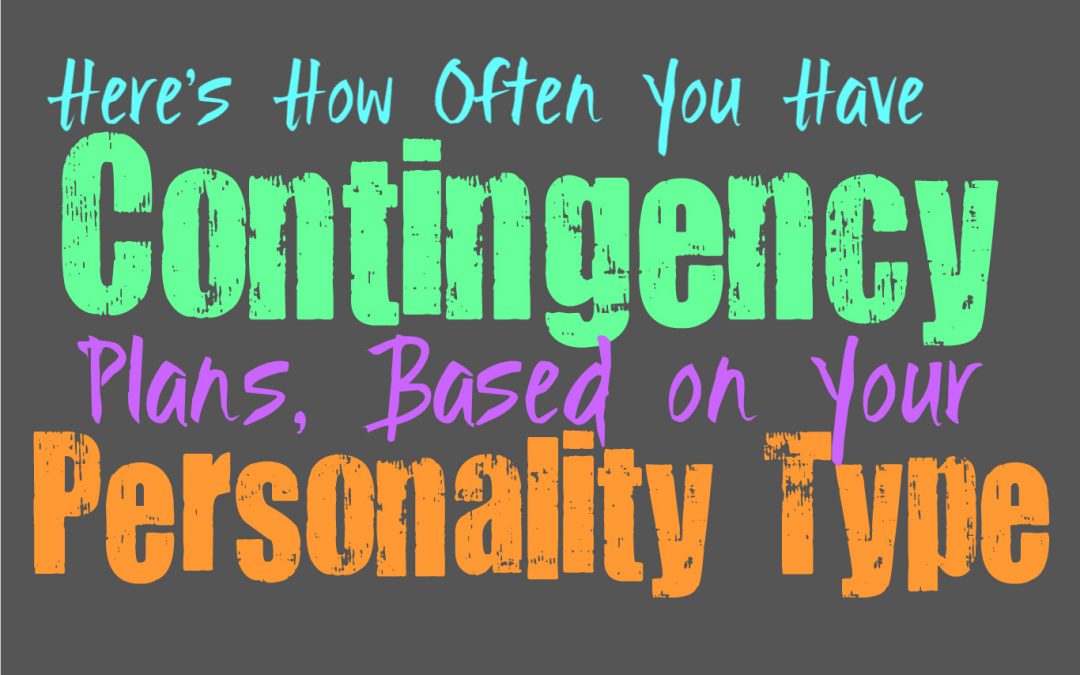 Here’s How Often You Have Contingency Plans, Based on Your Personality Type

For some people having a backup plan or some sort of contingency strategy, is completely necessary. For others it is actually more stressful to constantly strive for backup plans, and defeats the purpose of going after what they want. Here is how likely you are to possess multiple backup plans, based on your personality type.

INFJs follow their intuition when it comes to their decisions and the path they chose to take. Their intuitive abilities often help them decipher which direction makes the most sense, and that alone is often their plan. While INFJs might not have backup plans that they constantly put together, they are capable of allowing their intuition to guide them when things go wrong. They do like being prepared for things, and can become uneasy with too many unknown factors. While INFJs enjoy being able to feel ready for what comes next, they often their intuition rather than constant contingency plans.

ENFJs do like being prepared for things, but that doesn’t always mean having contingency plans. They prefer to allow their intuition to guide them, instead of having handfuls of backup plans. ENFJs work hard to keep everything organized and juggled so that they can take care of things properly. For the ENFJ their backup plans often lie within their ability to intuitively grasp the next best move. They often don’t spend time deciphering these backup plans beforehand, and simply use their intuition to guide them through any hiccups.

INFPs aren’t really ones for contingency plans, since they are more focused on adapting to their surroundings. They don’t like having to plan ahead all that much, instead they allow their intuition to be their guide. Their intuitive abilities do help them naturally come up with many different possible outcomes, but they don’t often plan ahead. INFPs will be able to think on their feet and use their problem solving abilities to come up with a secondary plan when the time comes. They don’t need to obsess over what might happen in order to navigate the situation.

ENFPs aren’t really ones for coming up with backup plans before taking on something new. They would rather dive in and learn from the experience, taking it as it comes at them. ENFPs are great at thinking on their feet, which helps them problem solve when something does not go as expected. They don’t often spend time beforehand concocting these contingency plans, the ENFP is simply capable of adapting when things change. They aren’t afraid of having to problem solve last minute, and are often very good at doing this.

INTJs do enjoy having contingency plans, simply because it makes logical sense to do so. They use their intuitive abilities to come up with intelligent backup plans for each task. INTJs like being as prepared as possible, which is part of why they research everything so thoroughly. They dislike feeling unprepared for things and in order to truly feel comfortable with their choices, the INTJ believes in coming up with well thought out contingency strategies before making their next movie. While INTJs can certainly navigate problems that arise suddenly, they prefer to be as informed and prepared as possible.

ENTJs definitely believe in coming up with plenty of contingency plans before moving forward with a task or project. They don’t like leaving things up to chance, instead they want to be prepared for anything. While ENTJs do want to get things right the first time, part of this is being able to predict potential mistakes. They value efficiency and in order to be truly effective in their tasks the ENTJs believes in prior planning, which does require a few backup plans ahead of time.

INTPs do believe in contingency plans to some extent, but they often use their intuition to come up with them. They are naturally aware of so many different possible outcomes, which can cause the INTP to feel a bit nervous about things sometimes. They know that even the best laid plans can have mistakes, and that things don’t always go as planned. INTPs prefer to dive into all of these possible changes, in order to really come up with a plan that is both effective and adaptable.

ENTPs don’t like obsessing over backup plans and are often capable of adapting when things don’t go as expected. They are always running through different possible outcomes in their minds, which helps them intuitively grasp ways to problem solve when things do go wrong. ENTPs enjoy these challenges most of the time, and like being able to push themselves to come up with solutions to whatever problems arise. They don’t need to have constant contingency plans in order to accomplish their goals, they are more than capable of problem solving and adapting.

ISTJs definitely believe in having backup plans before taking anything on. They don’t like failure at all, so they want to always be as prepared as possible. ISTJs will often do tiresome research before taking on a new challenge or project, simply because they want to get things right the first time. They also believe in having plenty of contingency plans to ensure that they can handle whatever challenges might arise during their tasks.

ESTJs do believe in contingency plans, since they believe in being as efficient as possible. In order to truly be efficient and get things done properly, they need to do plenty of research and be sure they are prepared for what might happen. ESTJs believe in backup plans simply as a logical and practical move in ensuring that they can handle their task at hand. Instead of simply living in the moment, the ESTJ wants to come up with effective backup plans so that they can ensure things go smoothly.

ISFJs do believe in having backup plans, mostly because they don’t like failure. They want to be sure that they take care of everything properly, and would rather be fully prepared for things. ISFJs dislike simply taking things on in the moment and would much rather be aware of what is to come. They aren’t interested in having to adapt to something in the present, they want to research and prepare themselves with plenty of backup plans.

ESFJs do prefer having backup plans but they don’t always have the time for it. They are so focused on taking care of their loved ones and this often affects any plans they do make. ESFJs can become caught up in what someone else wants in that moment, which makes it challenging to always stick to their stricter plans. ESFJs do prefer to have backup plans though, since they want to be prepared for what might go wrong. To them being able to handle anything that comes their way is an important part of being able to take care of others.

ISTPs don’t really need to have too many contingency plans since they enjoy adapting in the moment. Their minds are naturally great at problem solving, which helps them overcome any changes. ISTPs do live very much in the present moment, and this is why they often see little reason for too many back up plans. They would rather find ways to overcome whatever happens as it comes at them instead of stressing to prepare.

ESTPs don’t often have many backup plans, since they live so much in the present moment. Instead of focusing on coming up with a handful of contingency plans, the ESTP would often rather adapt to whatever comes their way. They are very capable of problem solving and prefer to enjoy living in the present. For the ESTP being able to overcome changes is important, and is something they would rather do in the moment.

ISFPs rarely have backup plans, instead they prefer to allow life to come at them. They live in the present and don’t feel a strong need to constantly prepare. Having to put together too many contingency plans is actually more stressful for the ISFP than being unprepared. They don’t like having to come up with strict guidelines, they prefer to soak up the present.

ESFPs really aren’t ones for coming up with too many backup plans, instead they adapt to the moment. ESFPs are capable of handling any changes that might come their way and might even enjoy the challenge. They become frustrated with people who require constant planning and preparation, and often even stifled by this. For ESFPs it is more valuable to enjoy living in the moment, and to simply adapt to anything that might go wrong.