Here’s How Important Reputation is to You, Based on Your Personality Type 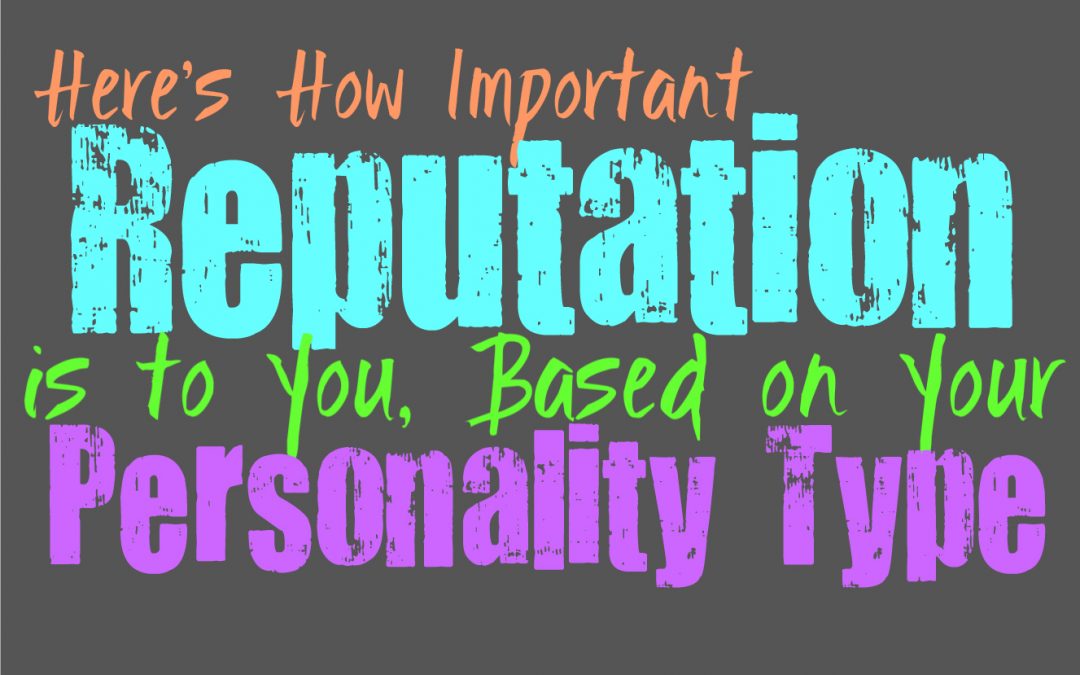 Here’s How Important Reputation is to You, Based on Your Personality Type

While reputation doesn’t matter to some people, to others it is vital. Some enjoy being able to feel proud of how others see them, and work hard to be a valuable member of their community. Here is how important your reputation is to you, based on your personality type.

INFJs don’t often care much for building a reputation, since they are focused on more valuable things. Trying to impress people isn’t something the INFJ really enjoys, since it often feels a bit shallow. They want to find meaning in their actions and in the world around them. The INFJ does care how their loved ones see them though, and this causes them to want to find people who accept them for who they are. For INFJs reputation is rarely something that seems important or meaningful, and might feel a bit exhausting to keep up with.

While ENFJs prefer to focus on things that are meaningful, to them having the right reputation can still feel important. How others see the ENFJ is actually important to them, especially when it comes to the ones they care about most. They want to have a reputation that represents who they are, and how much they care for others. ENFJs are always doing things for their loved ones, and work hard to make a difference in the world around then.

INFPs rarely care much about their reputation, although it can become upsetting when people constantly misunderstand them. For the INFP caring too much about reputation can feel shallow and meaningless. They desire to do the right thing no matter what, and follow their heart down the right path. INFPs are more focused on doing what they know is sincere and honest, and are always searching for meaning in the world around them. Things that are shallow or focused on making people like them, feels a bit fake to them.

ENFPs can sometimes be focused on reputation when they are younger, and they will have a hard time overcoming this. They might want to make people like them, so they want to be sure that they have the right reputation to represent them. They dislike feeling as if someone dislikes or misunderstands them, and will work hard to change this. As the ENFP gets older they often move away from this desire to have a great reputation, and would rather focus on being themselves without feeling held back.

INTJs do care about reputation to some extent, since they realize this can affect their lives. INTJs want to make sure that they have the right responses from those around them, so that they aren’t held back in any way. They often have serious goals and to them it is important to achieve them in the best way possible. For the INTJ reputation isn’t valuable because they desire to be liked by others, but only because they want to be sure that nothing stands in their way of moving forward,

ENTJs are driven and goal-oriented people, and because of this reputation does become a bit important to them. They want to be sure that their reputation doesn’t stand in the way of them being able to achieve the things they want in life. For the ENTJ it is important to be sure that people perceive them the right way, so that their image does not cause them trouble. They don’t really care about being liked, so their goal of having the right reputation is more about practical things.

INTPs don’t usually focus on building a reputation, but at the same time they understand the value in it. For them it is often better to fly under the radar, rather than to focus on getting positive attention. INTPs don’t like having to focus on having the right reputation, and might find it to be a bit draining. They realize it can be valuable to have a positive rep, but they don’t like having to expend the energy to create this. They would rather focus on their own inner worlds, and enjoy exploring their minds rather than trying to make others like them.

ENTPs don’t really care much about creating the right reputation, since having to focus on things seems a bit exhausting. ENTPs would rather focus on being sincere and exploring the world around them, and simply let the rest happen itself. If people dislike them then the ENTP is more than capable of using their charm to change their minds, but they don’t always feel like this is important. ENTPs would rather focus on their own inner minds and enjoy being able to feel free to explore in their own way.

ISTJs do believe that reputation is important, and so they work hard to maintain theirs. While the ISTJ might not be interested in being liked by everyone, they do want to be perceived the right way. They want to be sure that people are aware of their strong work ethic, their sense of morals, and their drive to push forward. ISTJs believe it is important that others understand what matters to them, so they try hard to be represented appropriately.

For the ESTJ reputation is actually very important, since they want to be a valued member of their community. They don’t need to be liked by everyone, but respect is very important to ESTJs. For the ESTJ having the right reputation is valuable, especially since they want to move forward and achieve their goals. They don’t like being held back and they realize that having the wrong reputation spread around can definitely hinder their ability to progress in life.

ISFJs do believe that their reputation is important, and they desire to be liked by others. They want their loved ones to view them in a positive light, and because of this having the right reputation is important. ISFJs don’t want people to misunderstand who they are and what their intentions truly are. They become bothered if it seems like people don’t truly see who they are, since ISFJs care deeply for the people around them.

For ESFJs having a positive reputation is mostly valuable for the sake of their loved ones. They don’t like when people spread misinformation which might harm or hold back their ability to care for the people they care about. ESFJs often care most about their loved ones and how they perceive them, and don’t always care about how strangers see them. At the same time they realize that the right reputation is often important in order for them to achieve their goals in life.

ISTPs don’t really care much for having the right reputation, since they are more focused on their own inner thoughts. Having to work on maintaining a rep can be a bit exhausting for ISTPs. They are naturally charming people, but they prefer to keep things about themselves a mystery. The reputation of the ISTP is often hard to peg down, since they are good at creating this sense of mysteriousness. They aren’t fans of sharing themselves with others, and do better being independent.

ESTPs don’t care too much about their reputation, since they dislike feeling restrained by it. ESTPs believe in working hard to accomplish their goals, but they don’t believe it is that important to obsess over their reputation. While they don’t really care about creating a reputation that seems admirable, ESTPs would rather have more of a mysterious representation of themselves.

ISFPs don’t often see value in having the right reputation, and often prefer to be a bit of a mystery to most. They care about how their loved ones view them, but having to create a reputation they can be proud of becomes truly exhausting for the ISFP. They would much rather focus on doing the right thing, and believe in following their hearts down the right path.

ESFPs do care about how others see them, and desire to be liked by others. They don’t like the idea of people misunderstanding them or seeing them the wrong way, instead they want people to recognize who they truly are. ESFPs are caring people who enjoy soaking up the present moment, and they want this to be recognizable by others. They care about how people see them, but this is simply because ESFPs have a hard time understanding why others might dislike them.