INFJ Writers: How the INFJ Can Overcome Writer’s Block 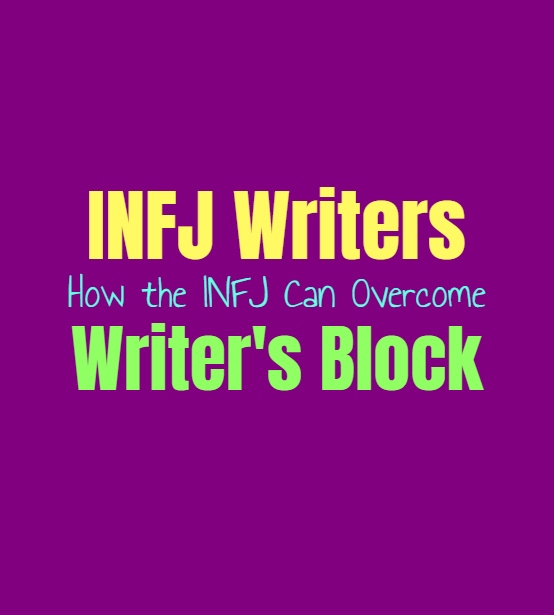 INFJ Writers: How the INFJ Can Overcome Writer’s Block

For some people writing is almost as natural as breathing. Their words are important to them and being able to string them together in just the right ways, helps them to truly express their inner selves and emotions. Writing can be a powerful tool to help us share who we are, but also to convey a message that might be challenging to speak out loud. Writing also can help people connect to one another, and find unique ways of venting out those inner feelings and even learning how to understand them better than we did before. For some people writing is deeply important to who they are and how they share themselves, while for others it doesn’t share this same value.

INFJs are often known to be writers, since they have a natural affinity for writing and literature. For the INFJ sitting down with a good book is often very rewarding, and because of this they are drawn to writing themselves. There are so many reasons why the INFJ seems to be so intrigued by writing, and partly it is because it helps them express things without having to actually interact face to face. Whether this be writing emails, letters, or writing out a poem or story- the INFJ often treasures this ability to truly feel expressive and have the time to do so without feeling watched or rushed.

INFJs often enjoy writing as a means of truly being able to express their thoughts and feelings clearly. While INFJs might also have a natural charm and ability to converse with people, that doesn’t mean they are truly expressing what is going on inside. When they need to sift through their inner thoughts and feelings, sitting alone and just writing them down can be truly useful for the INFJ. There are times when they bottle things up in hopes of avoiding hurting someone, or feeling too vulnerable. Since the INFJ has a tendency to keep things inside, being able to write it down can be something which is almost therapeutic for them.  Taking the time without interruptions or pressure from the world around them, can be the absolute best way for the INFJ to express what is really going on inside of them. They might not always plan to share these words with someone, but just seeing them written out can really help them process what they are thinking and feeling. It can be hard for the INFJ to really allow themselves the chance to be vulnerable, but that doesn’t mean they can’t take the first step by working through these emotions on their own. If they do hit a point where they really want to share their feelings with someone, writing it down really can be helpful as well. This gives them the chance to put it all down and be sure it is being expressed how they want, instead of simply feeling obligated to speak the words and fear that they might not come out right.

INFJs also enjoy writing as a creative experience, and often have many stories already inside of their minds. For the INFJ writing is often something which makes them feel a sense of pride and expression about the many ideas and thoughts inside of their minds. Being able to create and mold these stories and different worlds is often very rewarding for them. They often have a natural way with words and their creative and intelligent inner minds can really help the INFJ excel as writers. They don’t mind spending hours alone just jotting down all of the thoughts they have, which makes it natural for them to lock themselves away with their writing. This is something which often makes writing an even more intriguing thing for the introverted INFJ. They enjoy this time to themselves and don’t constantly need to be interacting with other people in order to feel energized and happy.

Perfectionism can be the greatest downfall and cause for writers block with the INFJ. They find themselves constantly going over every word and often feel like they could be better. They compare themselves to others, and can see so many flaws in their own actions and writing. This causes the INFJ to feel fearful of sharing their work with anyone, never truly feeling good enough. Even the INFJ who loves to write and come up with detailed stories, often feels like they aren’t truly a writer. They put a lot of pressure on themselves, and never really feel like they are good enough. This natural perfectionism is something which causes the INFJ to feel blocked sometimes with their writing. They don’t feel like they are spending time doing something which is worthwhile, and struggle to really believe in themselves. When this happens the INFJ really needs to take a step back and stop comparing themselves to everyone else. Each writer has their own unique process, and their own style. Just because the INFJ admires the writing style of another person, does not make their own work any less valuable. They need to take some time to themselves and stop focusing on what everyone else is doing. It can also be helpful to have a support system, a person who believes in the INFJ and can give them some useful perspective. When they are so caught up in their own head that they stop believing in themselves, this loved one can help the INFJ see the truth. They often need this type of person close to them, especially when they are being so hard on themselves that they cannot see things clearly.

Writing can become so much more than just a hobby for the INFJ, especially if they learn to trust in themselves and their own abilities. It can be a challenging and sometimes exhausting process, but it is that way for every writer. Once they stop comparing themselves to writers around them and simply start focusing on their own strengths, the INFJ can start to push past those fears and doubts and overcome the writer’s block which tends to grab hold of them.