Here’s How Often You Follow Your Heart, Based On Your Personality Type 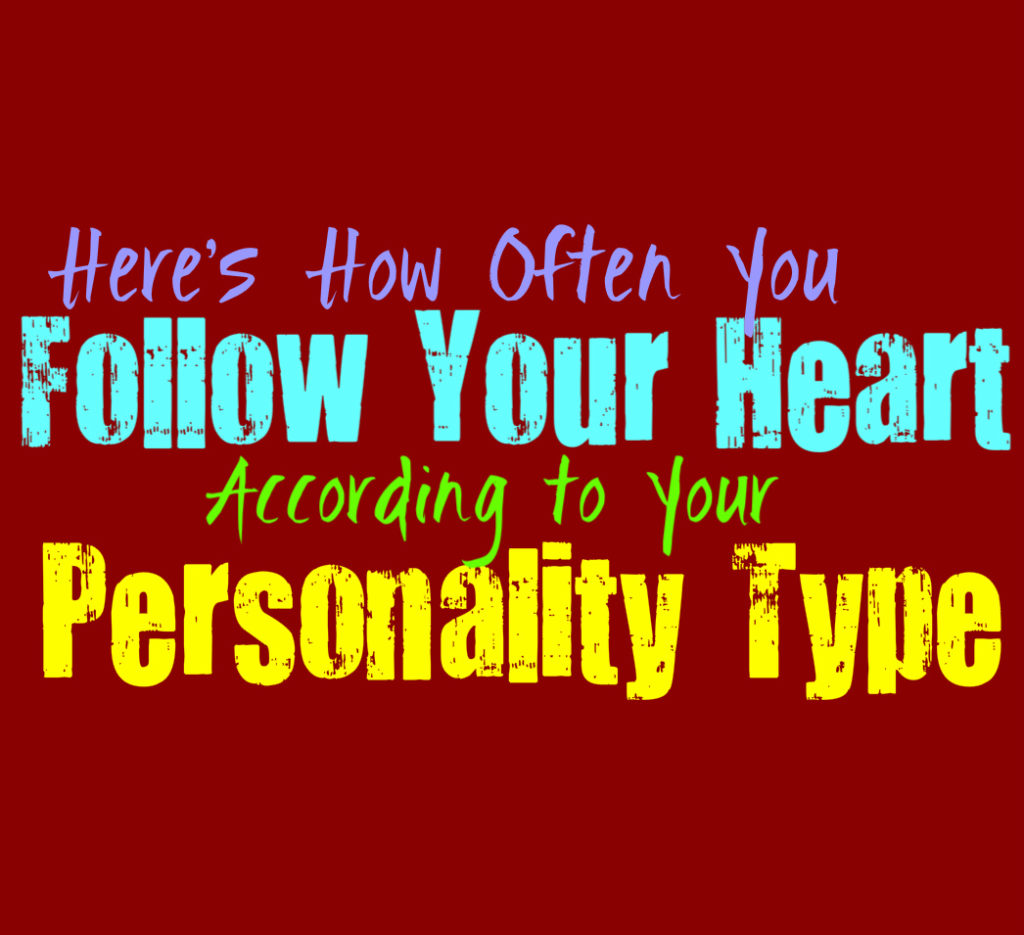 Here’s How Often You Follow Your Heart, Based On Your Personality Type

While some people follow their head to make choices, others believe in following their hearts. Here is how often you follow your heart, based on your personality type.

INFJs are a combination of heart and head, which is a rather intriguing part of their personality. While some people are either all head, or all heart, INFJs can be a large amount of both. Ultimately though, INFJs believe in caring about others above everything and are always striving to do the right thing. While INFJs will follow their heart when it comes to certain things in life, they also believe in letting their intuition be their guide. This is more connected to logic than people realize, and comes from them subconsciously collecting information.

ENFJs definitely believe in following their hearts, especially when it comes to attending to the needs of their loved ones. ENFJs do use logic and reason to figure out the best course of action, but will ultimately prioritize the emotional needs of others. ENFJs are moral people who believe in doing what is right, no matter what that means. They do follow their heart when it comes to their moral and what they believe is right, and will value that above everything else.

INFPs are moral and sincere people, who definitely believe in following their hearts. They are capable of logic and enjoy researching and learning more about different topics, but those things don’t come above their morals. When it comes to making choices INFPs are almost always going to prioritize feelings and beliefs, and will definitely follow what their heart tells them to do. INFPs follow their heart for most of their choices, and let it be their guide. This can make things a bit messy, but it is truly the right path for them.

ENFPs definitely believe in following their hearts, and focus more on making decisions based on what they believe is right. They have rather strong inner morals, which dictate most of their choices in life. ENFPs are intelligent people who enjoy researching and understanding information, but they won’t let that rule their decision making. While they will weigh things out logically, ENFPs ultimately have to follow their hearts and their intuition when it comes to following a certain path in life.

INTJs are more logical people than they are emotional, and prefer to follow their heads. Their minds are their greatest asset, and INTJs are certainly not inclined to let that go to waste. They are not likely to follow their hearts, and do not rely on their emotions in order to make decisions in life. There are times when an INTJ will pass up a chance at romance, if that person does not make logical sense as a companion. They do have rather deep emotions, they just don’t want to let those feelings rule their choice sin life.

ENTJs are not emotionally driven people, and prefer to follow logic and reason. They lead with their minds and not their hearts, especially when it comes to major life decisions. ENTJs rely on their minds and their ability to come up with strategic plans, as well as their intuition. They prefer to rely on facts, and believe that emotions are unreliable. ENTJs do feel things very deeply, they just don’t believe in follow their heart when it comes to making important life decisions.

INTPs are logical and analytical people, who prefer to follow facts. They are always processing information they gather and working it through their inner minds and their own intuition. INTPs are excellent at coming up with conclusions, and often great strategic planners. While INTPs do feel things very deeply, they prefer to follow their minds and intuition in order to make important decisions. Most of the time the INTP will follow their head, but there are occasions where their hearts can take control. This is usually when the INTP has neglected their emotions for so long, that it seems those feelings won’t be ignored any longer.

ENTPs are definitely logical people, who enjoy being able to soak up the different possibilities around them. While ENTPs do believe in doing what is logical and reasonable, they also have an adventurous side to them. There are times when the ENTP wants to experience new things, and will certainly follow their heart more than their heads. They are fully aware that the smartest path would be to logically assess a situation, but ENTPs don’t mind getting a little messy in order to experience life to the fullest. They want to be able to learn from their mistakes, which is why they need to allow themselves to make a few.

ISTJs are much more interested in following reason and prefer to be practical people. They are not the type to follow their emotions, and value logic much more. ISTJs are moral people, who do believe in doing what is right, at the same time this comes from a logical assessment of their values. ISTJs are not often seen as the type of people to follow their hearts, since they likely feel that emotions are unpredictable. Instead of following their feelings, they are more inclined to value practicality.

ESTJs are definitely more interested in doing what is practical, than going by their emotions. ESTJs are not very interested in making emotional choices, and feel like people who do this are foolish. They are not the type of people to follow their heart, and are much more inclined to follow their heads. They are logical people, who value pragmatic behavior and want to be efficient in their choices.

ISFJs care very much about their loved ones and strive to make them happy. While the ISFJ is motivated by the needs of others, they are also very practical people. This causes them to search for the most practical solution in order to solve problems and make others happy. ISFJs are inclined to follow this as a way to get things done and make choices, but they do follow their own hearts sometimes. They believe in doing what is right, and sometimes emotions do dominate their choices.

ESFJs are definitely more ruled by their heart than their head, and believe in doing what is right. They care deeply for their loved ones and truly just want to do what is best for them. While ESFJs are practical people, they are much more focused on the emotions of those closest to them. They are more inclined to follow their hearts than their heads, and simply want to make everyone as happy as possible.

ISTPs are more ruled by logic than they are anything else, and believe in following the facts. ISTPs do not let emotions control them, and realize that they cannot rely on feelings to make decisions. ISTPs are analytical people and they use this problem solving ability to make most of their choices in life. They are very internal and laid back people, but they are certainly not the type to follow their hearts.

ESTPs are definitely logical people who enjoy being able to observe the facts before making a decision. While ESTPs are mainly focused on logic and practicality, they do have times where they let their heart lead them. They live in the present moment, and this can sometimes steer them towards following their emotions more than following logic or reason. ESTPs prefer to be factual people, but they can be a bit caught up in the moment sometimes.

ISFPs definitely believe in following their hearts, and let those feelings be their guide. They are certainly capable of logic and reason, they just prefer to let their hearts lead them. ISFPs are more interested in doing what feels right for them, since they are very moral people. They have strong inner morals and intense emotions, which are what lead the ISFP down their own path.

ESFPs are often caught up in the present moment and believe in following their hearts. They strive to do what feels right for them and don’t enjoy people bringing them down with too much information. ESFPs just don’t want to be trapped by what others believe, and simply want to do what makes them happy. They have big hearts and believe in letting those hearts be their guide in life. ESFPs make choices based on what they feel is right, not what other people tell them to do.