Do You Enjoy Making Plans, According to Your Personality Type 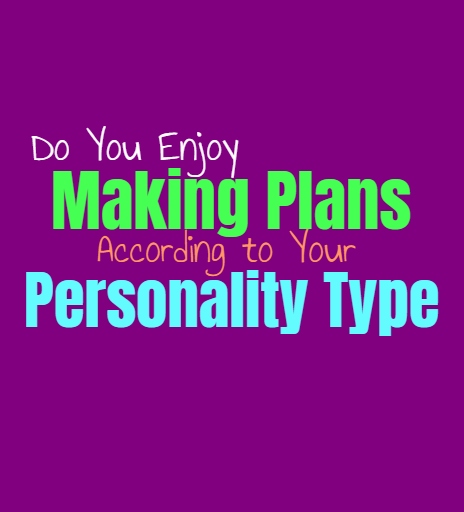 Do You Enjoy Making Plans, According to Your Personality Type

Some people naturally enjoy planning things out, but when it comes to making social plans or setting dates it can be a different story. This can be too much pressure for some people, while for others it is simply restricting. Here is how you feel about making plans, based on your personality type.

While INFJs are seen as planners who enjoy scheduling things and being sure of their future, making social plans can be a totally different situation for them. They don’t necessarily enjoy making these plans, since it can feel stressful for them. Setting up some sort of date and time for something, makes them feel like they are jumping into it and committing to something when they need more time to be sure. INFJs don’t like making mistakes and so before they can actually make plans, they often spend a lot of time thinking it through in order to figure out what they actually want to do.

ENFJs are naturally planners and so they do enjoy making plans with people. Even when it comes to social plans, ENFJs often enjoy putting these things together. They want to be able to keep things organized in hopes of ensuring that the outing is enjoyable for everyone involved. Sometimes setting certain plans in stone can be a bit stressful for the ENFJ, simply because it can be a lot of pressure to ensure they are doing things the right way. They care about making the right plans so that they don’t negatively affect their lives or the lives of the ones they love. INFP

INFPs are not naturally planners, and so having to schedule things and make plans can be stressful. They often prefer to participate in things in a more spontaneous manner, feeling free to enjoy things without some sort of concrete plan. For the INFP having to adhere to social plans is really unnerving, since sometimes they just aren’t feeling up to interacting. They want to be able to have fun with friends when they are energized and know it won’t drag them down if they are already in need of alone time.

ENFPs are not planners by nature, instead they enjoy going with the flow of things. They can be a bit more spontaneous with how they do things, and don’t like being restricted. When they have to make concrete plans it can leave the ENFP feeling stressed out, since they might want to change their minds at the last minute. They don’t like feeling as if they are required to make and follow through with the plans, especially when they know they are likely to feel less inspires when the day actually arrives. Sometimes simply know that they have these plans can be annoying for the ENFP, and they might complain when someone else made the plans for them.

INTJs do prefer to make plans and often enjoy being able to schedule things how they please. When it comes to making social plans it can be a bit unnerving sometimes, but they do prefer to keep things more securely planned out in this way. INTJs prefer to prepare themselves for a situation, rather than simply having to live in the moment and go with the flow. They will prefer to make plans so that they know what is to come. Even though sometimes social plans can be a little draining for them, they would rather know it is coming than have someone spring it on them last minute.

ENTJs often enjoy making plans, especially when it comes to scheduling events with their friends and loved ones. They enjoy being able to prepare for these things, and so making plans and scheduling it is actually better for the ENTJ. They want to be able to get themselves ready for these situations, especially since they often have many things they need to get done beforehand. For the ENTJ not making plans and just going with the flow can be extremely stressful and leaves them feeling unsure.

INTPs aren’t really planners, since they can sometimes struggle to make these plans and follow through with them. They become distracted sometimes and find themselves showing up a bit late because of this. They don’t really like making plans in which they feel like they must follow through with, and prefer more lax plans in these situations. INTPs simply have to much on their minds and they can easily find themselves distracted, or want to change their minds last minute.

For the ENTP making plans can feel a bit restrictive, but it does depend on the situation and the plans being made. For them it is more rewarding to live spontaneously, and seek out things which inspire them at the time. They might change their minds last minute and they don’t like feeling beholden to someone to follow through with these scheduled plans. ENTPs will do their best to make plans with people they love and care for, they just usually prefer when things aren’t so strict and scheduled.

ISTJs often enjoy making plans, since they don’t like things being too spontaneous. For them it is more rewarding to schedule things, so that they can properly prepare themselves. They want to be able to get others things finished beforehand, so that they don’t feel rushed or stressed in the moment. ISTJs have a lot of responsibilities which they take seriously, and so sometimes last minute plans can make it challenging for them to juggle these things. They do their best to appease their loved ones, but for the ISTJ making plans and keeping them is rewarding.

ESTJs definitely prefer to make plans rather than to do things unscheduled and spontaneous. They prefer these things since it is important for them to ensure that everything will go smoothly. When they have to do things last minute they won’t feel like they can properly prepare and get themselves ready. They are perfectionists who value efficiency, and so for the ESTJ making plans is far superior to just going with the flow of things. They don’t enjoy constantly feeling like things are unschedule and unplanned.

ISFJs definitely prefer to make plans and ensure that everything is properly scheduled and planned out. For them having things sprung on them last minute can be a bit overwhelming and even annoying. While ISFJs prefer to plan things out, this doesn’t mean they won’t do their best to adjust when a loved one needs something last minute. This just leaves them feeling very stressed out and so for the ISFJ making plans is far more comforting and rewarding.

ESFJs definitely prefer to make plans rather than do things last minute, but at the same time this can be a bit stressful. Having to make social plans or schedule certain things can be a little unnerving since they want to be sure they are making the right choices. ESFJs often worry about getting the plans just right, and so they don’t want to feel rushed into them. For the ESFJ it is better to be able to think through these plans thoroughly before actually making them concrete.

ISTPs don’t enjoy making plans most of the time, since they prefer to live in the moment. For them having strict plans can feel a bit stifling, since they might want to change their minds last minute. When it comes to socializing the ISTP wants to be able to do this how they please, instead of feeling forced to interact based on a schedule. They might have plans made and will want to change their minds or won’t feel up to it, and so for them this can be draining and even a bit stressful.

ESTPs don’t like having to make concrete plans most of the time, since they aren’t always great at keeping up with a schedule. They might make a general plan or idea of when they want to get together with someone, but they will rarely keep to a strict time. They often show up a little bit late, or even find themselves reschedule for hours later. ESTPs don’t mine loose plans, but anything concrete can feel both stressful and restrictive for them.

ISFPs aren’t really planners most of the time, and prefer when things are a bit more spontaneous. For the ISFP it is rewarding to be able to live in the moment and have people who are willing to spend time with them without having to schedule every second of it. ISFPs don’t mind making some plans, as long as the times aren’t strict and stressful for them. They aren’t always great at being on time and so they need people who are understanding about this and don’t become angry with the ISFP.

ESFPs don’t mind making plans as long as they are planning for something exciting. They often leave plenty of room to change their minds and be a bit more spontaneous though. For the ESFP making certain plans can be fun, especially if they are planning out something they truly want to do. They might need someone to help with certain details, since ESFP do enjoy being able to change their minds and feel free to to do.