Are You Someone Who Becomes Restless, Based on Your Personality Type 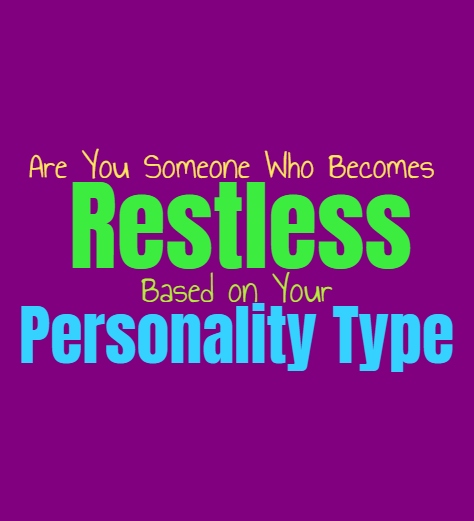 Are You Someone Who Becomes Restless, Based on Your Personality Type

We all can get a bit restless from time to time, but some find themselves in this state of mind far more than others. For some people sitting still or feeling stuck in the same place for too long, leaves them feeling restless rather easily and they feel the need to break away from this environment. Here is how often you feel restless, based on your personality type.

INFJs do sometimes become restless, especially if they feel like their daily lives are lacking in some sort of value and meaning. They want to be doing something with their lives which can truly make a difference, and leave their mark. For INFJs it can be draining to feel like they aren’t experiencing things they want, since they are passionate people in their souls. For INFJs being restless comes from a desire to live a more fulfilling life, one possessed with love and passion. They might not outwardly show that they are feeling restless, but this is something they experience internally.

ENFJs do sometimes become restless, but they like to keep themselves busy most of the time. They often have many things to take care of, and so all of these tasks and responsibilities keep them from feeling restless most of the time. ENFJs often want to be everything to everyone, and this can cause them to keep themselves busy trying to tend to the needs and happiness of those around them. ENFJs are passionate people though, and so if they feel like they aren’t going after the things which inspire them, they might start to feel a bit restless.

INFPs definitely become restless easily, and find themselves disliking stagnancy. When they feel trapped in one place or position for too long, they become entirely restless. INFPs want to experience things and enjoy feeling free to try new endeavors in life. They are passionate people and so they truly don’t like feeling trapped or incapable of exploring their dreams. INFPs have many dreams, and they want to be able to feel free to truly chase them. Without these options they certainly feel a sense restlessness, and this can be frustrating for them.

ENFPs are naturally restless people, who feel the need to go out and experience things. If they are stuck in one place for too long they often feel themselves becoming restless and uneasy with the stagnancy. While ENFPs do become restless easily, they don’t always seek out ways to remove this feeling, sometimes they can become caught up in their comfort zones and this does make them feel stuck in some ways. ENFPs often desire adventure and passion and so there is a part of them which can become restless easily.

INTJs only become restless if they feel like they are stuck or trapped in some way. If they don’t believe they accomplishing the things they want, or living the life they should, the INTJ can become a bit restless. Usually they enjoy certain comforts and being able to just be alone thinking and researching, and so they don’t become restless in these situations. INTJs are more likely to become restless and on edge when they are in a big crowd and feel trapped in this situation without and easy way out.

ENTJs are likely to become a bit restless if they feel like they are being held back by something. They work hard to accomplish their goals and want to achieve their dreams in life. When the ENTJs hits too many snags which can cause them to feel delayed a bit, it will certainly make them feel restless. They want to be capable of achieving these goals and don’t like feeling as if they are stuck in the same place without a sense of growth and accomplishments in their lives.

INTPs feel restless somewhat easily, since their minds are constantly moving in different directions. If they feel at all trapped then the INTP will certainly become restless, and will feel the need for change or some ways to shake things up a bit. They don’t like stagnancy and can become easily restless if they feel like they aren’t moving forward in some ways. INTPs don’t like being stuck in a rut, and need ways to break free from this or else they become unhappy.

ENTPs can become restless rather easily, and dislike feeling stagnant. They don’t want to feel trapped in the same place with the same daily tasks, and instead enjoy change and a sense of new experiences. For the ENTP it is best to keep moving, since their minds are often running around in different directions. Without some sort of way to shake things up or experience changes, the ENTP will feel extremely restless and in need of some way to break free of this stagnancy.

ISTJs don’t become restless as easy as some might, since they do enjoy comfort. For them a sense of structure and stability is something which brings them joy and peace of mind. ISTJs don’t need constant chaos and change for them to feel happy about themselves, instead they seek the opposite in their lives. They are not likely to prefer to keep moving, instead they quite enjoy being able to accomplish their goals on their own terms and in a comfortable way.

ISFJs don’t mind when things become scheduled or comfortable in their lives, and these things do not make them restless. The only time ISFJs become restless is if they feel like someone they love is in need, and they are incapable of helping. Most of the time ISFJs are not restless people, instead they enjoy living within a sort of comfort zone in their lives. They don’t need constantly change or adventure in order to feel fulfilled. ISFJs really just want to have the people they love feel safe and happy, and to have stability.

ESFJs don’t mind a sense of stability and comfort in their lives, and so they don’t become restless simply because they want change. When ESFJs do become restless it is often because they feel like they aren’t achieving their goals fast enough, or aren’t capable of taking care of their loved ones. They become restless if they feel they should be doing more but simply are not capable of it. For the most part ESFJs don’t mind a little bit of comfort and sameness, since they don’t feel a constant need for change.

ISTP
ISTPs do become restless if they are stuck in one place for too long, and need to be able to experience something new. ISTPs want to feel open to be able to hop around and live in the present moment. They don’t like feeling like they are stagnant, and really enjoy being able to dive into something new and exciting. ISTPs seek out adventure in their lives, and so without it they find themselves feeling very restless.

ESTPs do become both restless and bored very easily, and so they need to feel free to experience new things. When they feel stuck in the same position for too long the ESTP wants to be able to hop into something new and exciting. They want some sort of adventure and intensity in their lives, since they are naturally eager and passionate people. For the ESTP it is easy to become restless, and so they need to feel open to experiencing new things.

ISFPs do become restless easily, since they are dreamers who are searching for so much in life. They want to experience new things and dislike feeling as if they are trapped or unable to keep moving. For the ISFP it is not rewarding to feel safe in their comfort zone, since they want to experience passion and excitement in their lives. Without these things which inspire them the ISFP will feel restless very easily.

ESFPs definitely feel restless easily, since they dislike being stagnant and can become bored without something new. ESFPs want to experience new things and are deeply passionate people. Without some sort of freedom to bounce around and seek out adventure, the ESFP will become restless and very annoyed. For them there is nothing worse than stagnancy or complacency, and they yearn for something more inspiring.