Just How Important Candor is to You, Based on Your Personality Type 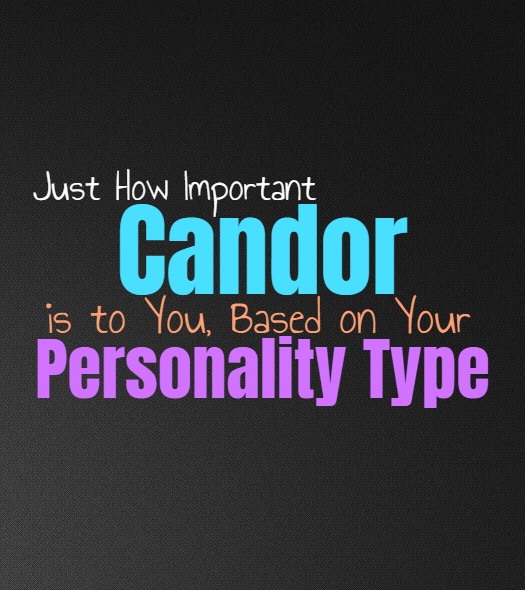 Just How Important Candor is to You, Based on Your Personality Type

For some people candor is a truly important things in life, and anything that isn’t completely honest is not worth their time. For some it is best to spare the feelings of others, instead of always being completely blatantly honest about things. Here is how important candor is to you, based on your personality type.

INFJs do believe that a sense of candor and honesty is valuable, especially with their close relationships. At the same time they also value tact, and don’t want to say or do anything which might be hurtful. INFJs often believe in balancing candor with sensitivity, so that they aren’t going to hurt people around them. For them it is just as important to think about what they say and make sure that it doesn’t cause any pain to those they care for. For INFJs being honest is definitely important, but being so honest that it becomes hurtful really isn’t the same thing.

ENFJs definitely value candor, but not nearly as much as being sensitive to others and avoiding discord. They would rather make others happy and do their best to comfort the ones they love. For the ENFJ being there for everyone and avoiding seeing them hurt, is something they value. They are naturally people pleasers, and so for them candor can sometimes be an excuse to be a bit too harsh and lacking in tact. While they do value candor to some extent, ENFJs are more in favor of sensitivity and pleasing those they love.

Candor is definitely important to the INFP, since they are deeply moral people. They often believe that honesty is an important way to build trust in their relationships. For them it is often better to be sincere than to lie for the sake of avoiding trouble. INFPs are capable of being sensitive though and they want to avoid hurting people they love. They won’t be tactless in their expression, but they do believe in being honest at the same time. They are often capable of being completely honest and standing up for their beliefs when it is right.

ENFPs definitely believe in a sense of candor in their lives, especially with the people they love. They believe that speaking from the heart and telling the complete truth, is more important than sparing someone’s feelings. This doesn’t mean they will be blunt or rude, but they do what to express things candidly. For the ENFP lying or withholding details comes from being insincere, and this isn’t a way they want to build their relationships.

INTJs do believe in candor and often feel it is more important than sparing someone’s feelings. They are upfront and honest people and so they believe in expressing their point with sincerity and truth. Instead of having to dull things or hold back for the sake of someone else, INTJs believe in complete and total candor in how they express things. They want to always be upfront and so for them it shows more respect to be completely candid in their daily lives.

ENTJs do believe in candor, since they feel it is showing respect to be upfront with people. They don’t like holding back or pretending for the sake of someone else’s comfort, instead they do believe in candor. ENTJs are upfront and unafraid of expressing the truth even when it can come off as a bit harsh or difficult to handle for some people. To the ENTJ it is best to stand up for what they know is right and to be completely candid in how they express themselves so that people can see the truth instead of some watered down story.

INTPs do believe in candor to some extent, especially when they are trying to convey a point. When they are clarifying something they want to be precise and accurate with every single detail, and so candor is important. In these situations INTPs don’t want to water things down, instead they want to be sure they are telling the whole truth so that people get the facts. When it comes to their emotions though, INTPs can struggle with complete candor, since they have a hard time expressing themselves openly.

ENTPs often feel that candor is important in most circumstances, especially when it comes to expressing a point. They want to be clear and concise when they are trying to debate a point, or just when they are spreading the truth. For the ENTP candor is something that is necessarily in most situations, but there are times when they might hold back a bit just to prove a point. ENTPs don’t always speak or live in absolutes, since they want to adjust based on the situation and what fits best.

ISTJs definitely believe in complete candor, even if it can feel a bit tactless to some. For them it is important to be upfront and to express things clearly and accurately. For them anything that isn’t completely honest and candid, often leaves out important points which could make them more efficient. This doesn’t mean they are open about everything, but when they are expressing a point they want to be around people who possess a more candid and honest personality.

ESTJs are definitely people who feel that candor is a valuable thing in life, but for some people they take this a little far. ESTJs aren’t always the most tactful people, simply because they believe in expressing their truth with a sense of transparency. For them it is best to be upfront and completely honest, instead of holding things back in a way which might seem fake. A lack of candor often hinders their ability to be completely efficient in a situation, and so they don’t believe in being that way.

ISFJs might feel that candor is only important in certain situations, since sometimes it can take things a little too far. While they believe in being honest, sometimes they prefer to be kind instead. For the ISFJ someone who uses being honest as a means of hurting people, is extremely cruel and immoral. They would rather be sensitive to the emotions of those around them, and so sometimes being entirely candid isn’t a good thing.

ESFJs might not feel that complete and total candor is something that is good in their relationships. While they believe in honesty with most things, they often feel that being too straightforward can be harmful. They don’t want to say anything which might hurt people, especially the ones they love the most. ESFJs might forgo being entirely candid in order to make sure their loved ones are happy and cared for.

ISTPs actually do believe in candor and in being completely straightforward. Sometimes this can make them see a bit tactless, since they would rather be honest than hold back. When the ISTP needs to express a point to someone they will certainly be upfront and entirely straightforward about their thoughts and feelings on the subject. They are factual people and so for them being wishy washy about something just to spare someone’s feelings, is not a good thing.

ESTPs do believe in candor, but this can be something they take rather far at times. They believe in being completely straightforward and don’t want to hold back. Sometimes they might express their truth in a way that feels a little bit too candid, since it can be somewhat hurtful without intending to be. ESTPs simply want to be upfront with people, especially if they feel like this candor will help them improve their lives.

ISFPs believe in candor, especially when it comes to their close relationships. They feel like straightforward honesty is important for building trust and for being themselves entirely. For the ISFP a moral compass is an important thing, and so this means being honest and upfront about things without pretending or hiding. While they do believe in this sense of candor for most situations, they don’t believe it should come at the cost of being kind to people.

ESFPs are often very upfront with their thoughts and feelings, and so a sense of candor is truly important for them. They don’t believe in pretending or holding back just to spare someone the truth in most situations. While they do care about the feelings of others, for the ESFP being themselves and being completely candid is valuable. They want to be able to communicate openly, without being afraid that someone will get mad at their honesty.