Are You Someone Who Likes Spilled Tea, Based on Your Personality Type 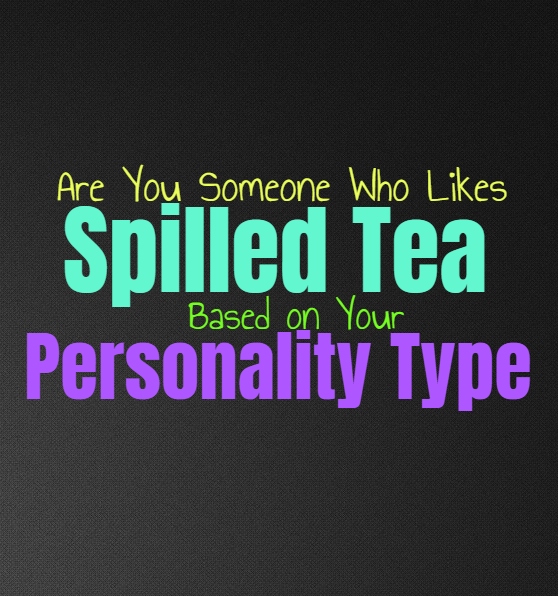 Are You Someone Who Likes Spilled Tea, Based on Your Personality Type

No, we aren’t referring to actual spilled tea, but in the more metaphorical sense, which pertains to spilling a little bit of drama instead of keeping it to oneself. For some people it is best to keep this drama to themselves and avoid spreading it around, while for others it is intriguing to stir the pot a bit. Here is how you feel about spilled tea, based on your personality type.

INFJs might appear more reserved and like they keep to themselves, but that doesn’t mean they don’t pay attention to a bit of spilled tea. They might not be the ones doing the spilling, but they do keep themselves aware of what is going on in their circle. INFJs are more likely to pick up this information and keep it to themselves, or only share with someone they trust to gossip with just a bit. For the INFJ it has to be someone they completely trust to share this with, someone they share everything with and so it feels

ENFJs do sometimes enjoy a bit of spilled tea, without necessarily intending to. They just don’t like being left out of the loop with things and enjoy being aware of what is really going on. For the ENFJ it is important to always know what is happening within their inner circle, even if it includes a bit of drama. Sometimes ENFJs can get caught up in this drama, wanting to hear all about the spilled tea and any bit of gossip pertaining to people or things they are interested in. They do sometimes feel bad about this, since their intentions are never harmful, simply out of curiosity.

INFPs don’t really like when people spread secrets, and so they try their best not to be the ones spilling the tea. Although sometimes their curiosity can get the better of them and the INFP wants to hear about the underlying drama. In these situations the INFP is more likely to be the listener, just paying attention in the background while the tea is spilled. They might stand up and speak if someone they love is being talked about and they feel the need to come to their defense though.

ENFPs do sometimes get caught up in a bit of spilled tea, wanting to hear about the drama going on. For them it is more about being curious and not wanting to be left out of things. ENFPs don’t like feeling as if they are being ignored or pushed out of the loop. When certain details are being shared they do sometimes want to hear about it, especially when they are younger. When the ENFP gets older and more focused on their personal lives, they can find themselves feeling the opposite of this and wanting to avoid that pointless drama completely.

INTJs can sometimes find spilling the tea and getting caught up in drama, to be a bit childish and annoying. For them it often depends on their current mood and what the drama is pertaining to. If they are genuinely interested in the information or feel it could be useful in some way, they might find themselves a little more drawn to the idea. INTJs aren’t really ones to spill the tea themselves most of the time, since they keep to themselves and tend to avoid too much interaction which might leave them feeling sincerely drained.

ENTJs do sometimes get a bit caught up in the spilled tea, wanting to hear about the drama. They often do this because they don’t like being left out of the loop and sincerely want to know what is going on with their group. ENTJs don’t want to avoid the drama and spilled tea, only to find out that they are being pushed out because they failed to keep up with things. For them it is more about understanding their friends and what it really going on with them.

INTPs don’t usually concern themselves with spilled tea or pointless drama, unless it is something which seems valuable to them. They sometimes like being the fly on the wall, and will just listen in and try to learn anything they can from what is going on. Most of the time though, INTPs can be bothered by people who seem to spread drama and enjoy this type of gossip. For the INTP it makes it difficult for them to trust people, seeing how they can simply spread this information without considering the person they are talking about.

ENTPs do sometimes enjoy spilled tea, since they like anything that isn’t boring or mundane. If the drama is juicy and entertaining, they might want to hear a bit about it. They especially want to spill the tea when it connects with someone they don’t personally like all that much. This isn’t because ENTPs enjoy the drama, they simply like being in the know with things. For them spilled tea is sometimes a useful way to learn about people and their unique personalities and behaviors in any given situation.

ISTJs aren’t really fans of spreading drama or even of paying close attention to it. Most of the time they are the ones to scoff at this types of “spilled tea,” probably find the term for it to be foolish as well. ISTJs would rather focus on practical things and work towards what they want in life. This doesn’t mean they don’t know how to have a good time, but for them listening to drama and gossip, is rarely something they find fun.

ESTJs might get caught up in the spilled tea from time to time, depending on the circumstances. If the drama is about someone they dislike, or connected to information which might be rewarding then they can find themselves drawn to it. For the ESTJ sometimes drama like this can feel pointless and leave them feeling more drained than anything else. They don’t like getting themselves caught up in anything which won’t be beneficial for them.

ISFJ
ISFJs do sometimes find themselves caught up in the spilled tea, since they are curious to know what is going on. ISFJs just don’t like being left out of the loop and for them it can be upsetting if they are unaware. They want to know all of the details of their group, especially when it pertains to people they care for. ISFJs can certainly find themselves interested in the tea being spilled, sometimes finding themselves caught up in it more than they want to admit.

ESFJs don’t mind a little spilled tea, as long as it isn’t hurting someone’s feelings. They don’t like being out of the loop and sometimes their natural curiosity can get the better of them. ESFJs are drawn to learning about people and what makes them tick. If there is certain drama or details being shared about a person they know, the ESFJ often wants to be caught up on this and doesn’t like being left out of the loop.

ISTPs don’t really mind spilled tea, but they usually don’t care much about it. Unless it is about someone they are sincerely interested in, ISTPs might find this type of gossip to be utterly pointless. They can become distracted by things which are too focused on people and just chatting about them. ISTPs prefer to live in the moment and experience things which excite and challenge their minds.

ESTPs do enjoy a bit of spilled tea, and even enjoy being the ones spilling it. They love being able to chat about things with their closest friends, wanting to share every detail of their lives and their days. Sometimes this means spilling the tea about someone and discussing the drama tied into it. ESTPs really don’t mind spilled tea, instead they thrive on being able to learn about the excitement in order to shake things up a bit.

ISFPs do sometimes enjoy hearing about the spilled tea and some of the more harmless gossip. They don’t like when things are spread maliciously but simply hearing about the dirt and details can be intriguing for them. They enjoy being in the know with things and don’t want to be someone who is left out or forgotten. For them it can be enjoyable to hear the details, especially if they are sharing this with their most trusted friend.

ESFPs do find themselves drawn towards a bit of spilled tea, and might even enjoy being the ones spilling it. ESFPs don’t do this to be harmful or malicious, they just enjoy being in the loop about things. For them it can be fun to share the information and getting into long conversations about it with their friends. ESFPs naturally find themselves caught up in the drama sometimes, since they are naturally curious and over the top people. For them it can be fun to hear about what is going on and how people are behaving.