ENFP Broken Trust: Dealing with Trust Issues as an ENFP 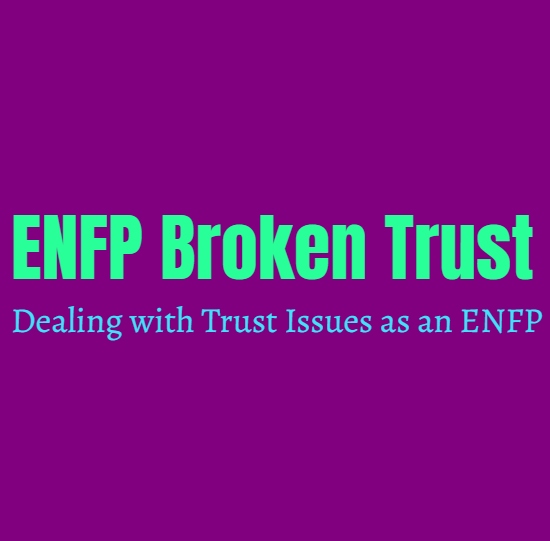 ENFP Broken Trust: Dealing with Trust Issues as an ENFP

ENFPs don’t necessarily have trust issues, naturally they trust and open people to people. For the ENFP it is easier to connect with people and try to see the good in them, rather than constantly search for how they might betray them. ENFPs would rather trust people and seek out ways to understand and help them. They don’t like being constantly doubtful and skeptical people, and would much rather be open and honest. If the ENFP has been hurt enough they can start to become a bit less trusting, and might start to struggle to open up for a while. When the ENFP develops these trust issues it can be really difficult for them, since it isn’t how they naturally feel comfortable being.

ENFPs aren’t as likely to have trust issues as some other types, since they are rather open people. They wear their hearts on their sleeve, and want to be able to share themselves with others. For the ENFP being closed off and distant is something which makes them deeply unhappy. When they see something in another person which excites them, they want to find a way to connect with that person. Sometimes this means sharing parts of themselves and really opening up to that person. ENFPs don’t like constantly feeling afraid of trusting people or being vulnerable, instead they want to follow their heart and seek out what feels right for them. They trust in themselves and in their own intuition, and sometimes this makes them much more trusting in people. ENFPs can certainly get hurt because of this, but without being honest and open they won’t feel fully like themselves. The more the ENFP closes themselves off to trust and connection, the unhappier they feel about themselves. They simply need to find people who share similar morals and people who are willing to open up in return.

The ENFP who has been hurt too many times might start to become hesitant of really trusting again. This is something which takes a long time to happen, and when it does the positive ENFP can become a bit cynical. They find themselves not wanting to really open up, fearful of being rejected or hurt by the people they care about most. Putting themselves in new situations is natural for the ENFP, which is why trust issues can really cause them to feel depressed and unhappy. They are happiest when they can feel open and really share their soul with someone special. Without these types of connections and this type of openness the ENFP can struggle to really feel like themselves. This is why having trust issues can really affect the ENFP and their daily lives, and is certainly something they should find a way to work through.

ENFPs can forgive people when they make mistakes, but they have certain inner morals and lines which they do not want crossed. There are so many things which they can forgive and move on from, but once someone reaches that point where they have gone too far it can be hard for them to really forget. They want to be able to mend things between the ones they love, but ENFPs have big hearts and this means they can get hurt easily. The fact that they can get their hearts broken so easily, can make it hard for them to move on when someone has deeply hurt them. Once the ENFP feels as if the trust is broken they will struggle to really overcome this or move on from it. They might feel like trying to work things out at first, but gradually this resentment is going to build and make the relationship difficult. ENFPs will have certain morals and ideals, and if someone does not match up with those it becomes hard for them to trust them ever again. They try to be open when a person is willing to change or make amends, but that doesn’t mean they will continue to forgive.

For the ENFP who has trust issues developed over time, the best thing is to move on from people who hurt them. Instead of remaining close to those people, they need to search for connections with people who share their morals and beliefs. ENFPs can be drawn to people because of their differences, and become fascinated with what makes that person unique and special. While this is part of what makes the ENFP open and capable of seeing good in others, it is also what can cause them to get hurt easily. They might be interested in someone who doesn’t share similar ideals, and at first this can be exciting but after a while it becomes challenging and drags down the relationship. This is why the ENFP who is struggling to trust again can really benefit from searching for people who share their morals and beliefs. Someone who won’t betray their trust because they feel similarly about their actions and choices. If this person has a strong grasp of right and wrong it can help the ENFP trust in that person and feel more comfortable opening up again.