INTJ Broken Trust: Dealing with Trust Issues as an INTJ 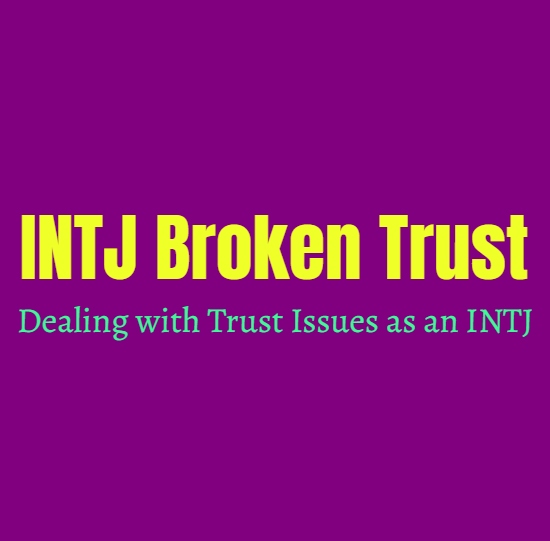 INTJ Broken Trust: Dealing with Trust Issues as an INTJ

INTJs can definitely struggle with trusting people, as this is something they feel needs to be earned. It can take a long time before they fully place their trust in another person, and this isn’t an easy process for them. They want to be sure about someone before they give them their full trust, although INTJs might express certain layers of trust to someone for certain things. They are very logical and practical about these choices, and don’t want to allow emotions to cloud their judgment. They wouldn’t consider this to be trust issues, rather than just being a bit guarded and more conservative with who they rely on. Being independent and self-sufficient makes it easier for the INTJ to rely on themselves for most things.

INTJs can struggle when it comes to trusting others, especially since they are independent people. They often prefer to do most things themselves, and might find it hard to really rely on other people. They value efficiency and often know exactly how they want things to be done. This can cause the INTJ to rely more on themselves, and struggle to really trust others to get things done. This becomes worse when they are around people who cannot seem to focus on the task at hand and just don’t value efficiency in the same way they do. INTJs know themselves and they know what they are capable of, when it comes to other people it can be hard to rely on them or trust in their dependability. This is something which can become even harder with close personal connections or romantic relationships. INTJs don’t just jump into trusting someone because they develop feelings or care about that person, as this isn’t logical to them. They want to take a step back and be sure that this individual possesses qualities which are trustworthy and have behaves in ways which express this. It might appear like a cold way to make connections or deepen bonds, but for the INTJ it is honest and rational. They don’t want to waste their own time and energy on someone if they feel like things are only going to go south later on. They want to consider things from a logical point of view, and because of this it can actually take some time before they put their trust in someone new. It can even be years before the INTJ completely lets that person in and can be vulnerable with them. If the INTJ sees reasons why they shouldn’t let someone in, they are likely to take a step back. They don’t do this to be cold or seem uncaring, they simply want to be sure about that person and if they can be loyal to their relationship.

When it comes to having their trust broken it can be really difficult for the INTJ to move on from this. They have certain layers of betrayals which they can handle and smaller things can certainly be forgiven. INTJs don’t expect people to be perfect and can certainly forgive mistakes, especially when they can see that the person is trying to grow from it. When they know someone is sincere and their actions are capable of showing improvement, then the INTJ often appreciates this type of growth and work. When someone continues to make mistakes and doesn’t seem to have any desire to change or fix themselves, the INTJ completely loses trust in that person and it can be near impossible to earn it back. INTJs will have certain boundaries and betrayals which they struggle to forgive. These major things will go against their own moral beliefs and can truly break the trust they have with someone. When this happens they are likely to disconnect from this person to some extent, or even remove them from their lives entirely. It can seem like the INTJ is cold in doing this, but in reality they are protecting themselves and doing what is best.

For the INTJ who experiences trust issues one of the best ways to improve this is to communicate more openly about their expectations. Letting someone clearly know what they want from them can help them gain a more confident idea of what can be accomplished between them. Recognizing if someone is willing to make a real effort and if they share similar morals, is going to bring the INTJ a sense of comfort. They need people who share their sense of loyalty, rather than people who are wildly different when it comes to their personal ideals. INTJs can be hesitant with their emotions, which is why it is important for them to take time to assess what they are experiencing and feeling. While being logical and rational is part of who they are, they also need to consider their emotions instead of burying them constantly. This isn’t something they should dive into for long periods of time, but certainly something they need to make some time for in order to understand themselves and their needs better. This is something which can help them trust in others better, as well as share themselves with the people they love.