Here is How Important Tangibility is to You, Based on Your Personality Type 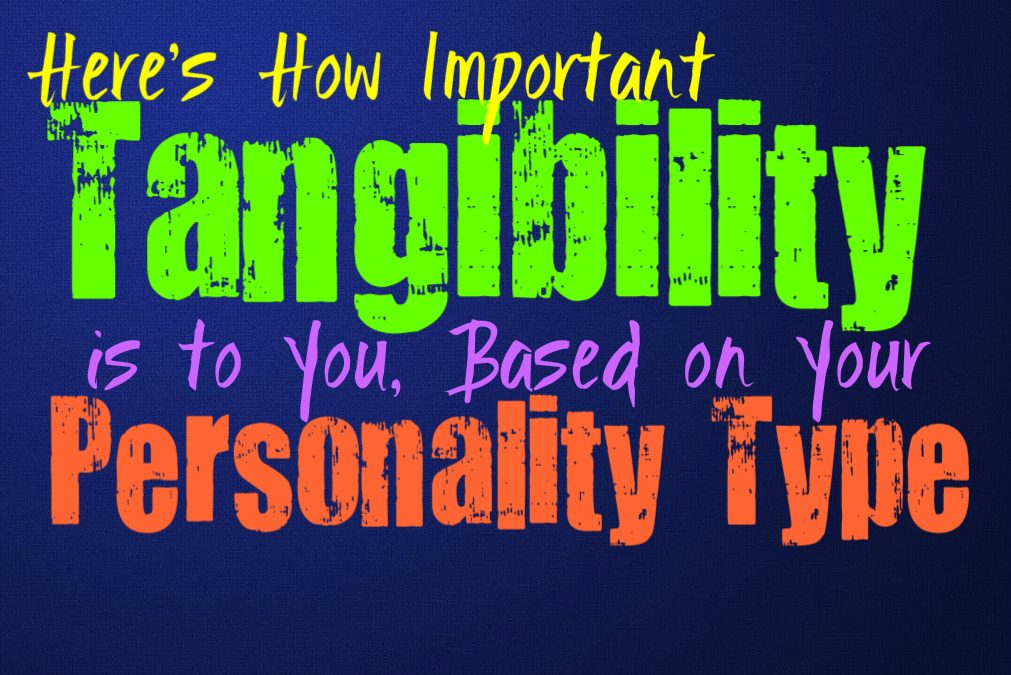 Here’s How Important Tangibility is to You, Based on Your Personality Type

For some having solid proof is vital, and having something tangible is the only way they believe it. For others it is easier to believe in something they cannot see or prove. Here is how important tangibility is to you, based on your personality type.

INFJs do believe that a certain amount of proof and evidence is important, but at the same time they often believe in the things they cannot see. INFJs are often known as paradoxes, and possess many different qualities that sometimes contradict themselves. While INFJs are practical people they are also in touch with a more spiritual side of themselves. This can sometimes cause them to believe that there are things they cannot prove, and not everything true has to be tangible. This can be challenging for INFJs, since it pulls them back and forth.

INFPs often do like to understand things on a deeper level, but they don’t need everything in their lives to be tangible. INFPs try to live with an open mind and want to feel free to explore possibilities. For the INFP it is important to use their minds and their hearts to make decisions. They do like knowing the truth about things, but they are open to believing that not everything can be proven. For the INFP to believe in something it doesn’t have to be tangible, it just has to feel right in their hearts.

ENFPs do like having tangible evidence with most things, but at the same time they realize that not everything can be proven easily. ENFPs realize that there are some things in life that are true but aren’t quite tangible. They like to live their lives with an open mind instead of doing everything with a strict attitude. For the ENFP something doesn’t have to be tangible in order for them to believe it is true, it simply has to feel right in their hearts.

INTJs definitely believe that tangibility is important, and they want to be able to prove things before believing in them. INTJs don’t like simply going on faith or feeling, they want to make sure that something is true. They value facts and evidence, and will searching to prove the things they intuitively believe in. INTJs aren’t like to just take something as true because it seems right, they want to dig deeper in order to find out what the truth really is.

For the ENTJ tangibility is extremely important, and having proof is vital to them. They don’t like simply going on faith with most things and often need to have some sort of evidence. Even if the ENTJ feels in their heart that something is true, they need to dig deeper in order to prove it. For the ENTJ seeing is much more important than simply believing, which is why they need facts and evidence in order to move forward.

INTPs often do value tangibility, but it isn’t entirely vital for them. They often want to explore things that are entirely intangible, simply because they are curious people. For them facts are definitely important, but they realize that some things take a little extra effort to uncover. INTPs have very active imaginations, which helps them dive into different possibilities. They enjoy exploring other ideas, and don’t like simply going towards what is easy to prove.

ENTPs do like looking at the facts, but they do enjoy being able to explore different possibilities. They don’t like being stuck in one idea, and believe it is important to really dive into what could be possible. For the ENTP tangibility is important, but not entirely vital for them to pursue something. They simply enjoy being able to open their minds to what could be, instead of only focusing on what definitely is.

ISTJs definitely believe that tangibility is important, and they want to seek out things that can be proven. They don’t like looking at different ideas that seem farfetched, instead they want to look at the facts. ISTJs believe in following proven methods in order to get things done as efficiently as possible. They don’t like having to explore different ideas that seem unlikely or that are impossible to prove.

ESTJs definitely like looking at evidence and facts, instead of things that cannot be proven. ESTJs believe in following what is tangible and want to focus on proven methods. ESTJs value efficiency and in order to be truly efficient they need to do things in a factual and practical manner. For ESTJs it is truly important to look at what is tangible, and they often want proof for just about everything.

ISFJs definitely do like having things in their life be tangible, and often want to focus on what can be proven. This often helps them manage their lives and take care of things in a practical way. While ISFJs to like having things be tangible in their lives, that doesn’t mean they aren’t capable of believing in things that cannot be proven. ISFJs are simply more interested in focusing on what is in front of them, so that they can take care of their loved ones.

ESFJs definitely do like having things be tangible, but that doesn’t mean they aren’t open to things that cannot be proven. For them it is simply more useful to be practical and focus on facts. ESFJs want to be able to take care of their loved ones, which is often their main goal. They try hard to get things done, and for them to be effective they need to look at the facts and what is tangible.

ESTPs definitely need tangibility before they will truly believe in something. While they understand that proving some things takes time, they won’t truly believe until this happens. ESTPs are very connected to the physical world and for them this means seeing things or holding then in their hand for the ESTP to truly believe. They sometimes have a hard time believing what others say until they can actually see it for themselves.

ISFPs do like having things be tangible, but at the same time they can be very spiritual with their beliefs. ISFPs are open minded people who realize that not everything can be proven. They follow their hearts more than anything else, and will allow this to be their guide. Sometimes this leads the ISFP to believe in things that cannot quite be proven with their eyes.

ESFPs do often like having tangibility, but at the same time their hearts guide them. While ESFPs are attached to the physical world, sometimes their beliefs branch out. They want to feel that something is right which sometimes means they don’t need factual evidence. ESFPs follow what seems right to them, and will follow this even if it seems a bit crazy.