Here’s How Each Personality Type Feels About Censorship 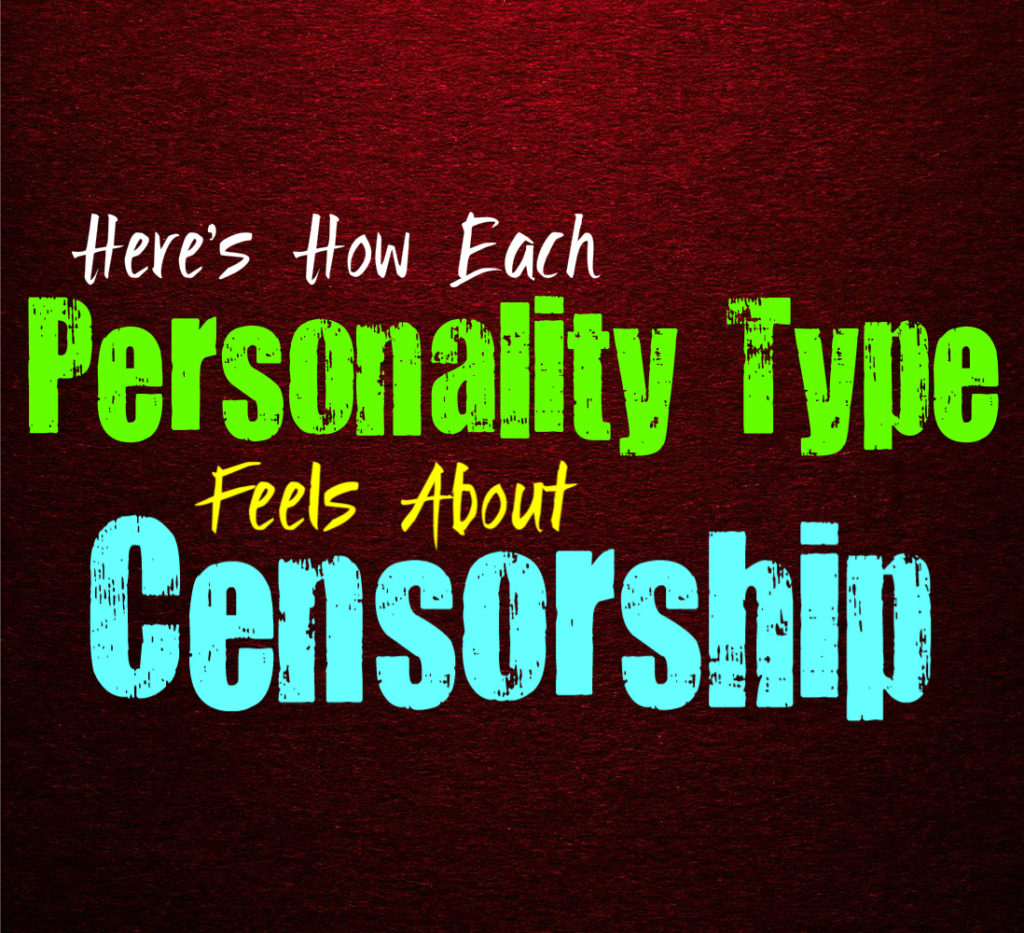 Here’s How Each Personality Type Feels About Censorship

While censorship is an idea that doesn’t bother some people, it can truly frustrate others. Here is how you feel about censorship, according to your personality type.

INFJs are sometimes reserved people, who don’t always want to share their personal info with others. While INFJs can be private, they have strong morals and beliefs about what is right. Most INFJs are definitely against the idea of censorship, and might feel like it is unjust as a whole. They believe that sharing information and being free to access that information is something that we should be allotted as humans. INFJs do not enjoy the idea of people being in control of what others can say and read or see, and will likely be very frustrated by this.

ENFJs are definitely not fans of censorship and believe that most information should be shared freely. ENFJs often believe that people should have the right to express the truth, and should be able to access this information without being held back. Taking out certain parts of a storyline just because they are a bit risqué is something that seems immoral and can really frustrate the ENFJ. They don’t appreciate when things are being censored because the sensitive nature of the subject, and would simply prefer warning labels.

INFPs are almost always against the idea of censorship, and believe that things should be expressed freely especially in art. Taking certain harsh realities out of books or movies seems like an absurd idea to INFPs, since this is a part of the story and it is important. INFPs are certainly sensitive to the needs of others, so they understand certain things can be a bit harsh for some. To them the best result is simply placing warnings on certain information, but not to censor it entirely. INFPs are very moral people who want to do the right thing, and often they are opposed to the idea of censorship because of this.

ENFPs definitely aren’t fans of censorship, and believe that things should be expressed freely. When a storyline is altered because of the sensitive nature of it, ENFPs often become extremely frustrated by this idea. They want to feel free to explore new things without having certain information withheld from them. They believe in the idea of being able to express oneself without any censorship or withheld information. ENFPs are also moral people, and the idea of censorship can definitely go against their beliefs.

INTJs are definitely not fans of censorship, and believe that information and art should be expressed freely. They can become frustrated when certain people in positions of control attempt to censor information because of the sensitive nature of it. INTJs believe that people shouldn’t be so willfully ignorant just because they are a bit sensitive to something. They want to hear and read things without having pieces withheld from the storyline. INTJs don’t enjoy censorship at all, and will often be extremely morally opposed to it.

ENTJs are not okay with the idea of censorship, and often want to have access to information. There are some situations where they might understand the need for warning labels, since some people simply cannot handle the truth. ENTJs however, dislike ignorance and don’t want to have certain things withheld from them. They try hard to ensure that they are knowledgeable and fully aware of the information in front of them. ENTJs don’t enjoy censorship for the mere fact that it keeps them in the dark in some ways.

INTPs definitely don’t enjoy the idea of censorship, although they might be able to see it from a different point of view. INTPs are always looking at things from different angles in order to fully appreciate the truth. Ultimately most INTPs will become frustrated with the idea of censorship, since they don’t enjoy getting partial information. They want to receive the facts and dislike withheld information even when it comes to art or literature.

ENTPs are definitely not fans of any information being withheld from them, because they have a natural desire to explore. ENTPs love being able to experience new things, which includes information and even art. They don’t want to read something that has been censored and is missing important aspects of it. ENTPs are definitely opposed to the idea of censorship, and would become extremely frustrated by this entirely.

ISTJs do enjoy being able to have full access to information, but sometimes they are aware that certain things are sensitive in nature. They know that not everyone is fully ready to experience certain things, so censorship protects them in some ways. ISTJs do dislike ignorance though, and want to feel free to explore things without information being withheld from them. Censorship might have its place, but in truth ISTJs often are morally opposed to information being taken away from them.

ESTJs are often so focused on getting things done that the idea of censorship isn’t always in their thoughts. They are efficient people who work hard to get things done, and believe in always pushing themselves. They are focused individuals with motivated in order to take care of their loved ones. ESTJs likely don’t enjoy the idea of censorship, but they are often more focused on practical things that are right in front of them.

ISFJs are practical people, who are mostly focused on caring for their loved ones. While they might not enjoy the idea of censorship (since in truth most people don’t) they aren’t always focused on trying to change things. ISFJs want to take care of their loved ones, and are much more focused on the things they can change. Instead of obsessing over things they would much rather focus on the taking care of others and making people happy.

ESFJs are often aware of the negativity of censorship, they just don’t want to obsess over it. They might become frustrated with the idea itself, but would rather focus on taking care of their loved ones. ESFJs are very focused on making people happy and want to create a sense of harmony in their environment. They work hard to take care of the people around them, and simply believe in doing what is right for them.

ESTPs definitely don’t enjoy censorship, but can often find themselves distracted by other things. They don’t want to dwell on things they cannot change, and can sometimes have a short attention span. ESTPs focus on what is tangible and right in front of them, and will always be in pursuit of knowledge. They simply want to learn what they can and work on developing a better life for themselves.

ISFPs are moral people who might have strong feelings against the idea of censorship. While ISFPs might dislike censorship they are capable of seeing things from different points of view. They realize that some people can become upset by sensitive information, and they realize this can be unsettling. Ultimately ISFPs would rather live in the present moment and try to seek out things that make them and their loved ones happy.

ESFPs rarely care much for things like censorship, and are more focused on living in the present moment. While they wouldn’t enjoy the idea of it, ESFPs simply won’t obsesses over it. They are more interested in enjoying their lives and want to experience things in an exciting and new way. ESFPs are always trying to seek out adventures and love being able to share this with their loved ones.