Are You Likely to Binge Things You Like, Based on Your Personality 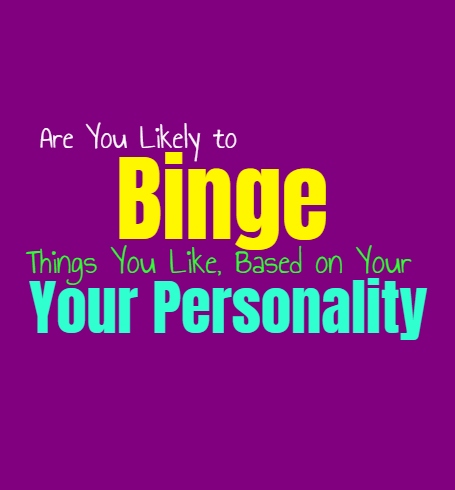 Are You Likely to Binge Things You Like, Based on Your Personality

Some people are more inclined to dive in and binge their favorite things in life. They become a bit obsessive and just cannot get enough, whether this is their favorite TV shows, books, or even some of their favorite foods. While others believe in moderation and don’t like becoming too out of control with their passions. Here is how likely you are to binge things, based on your personality type.

INFJs actually do enjoy diving into things and when they truly love something they become a bit obsessive. When the INFJs attention is caught they don’t like letting something go, and want to truly immerse themselves. They might not be someone who binges things often though, since they don’t find themselves drawn to just anything. When they do find a TV show or favorite food, it can be hard for them to just walk away from these things. They enjoy taking in the comfort of them and find themselves not wanting to stop.

ENFJs can certainly become the obsessive type of people who enjoy bingeing their favorite things. When it comes to their favorite TV shows, ENFJs don’t like simply walking away from these other worlds in which they have become truly attached. Because of this they might spend the whole day binge reading a book, or watching a show, simply because they are caught up in it. They do have a tendency to become a bit obsessive, and might not be great when it comes to moderation of these things they enjoy.

INFPs aren’t fans of having to focus on moderation, especially when something excites and inspires them. When they really love a thing, they want to bury themselves within it and not have to come out for a long time. They might spend days watching their favorite show, or reading their favorite book series, and they just don’t want to feel like they have to come out of this bubble. They can be this way with other things as well, or even with people they love and feel deeply connected to.

ENFPs really don’t like feeling forced to hold themselves back, especially when they are excited about something. They want to really dive in when they enjoy a thing, and certainly find themselves bingeing their favorites. Whether this be movies, tv shows, books or even video games- ENFPs aren’t usually great at moderation. They want to allow themselves to become obsessive and really immerse themselves in the things they are passionate about.

INTJs don’t really like feeling like they have lost a sense of control in their lives. They try to keep a sense of moderation and don’t want to find themselves bingeing something so much that it prevents them from being responsible. INTJs can certainly become obsessive over research and reading though and might spend hours immersed in this. They can often make the excuse that at least it is useful and they are learning something, but they do have a tendency to binge this way.

ENTJs do like to dive into things but not if it is going to prevent them from being efficient with what matters. They do have sometimes obsessive personalities and enjoy diving into things which excite them. For the most part ENTJs try to control themselves and don’t want to spend too much time bingeing if it is going to hold them back. They are focused people who want to be sure they are getting things done and being as efficient as possible.

INTPs don’t like feeling as if they need to hold themselves back, especially when they are passionate about something. They don’t always have a strong awareness of the physical world, since they do bury themselves in things sometimes. When the INTP is really drawn to something they do find themselves bingeing these things and really diving into them. They spend a lot of time reading and researching, and might even dive into books and shows they enjoy.

ENTPs can be somewhat obsessive people and so they do often find themselves bingeing the things they enjoy. When they are passionate about something they don’t mind immersing themselves completely. For the ENTP it is more enjoyable to give themselves the freedom to binge those things, rather than feel like they need to be responsible and in control. The ENTP will dive in when something is truly interesting, and they enjoy bingeing it for a while.

ISTJs prefer to live with some sort of moderation and control over their actions. For them beginning means they have lost a sense of focus and control over their lives. They don’t want to lose sight of what they need to get done and believe in being as efficient as possible. For the ISTJ becoming obsessive can sometimes cause them to feel like there is something else they should be doing, but there are occasions when they dive into some of their guilty pleasures, they just don’t want this to be often.

ESTJs prefer to live their lives with a sense of moderation and don’t really like letting things hold them back from getting the job done. When it comes to bingeing things, ESTJs do sometimes become obsessive over their favorite foods and activities. They will binge on occasion, but don’t like allowing anything to take control of their lives. If they feel they are losing a sense of control the ESTJ won’t allow themselves to dive in, since they want to be able to maintain this power over their own actions and their own lives.

ISFJs don’t mind bingeing on occasion, especially with things they are passionate about. When it comes to bingeing a show or book, this can actually be their way of energizing themselves. ISFJs focus hard on taking care of others and can sometimes repress their own needs because of this. So sometimes it can be nice for them to take some time to themselves to binge the things they love, so that they can catch up on some of the things they have missed.

ESFJs do often love to binge things, especially when they find something which excites and fulfills them. They spend a lot of time working hard and focusing on the needs of others, and so sometimes it feels good to unwind with something they really enjoy. They do sometimes repress their own needs, which can be a big reason why they binge things like shows, foods and even their favorite books. For the ESFJ this is their time to really dive into something, without feeling a sense of guilt about it.

ISTPs enjoy immersing themselves in the things they are passionate about, and so they do enjoy bingeing sometimes. For them it is about diving in and allowing themselves to do whatever excites them. They might become bored of something after a while, but that doesn’t mean they won’t binge while it is still exciting and enjoyable for them. ISTPs do whatever feels right in the moment and don’t focus too much on what might happen after.

ESTPs focus on living in the present and doing what feels right and so because of this they do have a tendency to dive into things and binge them. They don’t like feeling as if they need to take a step back or moderate themselves, instead they want to really just immerse themselves in the things they are passionate about. For the ESTP bingeing their favorite shows, foods and books, can be something which inspires them and makes them feel a bit more alive.

ISFPs definitely enjoy bingeing things and really don’t like feeling a sense of guilt over this. When they love something they want to feel free to dive right in, and don’t like feeling restrained or held back. For the ISFP it is about living in the present and doing whatever makes them happy. They don’t want to live with regret and don’t like when people try and control their actions or make them feel guilty when they binge something they love.

ESFPs are passionate people who believe in going after what they want in life. They don’t want to feel guilty if they feel the desire to binge something, and instead just focus on doing what inspires them. When they really enjoy things ESFPs might have a hard time living with a sense of moderation. They prefer to live passionately and go after whatever brings them a sense of joy in the present moment.