Here’s How Articulate Each Personality Type Truly Is 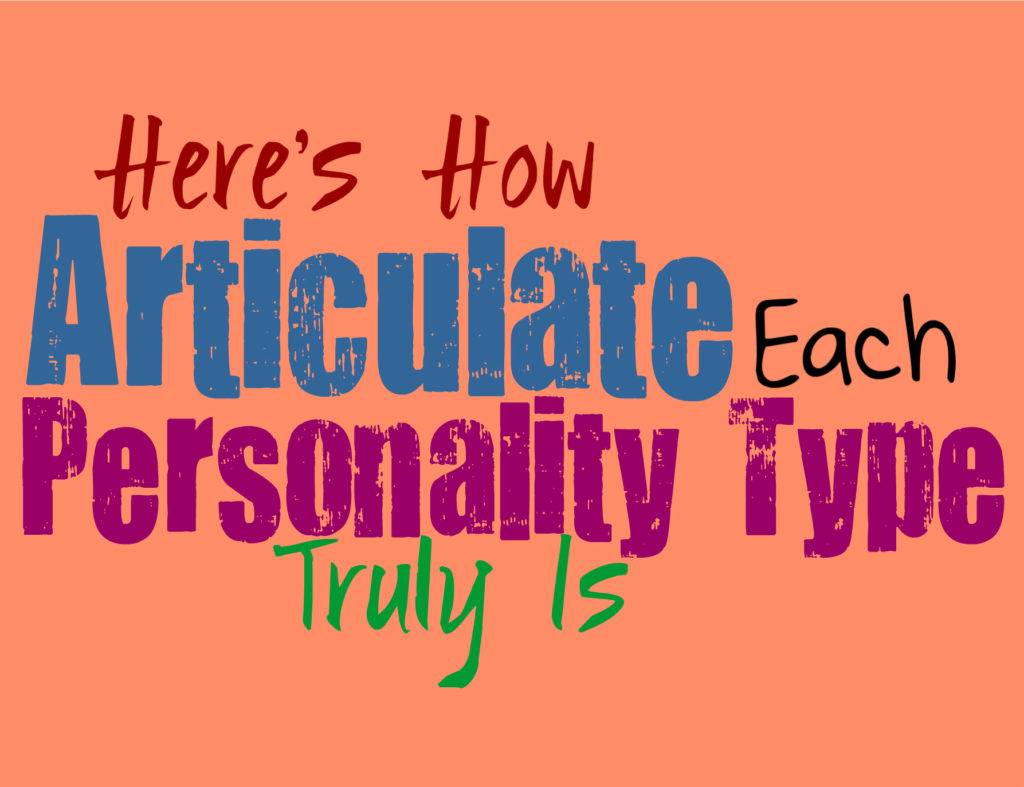 Here’s How Articulate Each Personality Type Truly Is

While some people have a way with words that just flows easily, others can struggle to express their thoughts. Here is how articulate you are, according to your personality type.

INFJs are extremely skilled with words, and often have a way of explaining things in a way that offers a great amount of insight. INFJs are also capable of putting their incredible thoughts into words, but this can take some time. They have such rich inner minds, which sometimes makes it difficult to retrieve those thoughts in a way that people can entirely comprehend. When the INFJ does best, is when they feel comfortable enough to take their time in order to fully express themselves. They are often very witty people, and can certainly impress people with their verbiage. Over time the INFJ can learn to be incredible articulate with verbal communication, but they are naturally articulate when it comes to writing things out.

ENFJs are incredibly articulate people, who posses a natural skill with words. ENFJs have a way of reading people and understanding how to best communicate with them. They are rarely afraid to express their thoughts, and have a way of making people really enjoy their presence. ENFJs often have a natural flow with their words, both verbally and with writing. They are charismatic and articulate people, which often helps them connect with others in a rather natural way.

INFPs are very internal people, with incredible magical inner worlds. Their thoughts are often rich with intrigue and smooth wording. When INFPs attempt to verbally express their own thoughts they can sometimes have a hard time getting things out properly. INFPs spend so much time in their own thoughts that is can be difficult to fully explain themselves to others. They can sometimes feel awkward and fumble with their words, but when it comes to writing INFPs are often entirely different. They simply need time to process their feelings into words that other people can comprehend.

ENFPs are very open and expressive people, who often enjoy being able to communicate with others. They are charismatic and outgoing, which helps ENFPs communicate in a rather articulate manner. When they want to express themselves a certain way, ENFPs are often entirely capable of doing so. They do have moments where they are entirely goofy and a bit all over the place, but in most cases ENFPs are articulate and charismatic.

INTJs are very introverted and internally focused people, which can make them a bit avoidant when it comes to a lot of social interaction. They often feel most at home in their own worlds, processing and analyzing their thoughts. Although they aren’t always the most outgoing people, INTJs are actually extremely articulate. They are capable of taking their time and preparing the proper words to say to someone. The intelligence of the INTJ often shows with the way they articulate their thoughts.

ENTJs enjoy being able to communicate in a way that can command a room. They are driven and intense people, who are very skilled at articulating themselves. They know how to put things into the right wording in order to best dominate a situation. The way ENTJs communicate often helps them become excellent leaders, who know how to bring people together in a efficient way. Their communication skills are often very efficient as well, which makes ENTJs rather articulate people.

INTPs are very internal people, with rich and active inner minds. The fact that the INTPs thoughts are so internally focused, can give them trouble when it comes to articulating them. INTPs can struggle to put their thoughts into words in a verbal way. They are often skilled at expressing themselves with writing, once they have time to think and process things. INTPs have so many thoughts at the same time, which can make it challenging for them to be fully articulate.

ENTPs are very charismatic and entertaining people. They often have a way with words which can be rather charming for others. ENTPs are also very skilled with verbal debates, making them rather articulate people. They definitely have very internal thoughts, but ENTPs have developed a way of expressing themselves properly. They enjoy being able to explore new things, and this includes how they communicate to others.

ISTJs can be very internal people, and enjoy having plenty of time to themselves. They have an incredible work ethic which helps the ISTJ progress in life. They don’t always enjoy socializing, but that doesn’t hinder them when it comes to articulating themselves. ISTJs often know how to express their thoughts in a way that is very clear and concise. They may not love communicating, but ISTJs are naturally articulate people.

ESTJs are outgoing and friendly people, who are perfectly comfortable communicating with others. They can be articulate when they take the time to do so. ESTJs can be rather energetic at times, which sometimes causes them to ramble. When the ESTJ is calm and thinks about their words, they are capable of articulating well.

ISFJs are naturally good with people and with using their words properly. They are often articulate people, who know how to express themselves. They aren’t always the most outgoing individuals, but what they do say is articulated very well. They are often patient and allow themselves to think things through before simply blurting it out. This ability to process their thoughts helps the ISFJs be more articulate people.

ESFJs are naturally communicators, and are often very articulate. They are skilled at reading people and know what they should and should not say in most situations. ESFJs are comfortable speaking with people, and know how to articulate very well even with strangers. ESFJs often enjoy written expression, which helps them develop a stronger vocabulary. Having a somewhat vast knowledge of words, helps the ESFJ be even more articulate.

ISTPs are very internal people, who enjoy spending much of their time inside their own analytical minds. They are usually rather intelligent, especially when it comes to problem solving. ISTPs aren’t the most expressive people, and in most cases they prefer to keep their thoughts to themselves. ISTPs do not let people rush them, which helps them put things into words when they so choose. ISTPs might not speak much, but when they do it is with intention.

ESTPs are charming people, who enjoy being able to impress others. They do have moments of awkwardness when it comes to communicating, but most of the time they are rather articulate. They have a way of expressing themselves so that people aren’t concerned with how well they worded things. ESTPs charismatic personalities help them get away with a lot, even on days when they aren’t feeling that articulate.

ISFPs are very introverted and internally focused people. Their morals are a big part of who they are, and so are their emotions. ISFPs can sometimes struggle when it comes to articulating their thoughts and feelings, simply because they have so many. They can sometimes have a chaotic and messy way of expressing themselves to others. Because their emotions are so powerful, ISFPs do sometimes struggle to be articulate with verbal communication.

ESFPs are social butterflies, who enjoy being able to entertain others. They have a natural way of communicating, which often puts others at ease with them. ESFPs aren’t always the most amazingly articulate people, simply because they are so open and honest. Instead of taking a long time to process things, ESFPs just let themselves express whatever they want in that present moment.