INFJ Loyalty: What Being Loyal Means to the INFJ 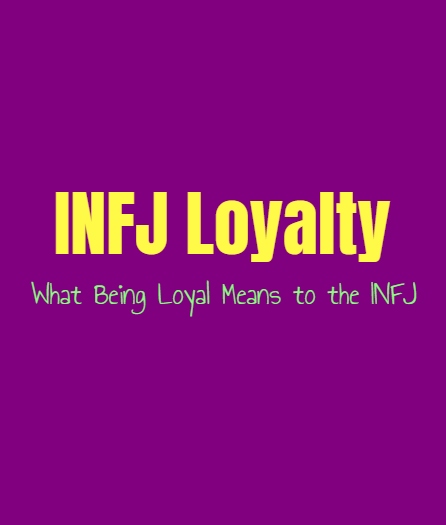 INFJ Loyalty: What Being Loyal Means to the INFJ

INFJs definitely value loyalty and hold this as an extremely important part of any relationship. They don’t just expect this from romantic connections, but from friendships as well. When the INFJ has someone they care for enough to let into their world, then loyalty becomes a truly vital part of this bond. They take relationships seriously and have their own idealist views of how things should go. This can make the INFJ have rather high expectations, but the truth is they are willing to give much more than they get from those close to them. It just means they have certain non-negotiable aspects of any relationship, or else they eventually feel the need to disconnect.

What Loyalty Means for the INFJ

For the INFJ having a sense of loyalty and faithfulness to those they love, is truly vital. They don’t believe in making close connections if they aren’t going to take them seriously. INFJs can be rather guarded people who put distance between themselves and other people. They often build up walls and don’t truly show themselves to people until they feel they can trust them. This is something which takes time and trust, and so the INFJ needs to be sure they can rely on these people to truly open up to them. It is a process for the INFJ but their loved ones will earn an extremely loyal and worthwhile bond. When they let someone in the INFJ will do anything for that person and believes in always standing by them no matter what happens.

For the INFJ loyalty means being able to trust someone to always be there and stand by them. The INFJ wants to know that if the whole world were to turn against them, those people closest to them would not. They need people who will defend them and stand up for them against people who try to harm them. The INFJ will offer this to their loved ones, and are fiercely loyal to the people they care for. If anyone does even the slightest thing to hurt the people they love, the INFJ can become somewhat vicious towards them. They are kind and giving people but when someone harms the people they love, they shift to being somewhat intense and even frightening. They do this because they want to protect the people close to them, and don’t want to see any harm come to them. For the INFJ this is what loyalty means, and so they don’t want to do anything that might jeopardize this. They might not expect quite the same level of fierceness, but they do want loved ones who share this desire to protect the INFJ as well.

INFJs also believe that loyalty means they can trust these people and rely on them when they are in need. It means believing in the people they love, and always standing up for them when they need the support. Loyalty to the INFJ means never doing anything which might betray the trust of the people they love, even if that means sacrificing their own needs. For the INFJ loyalty and trust are some of the most important things to have in any relationship. They value their friendships just as much as romantic connections though, and expect this type of loyalty from anyone they let into their hearts in this way. To some these standards might seem a bit high, but like with anything they do the INFJ expects much more from themselves. They hold themselves to an even higher regard and will experience immense guilt if they feel like they haven’t lived up to these expectations. Even the smallest mistakes against the people they love will cause the INFJ to blame themselves and want to search for ways to make amends. They often feel bad about things that their loved ones don’t even notice as something negative. This is simply because they care so deeply, and want to always be perfect for the people they love the most in the world.

While INFJs are forgiving and loving people, they really don’t handle betrayal all that well. They can understand when people make mistakes and will do their best to forgive those at first. After too many mistakes and betrayals from those around them, the INFJ starts to shift how they feel about this person. When someone they love continues to hurt them in this way, the INFJ will reevaluate their relationship and if that person is actually loyal and caring. Someone who is not truly loyal to the INFJ will eventually be someone they need to remove from their lives. This is where the INFJ door slam comes into play, and where the INFJ needs to disconnect from relationships. This isn’t something which they do easily, and can be rather painful for the INFJ to come to grips with. They don’t want to let go of those they love, but without loyalty and trust the INFJ doesn’t feel like their relationships are worth much at all.