INFP Friendships: How the INFP is as a BFF 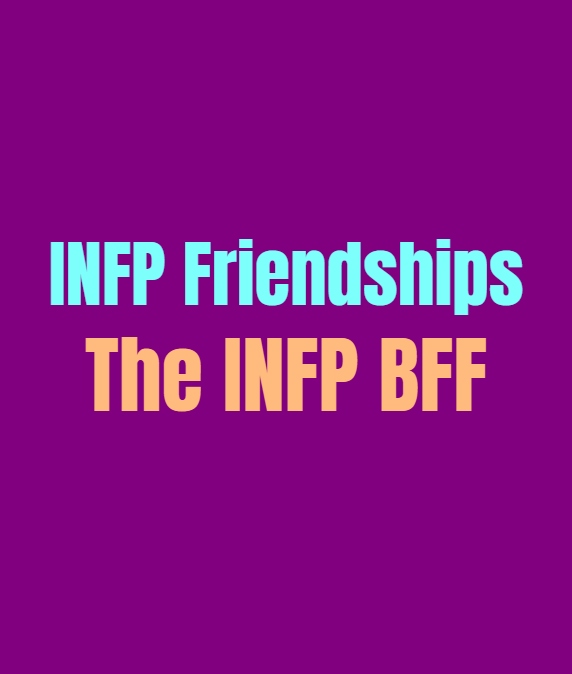 INFP Friendships: How the INFP is as a BFF

When it comes to relationships, your close friendships are truly important. We cherish these connections because without them we often feel a sense of loneliness. While having a romantic partner is certainly nice, that doesn’t mean friendship isn’t just as important or even more important for some people. Having someone you can trust and rely on no matter what, someone who simply wants to spend time with for who you are, that is a valuable thing. Each person has a different idea of what they want from a friend, and what they think is most important in these types of relationships.

For the INFP being a friend is deeply important and meaningful and they value their connections. They often take their close friendships seriously, especially the person they consider to be their best friend. For the INFP it is important to work on these relationships and be someone who is there for the ones around them. Knowing how each personality type values their friendships and how they behave as a best friend, can certainly be a great way to understand them and their behaviors much better.

The Best of the INFP Best Friend

As a best friend the INFP is an incredible listener, who enjoy being supportive for their loved ones. The INFP will be there to just listen when their friend needs to vent or chat about something that is bothering them. They are great at showing their support and making sure their friend knows that they are truly invested in what they have to say. This is one of the truly amazing qualities the INFP possesses as a friend, and brings a sense of warmth to their friendships. Being someone who can just sit there and listen to their friends talk, and not have judgements or interrupt when they really need to get something out, is something which the INFP can do with ease. They actually enjoy being someone their friends can turn to, and genuinely find themselves invested in their lives and interests.

INFPs are extremely loyal, especially to their best and closest friends. They will do anything for the people they love, and will stand by them when no one else will. The INFP is loyal beyond right or wrong, and will be supportive of their friends no matter what. While they have strong inner morals and will certainly express when they disagree with their friends actions, that doesn’t mean they will turn their back on them. The INFP believe sin standing by the people they love and not abandoning their friends simply because they make mistakes or seem to be falling apart. They will often stand up for these friends against others, in a way which is loyal and very protective. INFPs might not believe in confrontation when they can avoid it, but they will certainly get into arguments for the sake of someone they care for.

INFPs see the best in their friends, and often believe in them no matter what. They can see where they have potential and often imagine the many things they are capable of achieving. This is what makes the INFP the biggest supporters and fans of their friends. They will be there to lift them up when they feel down on themselves. INFPs don’t believe in being the person who see the bad in their friendships, instead they want to be someone who believes in them and sees who they are deep inside, beyond the flaws and mistakes.

The Worst of the INFP Best Friend

While there might be many positive traits to the INFP best friend, there are some things which can cause tension as well. These things aren’t necessarily weaknesses or bad things, they simply cause discord sometimes within their closest friendships. INFPs do care deeply for their friends and will try their best to overcome these struggles, wanting to be capable of supporting them through anything.

INFPs are sensitive people, which means they can get their feelings hurt easily by others. When it comes to their closest friends the INFP is even more sensitive and can get their feelings hurt deeply. The INFP doesn’t want to be so sensitive to the words and actions of others, but when they love someone it becomes impossible to disconnect from this. They can become wounded by the wrong words and find themselves retreating inward because of it. This can be difficult for their friends who might not realize what is going on, or why the INFP is so easily hurt when they never intended to upset them. This can cause some strain on the friendship at times, especially if their friend struggles to figure out when the INFP is going to be hurt by something. The best way to overcome this, is simply by clear communication. The INFP might get hurt easily but when their friend shows they care and didn’t mean to upset them, it can help them to move on from this and go back to their normal interactions.

INFPs are also introverts who need plenty of time alone, and sometimes this makes them want to retreat. While their friends might be ready to go out and have a good time, the INFP have moments when they just need to be alone for a while. They often don’t mind sitting in silence with someone close to them, but going out into large groups is going to be exhausting for them. INFPs know how to have a good time, they just have certain periods of time when they need to be alone and away from the noise of the world. This is something which is certainly not a negative, but can be seen that way by someone who doesn’t fully understand it. This is why the INFP needs friends who can appreciate their need for alone time, without being offended by this.

If their friends can understand these aspects of the INFP than they will certainly have a wonderful connection with them. INFPs are supportive and loving friends, and enjoy being there for the ones they love. Having the INFP as a best friend really is a wonderful gift, and one that should be appreciated by those lucky enough to find this type of bond.