Do You Believe In Luck, According to Your Personality Type 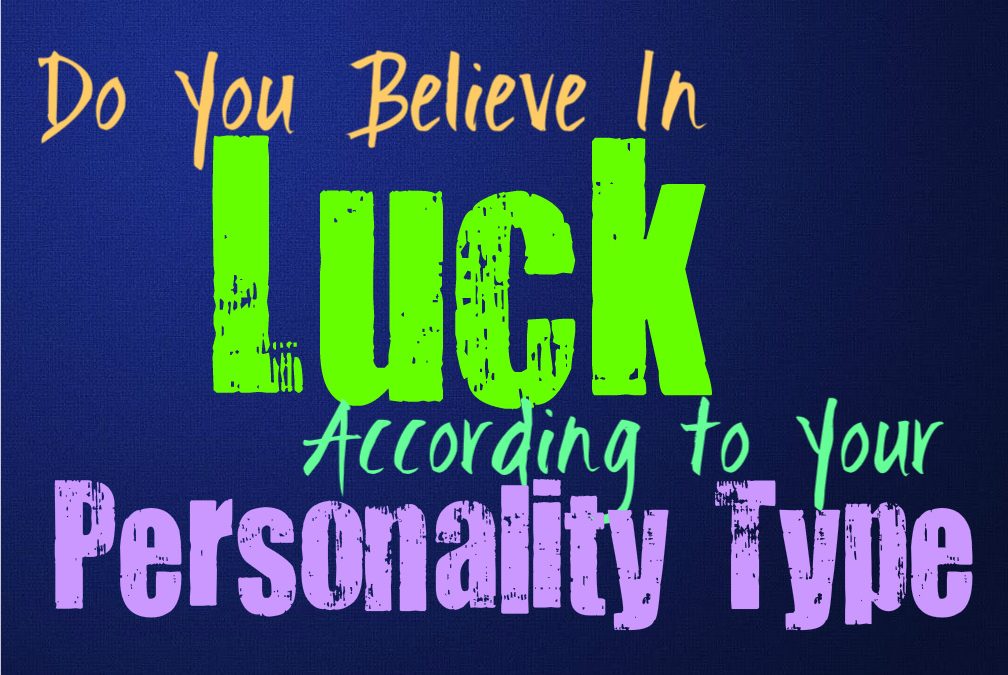 Do You Believe In Luck, According to Your Personality Type

Some people believe that sometimes you just get lucky, while others feel things are much more intentional. For some the lack of belief in luck is because they believe we make things happen for ourselves, while for others it is a belief in something like destiny instead. Here is how likely you are to believe in luck, according to your personality type.

INFJs are both logical and emotional people, and so these two things are often at war. This can cause the INFJ to believe in certain things like destiny, but at the same time feel a pull towards things that are more scientific. While they do often believe in destiny, INFJs struggle to really believe in a sense of luck. They are more interested in the things which makes logical sense and seem more substantial. If the INFJ expresses a belief in something like mere luck, it is likely when they are feeling a bit down and not quite like themselves in that moment.

ENFJs usually believe that they make their own luck in life, simply by working hard and striving to do what is right. They do sometimes feel a drawing towards something like destiny, since they can be somewhat spiritual people at times. For them luck seems a bit foolish though, since they take more responsibility for their own actions. ENFJs strive to work hard and want to ensure that everything in their lives is the way they want it to be. They strive to be able to take care of their loved ones and don’t want to let anything stand in their way.

INFPs can sometimes believe in luck and more intangible things, especially when they are feeling a bit underwhelmed with how things are going. They might hope for a little more than just luck though, and find themselves drawn to something more like destiny. INFPs want to believe that they are meant to accomplish something more in life, and feel like they have some sort of untapped purpose. INFPs can go back and forth with certain things like luck, depending on their current mood and what inspires them the most.

ENFPs are curious people who enjoy exploring different options without being too closed minded about it. They will definitely take time researching and learning about different subjects, and do have a logical part of their minds. While they do consider things from a more scientific point of view, ENFPs also have a spiritual side which might be drawn to things like destiny or even luck on occasion. While they don’t like getting too hung up on whether or not they are lucky, it is something they might consider.

INTJs are very logical people and so they rarely believe in things like luck. For the INTJ believing in luck just seems completely foolish, and like an excuse to be lazy and rely on some mystical force. They believe in working hard and using their minds to go after the things they want in life. INTJs believe that they make their own “luck” by pushing to accomplish their goals and move forward in their lives. They are not afraid of having to overcome struggles or obstacles, and won’t just use luck as an excuse for why things aren’t coming easily for them.

ENTJs are driven and practical people, and because of this they don’t like just believing in something as intangible as luck. They often believe in focusing on the problem and working to solve it without allowing anything to hold them back. For the ENTJ luck often appears foolish and almost like an excuse to be a bit lazy. They don’t like making excuses, instead they believe in working hard to get things done the way they want. For the ENTJ the use of luck is definitely an excuse, and so they rarely believe in it.

INTPs are logical people and so because of this they rarely find themselves believing in things like luck. They do consider different options and possibilities, but luck isn’t something that has enough to support it most of the time. INTPs can believe in some intangible things, but they need to have a little more to substantiate their existence. They are naturally curious people who enjoy thinking about different possibilities like the idea of destiny, but for the lucky is usually not something they believe in.

ENTPs are curious people who definitely believe in considering different options and possibilities. They don’t like being stuck in the belief of one thing, since this can really block them from uncovering the facts of a situation. ENTPs will consider all the angles before coming to their final conclusion of what the truth really is. While they might consider the possibility of luck, they rarely find enough evidence to fully believe in it. Instead they are more interested in logical answers, and things that can actually be backed up.

ISTJs don’t often believe in things like luck, since they are naturally very practical people. They focus on making their lives the way they want, instead of just allowing things to happen to them. ISTJs don’t like believing in things that they cannot see or prove, and so luck often seems completely foolish to them. For the ISTJ the idea of luck can feel like a lazy persons excuse to simply rely on something else instead of themselves.

ESTJs aren’t likely to believe in something like lucky, since they are much more focused on the things that can be proven. They are practical people who believe in things that are tangible and factual. For the ESTJ the idea of luck often seems like a silly excuse and so they prefer to get things done and be more efficient. There are times when the ESTJ feels a bit down on their luck, and their minds might consider things like the idea of bad luck. This is often a momentary lapse and the ESTJ will realize this isn’t true.

ISFJs don’t often focus on things like luck since they are more drawn to being practical. They work hard to take care of their loved ones and provide for them. They care about their families and so they don’t want to just rely on luck to make them happy. Instead the ISFJ works hard and focuses on making things happen on their own terms. They might have moments when they believe in more spiritual ideas, especially if it is something they grew up believing in.

For ESFJs luck can seem a bit silly, but they open consider it during certain times in their lives. Most of the time they are more practical people who believe in getting things done themselves. They care deeply about their loved ones and work hard to provide for them. For the ESFJ it is important to focus on tending to these things, instead of just relying on luck to get it done. While they do sometimes believe in things on more spiritual terms, this often comes from being raised in this environment.

ISTPs aren’t likely to believe in something like luck, since they are much more logical people. They follow the things that are right in front of them and are much more tangible. For the ISTP the belief in luck often seems foolish, and so they try to avoid these types of beliefs. They do live very much in the present and sometimes this takes them down unusual paths, but ultimately ISTPs don’t really believe in luck at their core.

ESTPs believe in things that are factual and tangible, and don’t like following things that don’t appear logical to them. When it comes to their beliefs ESTPs have a hard time trusting anything that they cannot prove or see for themselves. They don’t like considering different ideas that don’t have concrete evidence, since this often seems like a complete waste of their time and energy. While ESTPs enjoy living in the present and sometimes this leads them down unusual paths, they always end up in the most logical place.

ISFPs do sometimes believe in things like luck, since they don’t always feel the need to focus on things that are completely tangible. They follow their hearts and sometimes this means going down roads which are a bit unusual. For the ISFP it entirely depends on their emotions in that moment and what feels sincerely right for them. There are times when they go after things that seem a bit illogical, but it simply means they are doing something others can’t quite understand.

ESFPs do sometimes believe in things like luck, since they follow their hearts and do what feels right in the moment. Sometimes they can follow a belief in something like luck, but even more likely they believe in things like destiny. ESFPs simply do whatever feels right, and sometimes this means believing in something for the moment. They might go back and forth in what they believe depending on their situation, but sometimes they do find themselves believing in luck.