Do You Feel Comfortable with Confessing Your Mistakes, Based on Your Personality Type 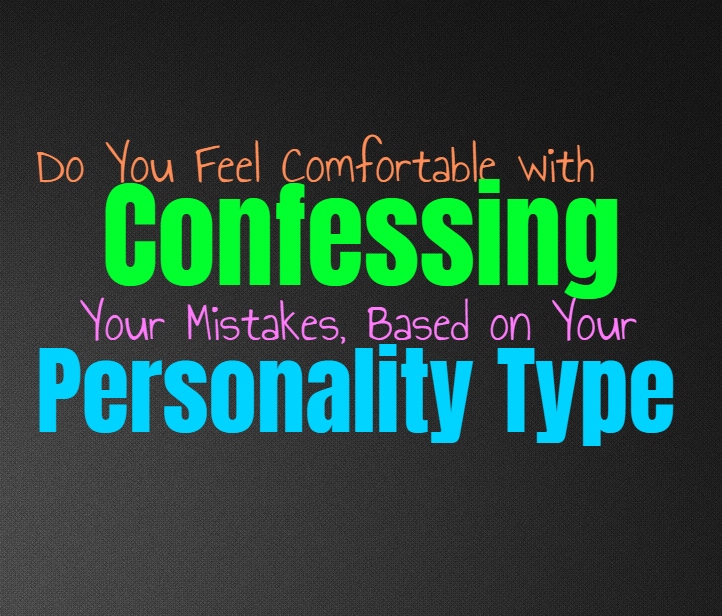 Do You Feel Comfortable with Confessing Your Mistakes, Based on Your Personality Type

While some people believe in being honest even about their mistakes and flaws, while for others this feels unnatural. They have a hard time opening up, and often want to keep things to themselves, especially when it comes to their mistakes. Here is how comfortable you feel with confessing your mistakes, based on your personality type.

INFJs are often afraid of really showing their flaws or mistakes to most people, because they fear being judged or misunderstood. Sharing themselves openly with others and having them respond with rejection, is something that would deeply hurt the INFJs heart. They often keep their distance because of this, and rarely do they feel comfortable confessing their mistakes. They often try to hide any mistakes they make, especially from people they are not especially close to. They do want to find someone they can be completely themselves with, but they wait until they can truly be sure they can trust that person before they show all of themselves.

ENFJs can be afraid of confessing their mistakes or flaws and often want to hide these from others. They have a hard time really feeling exposed in this way, mostly because they are perfectionists. They don’t want people to judge them or have doubts in their strengths and abilities. For the ENFJ showing their mistakes openly is not something they are comfortable with, instead they often do the opposite. This doesn’t come from a place of mischief, ENFJs are simply afraid of being judged or rejected by the people they love.

INFPs often seek to be more open people and don’t feel a strong need to hide their mistakes from others. If they are aware that they have made a mistake, the INFP doesn’t want to pretend to be perfect. They want to work towards being able to confess to their flaws and mistakes, without feeling afraid of the result. INFPs who have matured and become more comfortable with themselves, are definitely more likely to openly confess to their mistakes. The more they self-reflect the more they become at ease with being imperfect.

ENFPs can sometimes struggle with admitting to their mistakes, especially if they feel attacked about it. If they are around people who make them feel bad whenever they do something wrong, the ENFP will put up walls and struggle to really admit to any mistakes they make. ENFPs do however want to be around people who allow them to be imperfect, and feel more comfortable in this type of environment. The more mature and developed ENFP becomes comfortable with themselves, and is not afraid of confessing their mistakes to others.

Confessing their mistakes is not something the INTJ feels comfortable with, even if they are aware of things they might have done wrong. They can be very guarded people and rarely feel like others deserve to see behind their somewhat high walls. They might even feel like others could take advantage of them if they witness any of the INTJs flaws or mistakes. INTJs are also very hard on themselves and don’t like feeling as if they have failed in any way, and so they might struggle with admitting this to themselves even.

ENTJs don’t like making mistakes at all, and so they are not likely to feel comfortable confessing them to others. They want to move forward and find ways to make amends for their failures, and do things better the next time around. ENTJs are definitely hard on themselves and strive to get things perfectly the first time around. If they have made mistakes with something they often want to keep this to themselves, and feel uneasy really opening up to others about it. For the ENTJ this feels far too vulnerable and means people could use this information against them.

INTPs can be uncomfortable with being vulnerable, and often have plenty of walls put up. They won’t find it natural to really expose themselves or their mistakes to most people. They often fear rejection, but INTPs are also fearful that people could use this information against them in the future. They don’t want to put themselves into these situations, and so they often keep their mistakes to themselves. They will certainly spend time analyzing their errors and try to find ways to improve for the future, but they don’t readily confess these things to those around them.

ENTPs don’t really like feeling exposed or vulnerable, but most people won’t recognize this about them. They try to make themselves seem more open than they actually are, when in truth they aren’t completely comfortable with people seeing behind the curtain (insert dirty joke here). ENTPs might be more comfortable confessing their mistakes with someone they trust, and they do often want to feel safe opening up to someone. They are simply aware that some people will use these things against them, and so they do tend to keep their mistakes to themselves.

ISTJs try their hardest to avoid making mistakes, and so openly confessing them can be a bit troubling for the ISTJ. If they need to admit to these mistakes in order to move forward and become more efficient, than the ISTJ will often be capable of doing this. They would much rather find ways to improve themselves, and avoid ever making these mistakes. ISTJs will often attempt to fix whatever mistake they have made, well before anyone else can notice it has occurred. If this happens then they are not at all unhappy with the idea of letting time pass without confessing their mistake to others.

ESTJs are problem solvers, and so they would much rather find ways to fix their mistakes instead of confessing them to others. They don’t like making mistakes in the first place, and can be very hard on themselves when they do. ESTJs try their hardest to get things right the first time around, and so they often scramble to find ways to mend whatever errors have been made. If they can do this without making it obvious to others, they would much rather avoid confessing these mistakes openly.

ISFJs don’t like making mistakes, mostly because they put a lot of pressure on themselves to be successful in their endeavors. For the ISFJ it often feels like they have let others down if they make too many errors, and so they won’t really feel comfortable sharing these with others. They are often more likely to avoid making mistakes in the first place, and will try to fix any errors that have slipped past them. Instead of confessing these things to the people around them, ISFJs simply take it upon themselves to make it right.

ESFJs don’t like making mistakes at all, and will often judge themselves very harshly in these situations. If they have made a mistake the ESFJ often wants to fix it before anyone else discovers what has happened. They often want their loved ones to see them as something close to perfect, and can be afraid of what showing their flaws could mean. They can be afraid of being abandoned or rejected, and so ESFJs do whatever they can to avoid this.

ISTPs usually don’t mind confessing their mistakes to most people, since they aren’t under some impression that perfection is attainable. They don’t mind making a few mistakes on their path, and aren’t afraid of people seeing this. While ISTPs aren’t naturally sharers, they also aren’t afraid of people knowing that they have made mistakes. They simply aren’t likely to really open up to people, mostly because they prefer to keep to themselves most of the time.

ESTPs might be nervous to admit to their mistakes, especially around the people they love. They can confess to smaller mistakes, but anything they are truly self-conscious about can be troublesome for the ESTP. They often appear confident and like they don’t care all that much, but they often care deeply about their loved ones and how they perceive them. They might want to hide some of these mistakes, and certainly won’t feel comfortable confessing them.

ISFPs don’t mind confessing to their mistakes around most people, since they are open and honest. ISFPs strive for sincerity in their actions and words, and don’t want to feel like they are pretending. They realize they cannot be perfect, and so for the ISFP keeping things to themselves feels like they are lying to others. They will likely be fine confessing their mistakes, unless they are around someone who makes them feel awful about it.

ESFPs don’t like being insincere, and so they often prefer to confess their mistakes to others. They don’t want to feel like they need to hide who they are or what they do, and would much rather be open and honest about anything that happens in their lives. ESFPs are happier when they feel comfortable confessing to their doubts, flaws and mistakes. If they are around people who make them feel awful about anything they do wrong, the ESFP will start to lose parts of themselves because they will feel less at ease sharing.