The Importance of Having Evidence to Each Personality Type 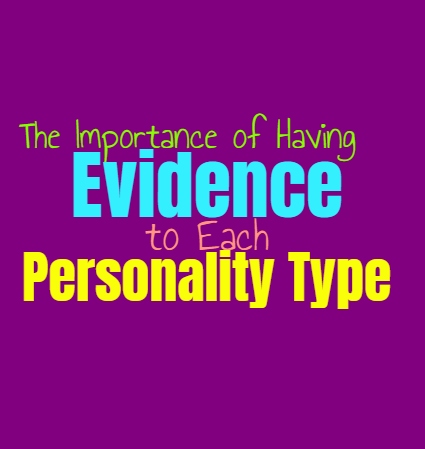 The Importance of Having Evidence to Each Personality Type

For some people having evidence to build their case and back them up is truly important. For others it is more about inspiration and gut feelings and so evidence isn’t always something they can provide. Here is how important having evidence is to you, based on your personality type.

For INFJs evidence is important when they are actively trying to prove a point and make their knowledge known to others. Most of the time they don’t like feeling as if they have to back up their beliefs and understanding, but they are willing to if they must. INFJs do follow their intuition with a lot of things and so in these cases evidence isn’t always an easy thing to put together. When the INFJ is simply going based on research then they don’t mind sharing this evidence and their findings in order to make their point clear.

ENFJs do follow their intuition a lot, which doesn’t always provide them with evidence. When they have done research beforehand they don’t mind showing their evidence in order to prove their point and their knowledge. For the ENFJ it is important to have some sort of proof before moving forward with most things, especially before they will believe someone who is trying to change their minds. ENFJs enjoy evidence to some extent but it isn’t something which is constantly required, since they follow their intuitive knowledge.

INFPs follow their hearts and intuition and so they don’t always have outright evidence for people. They do believe in doing research though and in many cases they enjoy having people present them with facts and evidence. For the INFP it is important to have a combination of both and to live with a sense of balance. While in some situations evidence is valuable to them, they are also capable of following their hearts and intuition which doesn’t always present itself with evidence from the start.

ENFPs certainly enjoy doing research and so for them certain evidence can be truly useful. For them it is important to find balance and in some cases evidence isn’t necessarily vital. It depends on the circumstances and the decisions they are making. If the ENFP is trying to make a choice which needs research and evidence than in this moment it will be truly important for them. Other times they do want to follow their intuition and what feels right, even if there isn’t obvious evidence that they can show to others.

For INTJs evidence is vital with just about everything they do and each decision they make. While they have powerful intuitions, they still enjoy having evidence and facts to back things up. For the INTJ it is important to provide people with plenty of evidence so that they can prove their point and their knowledge without faltering. INTJs also want people to provide them with evidence and facts if they are trying to change the INTJs mind about something.

ENTJs do believe that evidence is important with just about everything they do. They don’t enjoy walking into a situation without plenty of research and evidence to prove their point. When the ENTJ is trying to express their knowledge they want to have proof to what they are saying. ENTJs also don’t like someone trying to change their mind if that person doesn’t have facts and evidence to make their case. ENTJs believe in knowledge and they want to be prepared for everything and anything.

INTPs definitely believe that facts and evidence are important, especially when they are trying to prove a point to someone. INTPs often have plenty of knowledge and evidence in their minds but it can be challenging to express things outwardly. INTPs also follow their intuition towards certain information and for them the process of understanding isn’t always natural to explain to someone else. At the same time INTPs do believe that evidence in order to back things up is truly vital.

ENTPs definitely value evidence, especially when someone is attempting to debate with them. They enjoy having proof and plenty of facts in order to back up their case and their knowledge. When it comes to having a debate ENTPs also want the opposing individual to provide them with plenty of evidence and information in order to make it a valuable interaction. ENTPs do what they must to uncover information and facts, and so for them this is truly important.

ISTJs hold having evidence as something truly important, since they are practical and logical people. For them having proof and records to back everything up, is something which is responsible and wise. ISTJs definitely value evidence and research in their lives, and don’t like doing anything without being sure of their decisions beforehand.

ESTJs absolutely value evidence in just about everything they say and do. They don’t like walking into a situation without having proof to back up their actions and choices. For the ESTJ evidence is a value means of being sure of their path, and in being able to defend themselves if anyone comes against or challenges what they are saying or doing.

ISFJs believe that having evidence is important, especially since it helps them feel sure of their choices. They don’t like walking into something without being sure, since they care about providing for the people they love. For the ISFJ evidence and facts will help them to ensure that they are being responsible and won’t make mistakes along the way. Not everything needs detailed evidence for the ISFJ, but for the most part it can be useful.

ESFJs do value having evidence to back themselves up, especially when they feel like they need to be defensive around certain people. ESFJs don’t like making choices without being sure of what they are doing, mostly because they don’t want to make any mistakes. They care about being able to provide for their loved ones, and so sometimes having evidence and facts before making a decision can help them be sure.

ISTPs do believe in having evidence when they are trying to prove a point, especially when they are debating with someone. They don’t appreciate seeing people spread false information without having any evidence to back up their claims. For the ISTP evidence gives them a solid means of arguing their point and ensuring that people know their knowledge and abilities.

ESTPs definitely believe in facts and having evidence to back up any of their claims and beliefs. They want to be sure about things before expressing their knowledge, and so for them having some sort of evidence is important. ESTPs are complex people who enjoy living in the moment and don’t want to obsess over all the details, but at the same time they believe in spreading true information instead of people who spread falsities.

ISFPs don’t really need evidence in everything they do, simply because they follow their gut with a lot of things in life. For the ISFP having evidence to back everything up can feel a bit pointless and draining. They know what they believe in and this is often connected to their morals and inner beliefs. They want to feel free to make their own choices and follow their hearts, without needing detailed evidence to back them up.

ESFPs don’t require evidence in everything they do, since they believe in following their hearts and inspiration. ESFPs live in the present and because of this they don’t want to constantly search for evidence to back up all of their choices and feelings. Sometimes they believe it is important, especially when they are struggling to trust something. At the same time ESFPs are complex people who live their lives in the present.