Can You Control Your Urges, Based on Your Personality Type 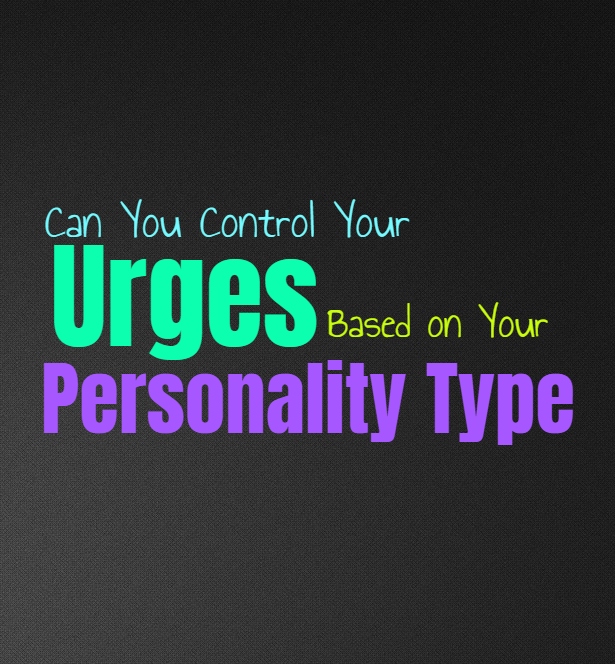 Can You Control Your Urges, Based on Your Personality Type

For some people it can be challenging to control their urges, and so they often act on how they are feeling in the moment. For others it is important to maintain control of these urges, and make choices which they have thought through. Here is how good you are at controlling urges, based on your personality type.

Most of the time INFJs believe in controlling their urges and not simply acting on every whim or feeling. Instead they want to make smart choices and often focus on logic more than people realize. For the INFJ it is important to think things through and be sure they are making the best decision for themselves and their loved ones. They often analyze their actions and don’t like simply acting on urges. There are times when the INFJ can feel a bit more inclined to follow urges, but it is often under times of extreme stress.

ENFJs definitely believe in controlling their urges, since they don’t like risk-taking behavior. They care about doing the right thing, and so they want to take time to process information before moving forward. For the ENFJ it is important to think about their feelings and analyze why they are experiencing certain urges. They do want to live passionate lives and so there are times when they are more inclined to follow through with certain urges, but only when they know it won’t be harmful to anyone they care for.

INFPs do sometimes follow their urges, since they don’t like having to feel restrained. Sometimes the INFP will go with their heart and do what feels right, even if it doesn’t make sense to others. They believe in living their lives with passion and so this can often mean following urges and inspiration. INFPs don’t constantly go after whims and urges, especially ones which they know could harm someone else or be wrong in some ways.

ENFPs do sometimes struggle to control their urges, since they follow their hearts and seek out what inspires them most. They sometimes follow their emotions when it comes to making choices, and this can lead to following urges as well. When something feels right for the ENFP they will go after it, even if it comes from an urge that others might not agree with. ENFPs believe in doing the right thing and so they don’t simply follow every urge they experience, only the ones which feel right for them.

INTJs don’t really struggle to control their urges, since they believe in making the smartest choices. They don’t allow their whims to control them, instead they believe in processing things before acting on them. INTJs are logical and factual people, and so for them simply following urges is a bit reckless and even foolish. They want to think things through and be sure to make choices which are smart and efficient.

ENTJs don’t want to allow urges or emotions to control their actions, instead they believe in making the smart decisions. If the ENTJ experiences some sort of urges, they believe in taking a step back and analyzing these feelings first. Before making choices ENTJs want to analyze and be sure they are doing the right and efficient thing. For ENTJs urges shouldn’t just be followed, so they do their best to control them and focus on getting things done the efficient and intelligent way.

INTPs don’t usually just follow urges, especially ones which seem illogical. INTPs aren’t reckless people instead they believe in following the facts of a situation. While they do believe in controlling their urges, but they do have moments where they want to be a bit more spontaneous. When the INTP does feel like doing things more in the moment, that doesn’t mean they lack a sense of control and awareness of their actions.

ENTPs are logical people and so while they can seem a bit reckless and spontaneous, that doesn’t mean they are incapable of controlling their urges. They like to do the smart thing and when they seem like they are taking risks, they are often calculated risks. ENTPs do jump into new things but this is because they want to learn from these experiences. They don’t simply follow their whims and ruges, instead they process information and analyze the choices they are making.

ISTJs definitely know how to control their urges and believe in making wise decisions. They don’t simply go after what feels inspiring in the moment, instead they take their time to process information and make the most logical choices. For ISTJs it is important to plan things out and really think about their actions before committing to anything. They don’t have much respect for reckless behaviors, instead they try their best to be patient.

ESTJs don’t believe in jumping into anything without really thinking it through first. For them it is foolish to allow their urges to control them, and so they try to avoid this. ESTJs take their time to plan things out and really be sure they are making efficient and smart decisions. ESTJs are definitely capable of controlling their urges, and will do their best to really process all the facts before simply following what feels right in the moment.

ISFJs believe in controlling their urges and work hard to make the right decisions. For the ISFJ simply following urges is irresponsible and can harm the ones they love. They value making smart choices and really thinking things through before jumping into something. ISFJs are responsible people and so following momentary urges feels reckless and foolish for them. ISFJs want to be sure their actions are the right ones, especially for the sake of their loved ones.

ESFJs are often great at controlling their urges, especially when their loved ones are at risk. They believe in being responsible and making choices based on what is practical and wise. ESFJs care deeply about protecting those around them, and so for them acting on impulse and simply following their urges is both irresponsible and selfish. They do their best to maintain a sense of control of their lives and over their own urges.

ISTPs aren’t really great at controlling their urges, since most of the time they don’t want to. ISTPs enjoy following their urges and going after what excites and inspires them in the moment. For them it is more rewarding to act on how they feel and what they want, and simply deal with the ramifications later on. For the ISTP it is important to do what excites them, and to live in the present.

ESTPs aren’t people who believe in controlling all of their urges, even though they are logical people. They simply enjoy living in the moment and want to seek out excitement. When they are passionate about something and excited, they want to go after it without restraint. Sometimes the ESTP will go after adventure even if they know it might seem a bit reckless, they simply deal with the ramifications after it is over.

ISFPs don’t like feeling the need to restrain themselves and their urges, and so they follow what inspires them in the moment. ISFPs are often led by their emotions, and believe in going after what they want. Instead of trying to control these urges, the ISFP wants to experience them and work to understand themselves better through this process.

ESFPs aren’t really good at controlling urges, instead they follow them. They want to experience excitement and passion in their lives, instead of constantly trying to restrain themselves. If the ESFP is truly excited about something they want to dive in, instead of trying to control themselves and hold back. They follow what feels right in the present moment, and so for them controlling urges isn’t all that important.