Are You Someone People Find Trustworthy, Based on Your Personality Type 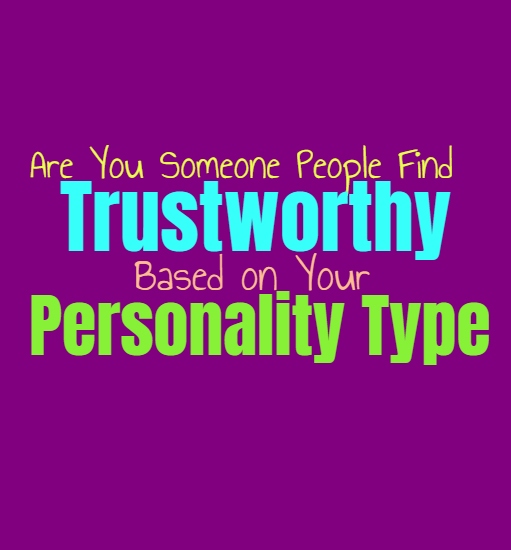 Are You Someone People Find Trustworthy, Based on Your Personality Type

Some people have a natural way of making others comfortable and so people will often confide in them easily. For others first impressions don’t really leave people opening up to them with ease. Here is how trustworthy people find you to be, based on your personality type.

INFJs are often the people that others can confide in, and they feel comfortable sharing themselves openly with the INFJ. This is because INFJs have a strong sense of empathy and don’t like appearing judgemental towards others. People can often sense this high level of understanding and compassion which emanates from the INFJ. They enjoy being someone that others trust, and this is something which doesn’t take much for them to gain from those around them.

ENFJs often find that new people confide in them and trust them without even knowing the ENFJ that well. They enjoy being someone that others can come to, and they are often good listeners. Their sense of compassion and empathy is something which naturally brings people to them. Most of the time at first glance the ENFJ is someone who others find extremely trustworthy and so they want to open up and share their secrets. ENFJs also have a way of making people feel understood and completely appreciated, which helps increase trust in them.

INFPs are often seen as trustworthy and honest people, and others enjoy sharing with them. With INFPs people often feel like they can share who they are openly without this information being shared elsewhere. Even if the INFP doesn’t agree with this person’s choices, there is still a sense of trust within them and an openness which helps people feel more comfortable around the INFP. People do often see them as trustworthy and someone they can turn to if they need comfort and understanding.

ENFPs might not be seen as trustworthy initially, since they are outgoing and sometimes enjoy bouncing from one place to another. The fact that they might seem scattered at first can make some people feel a bit uneasy. ENFPs are often trustworthy people who will do anything for the ones they love, and people who are close to the ENFP definitely know this about them. This part of their personality isn’t always recognized at first glance though, and so some people might not feel as ready to open up to them.

INTJs can appear a bit stern and standoffish to newcomers, and so they might not appear like someone they can open up to. This doesn’t mean people don’t trust the INTJ to be reliable, they simple might not feel like they can share their feelings and fears with the INTJ. There can sometimes be a fear that they might be cold or that they just don’t want to listen to what people have to say. For the people close to the INTJ they are seen as trustworthy and reliable friends and comparisons, but first impressions might make them a bit intimidating.

ENTJs can sometimes appear intimidating at first and so some people might not feel like they can open up to them. ENTJs aren’t necessarily the people that make others feel like they can confide in them with their feelings and secrets. This isn’t because they aren’t trustworthy, it’s mostly because they can appear intimidating to people who don’t know them. For those who know the ENTJ and care for them, they are extremely trustworthy and reliable companions. ENTJs will do just about anything to defend the ones they care for, this just isn’t something people always know right away.

While INTPs are often very trustworthy people, this isn’t necessarily how people see them at first glance. They aren’t necessarily the types that make others confide in them the moment they meet. This is because INTPs might appear a little bit cold or standoffish, simply because they keep a lot of their thoughts and emotions to themselves. INTPs don’t really express things openly, and so this might make it so people feel uneasy confiding in them when they first meet the INTP.

ENTPs are outgoing and friendly people, and so they do have a way of making others feel comfortable around them. If the ENTP does want someone to trust them and open up, they are usually good at gaining their trust. It depends on the mood they are in and the way they are expressing themselves in that moment. ENTPs can certainly make themselves more approachable and so this causes people to confide in them much more openly.

ISTJs are often seen as a bit standoffish at first, but that doesn’t mean they aren’t trustworthy. They are the type of people who stand by their word and don’t like being someone who changes their mind last minute. This makes the ISTJ extremely trustworthy and reliable, but they aren’t always the person that others confide in when they just meet. ISTJs might not seem like the most open or social people, and so while they are easy for others to trust, most people won’t open up to the ISTJ right away.

ESTJs are friendly and trustworthy people, but at first glance they can seem a bit cold to others. Their focus on efficiency can be intimidating and so new people don’t always find themselves confiding in the ESTJ. While they will do anything for their loved ones, ESTJs don’t focus much on feelings or sharing their emotions. This can make it so people don’t want to open up and share their feelings to the ESTJ when they first meet.

ISFJs are often seen as trustworthy people right away, and so this is why they often get people opening up to them. Their sense of warmth and compassion makes it so that even strangers feel comfortable sharing with the ISFJ. This is because they have a way of making others feel comfortable and at ease around them. ISFJs care about being supportive of others and often don’t mind being someone that strangers confide in.

ESFJs are definitely seen compassionate people and so even strangers will confide in them. ESFJs have a way of making others feel understood and often show themselves to be trustworthy. They often have plenty of strangers constantly confiding in and opening up to the ESFJ. This is because they make people feel comfortable and don’t present themselves as someone who will judge. Most people feel safe sharing with the ESFJ because they are compassionate and warm people.

ISTPs have an often mysterious demeanor, which might make it difficult for new people to trust them immediately. They have a way of distancing themselves and so they aren’t always the people that others want to confide in when they first meet. While people do often search for attention from the ISTP, they might not feel as if they can confide in them since ISTPs aren’t the most open people.

ESTPs might not always be someone that others trust immediately, since they are often mysterious people. ESTPs can often bounce around and this adventurous nature can sometimes make strangers feel uneasy confiding in them. While ESTPs enjoy being someone others can come to, they do sometimes seem like they won’t be great at keeping secrets since they live so much in the present moment.

ISFPs are often warm and understanding people, but strangers might not notice this. They are people who enjoy being supportive of their loved ones, but they sometimes seem a bit scattered at first glance. Strangers might not know if they can confide in the ISFP, since they have a way of bouncing around and can seem a bit distracted at times.

ESFPs are warm and loving people, but they sometimes can seem a bit scattered. The fact that they enjoy living in the present, might make people nervous about confiding in them. They aren’t always seen as trustworthy people at first glance, simply because of their distracted and sometimes wild personalities. While ESFPs would do anything for their loved ones, they do sometimes share information without meaning to.