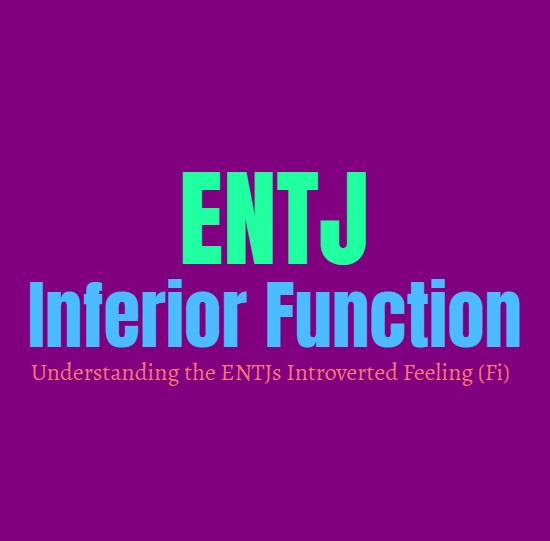 The ENTJs inferior function is their introverted feeling or Fi, which is primarily focused on internal ideals and a sense of morals. This function is driven by an internal moral compass, which guides the individual and helps them make choices based on what they believe is right and good. While types who use this as their dominant function become very focused on their feelings and beliefs, the ENTJ doesn’t respond quite the same way. Since this is their inferior function they utilize it in much different ways than someone using Fi as their dominant function would. Most people can assume that ENTJs don’t use introverted feeling at all, but they simply use it in different and often more subconscious ways. This is why it is important to understand how a functions stack works, and how each function behaves dependent upon where it is in your placement.

What Is Introverted Feeling (Fi)

Introverted feeling (Fi) is focused on internal feelings and belief systems. This is where the individual with strong Fi will get their sense of right and wrong, and helps them make choices. Their own sense of values is deeply important to them, and this is why they want to uphold this sense of independence in their beliefs. They are often searching for something they want from life, wanting to be someone who can make a difference in the world in a positive way. Being true to themselves and who they are is something which strong Fi users value immensely. They don’t want to allow other people to sway their choices, or force them to change their views. This is why they can be somewhat stubborn when it comes to what is moral and right to them, and don’t like when someone attempts to pressure them. Their Fi is based on their own personal feelings and values, and filters the world around them through this lens. Instead of basing things on what other people feel or what society believes, the Fi user judges based on their own internal set of morals and ideals. While types like the ENTJ utilize Fi, it isn’t in quite the same way as INFPs or ISFPs. They do have strong inner values and beliefs, but they don’t allow inner emotions or sense of morals to override their desire to be efficient and make things happen.

The Role of the ENTJs Inferior Function

While ENTJs often make instant choices based on their dominant extraverted thinking function, wanting to get things done and be as efficient as possible. ENTJs can make decisions rather quickly, especially when they have a path or clear direction they want to follow. This is something which often overrides their use of introverted feeling, but that doesn’t mean this function doesn’t have a purpose or come out to play in certain moments. When the ENTJ does take time to process their choices and filter it through their Fi, this often comes from a more gut instinct. They can “feel” like something just isn’t right, or like they need to consider different angles before moving forward. When this happens the ENTJ is likely focused on their internal values, and is considering if they should be more open to the feelings of others and how they are affecting the world on a larger scale. This is what helps the ENTJ adjust some of their life goals in order to ensure they are really doing something which helps or affects people in a meaningful way. This function also helps the ENTJ when it comes to relationships, and what they want from a partner. Instead of being cold to their loved ones needs, their Fi can help them to consider their emotions and desires as well. This isn’t something the ENTJ can focus on for long periods of time, but it is still important to them and their sense of loyalty to the people around them.

When the ENTJ is under serious stress or they have applied too much pressure and focus onto their dominant function, they can go into their grip. When this occurs the ENTJ drawn to their inferior function, and will focus far too much on bringing this out. The ENTJ can start to analyze how they “feel” about something and if they are a good person or not. They have doubts in themselves and their intentions, constantly trying to find a sense of inner validation. They might struggle to process their feelings about a person, and can find themselves having unusual outbursts. The ENTJ wants to figure out how things will line up with their own set of values, but this becomes their main focus and can end up rather skewed. They start to feel like they are making mistakes or they are causing pain to those around them by making immoral choices. Alternatively, the ENTJ might start to judge the moral choices of others, and have a hard time understanding where people’s intentions are coming from.