How You Handle Feeling Heartsick, Based on Your Personality Type 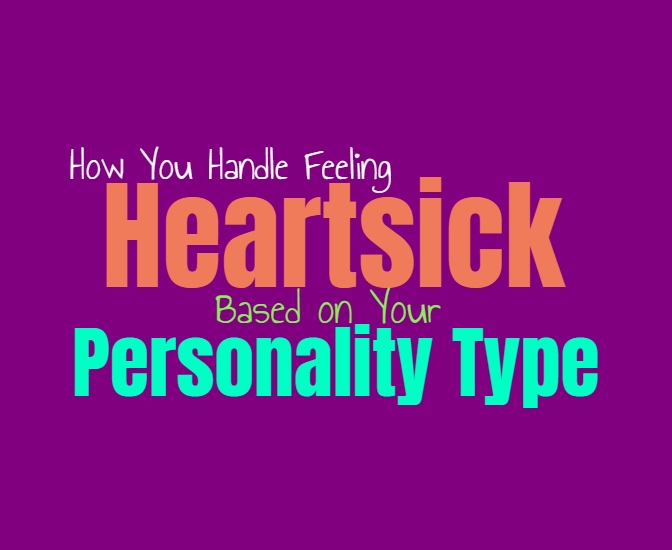 How You Handle Feeling Heartsick, Based on Your Personality Type

Most of us have experienced that heartsick feeling, either from missing someone or just feeling completely forlorn about life and and our current situation. It isn’t an easy feeling, but most people have to endure it at one time or another. Here is how you handle and respond to feeling a bit heartsick, based on your personality type.

INFJs are very internal people, and so they do retreat a bit when they are feeling heartsick. They find themselves needing more time alone, and might become a bit distant from most people. They have a hard time wanting to come outside of their own inner world, since it can bring them more comfort than having to face the world around them. Sometimes turning a loved one they trust can be the best way to quell this heartsick feeling, but it can be hard for the INFJ to make this first move. They often need someone who is willing to show them they are there, to give them a sense of support when they are feeling down about something.

When ENFJs feeling heartsick from losing someone or some connection, they can try to find ways to push forward. They often struggle to show their emotions to others, since they don’t want to be a burden. This causes the ENFJ to sometimes push themselves too hard, and forget to really grieve or experience what they have lost. For the ENFJ it becomes challenging to really accept this pain, since they don’t want to feel like they are failing or being weak around others. ENFJs do often need to express themselves and their sadness after a while, but it is hard for them to feel open enough to do this.

INFPs don’t like to ignore their emotions, especially if they are feeling heartsick. If they have lost someone or are separated from a love of theirs, they will need to really experience this loss. For INFPs simply ignoring their feelings or trying to bury them, is not natural and leaves them feeling even more miserable. They often need time to themselves, possibly to wallow and just stew in these emotions so that they can really process them. While they feel things very deeply and this can be challenging sometimes, they need to give themselves space and time to really understand themselves.

ENFPs feel things very deeply, and so when they experience loss or separation from love, they definitely feel heartsick. For ENFPs this is something they need to experience, but they might have a desire to distract themselves at times. They have so many thoughts and emotions that is becomes difficult for them to process everything the way others might. ENFPs might try to find distractions or ways to avoid really experiencing the depth of their sadness, but eventually they need to allow themselves to feel it or they become truly stressed and overwhelmed.

INTJs often try to bury their emotions, but being heartsick is often on another level that they can’t quite ignore. They simply struggle to really face these inner feelings and often want to find ways to focus on facts instead of feelings. They don’t like to allow their emotions to stand in their way or hold them back from things that are important to them. When the INTJ has no choice but to experience their feelings of being heartsick, they often want to do this completely alone. They need to give themselves space away from others to process things, and so being around people will only make it more challenging.

ENTJs who are heartsick often try to remain distracted or focusing on getting things done. They have a hard time really focusing on their emotions and an even harder time understanding them. For the ENTJ it takes a while before they realize how to cope with their emotions and really work through them. Once they do reach this point they do their best to try and understand what they are feeling, but for ENTJs it is often more rewarding to be around someone they can trust. They might need to vent and get out all of these emotions, especially if it is about something more serious.

INTPs are often more factual people, and so they try their best to focus on understanding things and not just feeling them. While they do believe in using logic to understand things, INTPs also feel things very deeply. They might have a hard time really admitting to their feelings or sharing them with others, but that doesn’t mean they don’t feel these things. When the INTP feels heartsick they often retreat inward and can seem a bit reclusive. They also might have moments where they try to appear more social, as a way to seek connections which might help them feel better.

ENTPs can sometimes struggle when it comes to coping with their emotions, and so they try to find ways to distract themselves or deflect. ENTPs struggle to really understand their feelings most of the time and so they prefer to focus on facts and logic. While they do have times when they are truly heartsick, sharing this with others it challenging for them. ENTPs might find themselves retreating more often, or they might become a bit impatient which isn’t necessarily normal for them.

ISTJs aren’t really good at processing their emotions and so they often try to find ways to avoid them. They can bottle up these emotions so they don’t have to feel like they are holding themselves back. ISTJs who are feeling heartsick often find themselves wanting to be alone even more often than usual, and need to really find time to themselves to recharge. While they might retreat, they do need to have people around them who show their comfort and support or else they will bottle things up for too long.

ESTJs sometimes feel like their emotions are signs of weakness, and they don’t want to show them to others. While they might feel this way, they can struggle to really hold things back when they are feeling truly heartsick from some sort of loss. When the ESTJ feels this way they actually do need people to show their love and support, but they won’t ask for this. ESTJs have a hard time leaning on others, and so they need people who are willing to make this first move for them.

ISFJs who are feeling heartsick might find themselves drawing closer to their loved ones for comfort. They won’t necessarily open up about their feelings because they want to appear strong, but they still need people around them to feel connected to. They might find themselves becoming a bit smothering, but not intentionally so. They just need to feel close to their loved ones in order to feel about about their sadness and loss.

When ESFJs feel heartsick they might attempt to focus on working hard and getting things done to distract themselves. They don’t want to appear like they are weak and might have a hard time really showing their emotions to others. This is because ESFJs don’t want to burden their loved ones, and feeling pity from them can sometimes make the situation worse. While ESFJs might try to bury these emotions, there will come a time when they manifest and cause them to become a bit short-tempered with those around them.

ISTPs who feel heartsick might have a hard time really accepting their own emotions. They don’t like allowing these feelings to hold them back and might struggle to really understand them as well. When the ISTP is feeling heartsick they often resort to diving into new experiences and might want to find something thrilling to distract them. Distractions often help the ISTP overcome those negative feelings, and so they want to find ways to keep their minds off of this.

When the ESTP feels heartsick they often turn to the loved ones they can trust, in hopes of having someone they can vent to. They enjoy having people in their lives they can trust and sometimes they just need to get these feelings out. For the ESTPs it can be hard to really work through these feelings, and so they might eventually resort to somewhat reckless behavior. ESTPs need changes in their life in order to feel some sort of distraction from feeling so heartsick and sad.

ISFPs who are feeling heartsick really need to experience and accept their own emotions. It is important for them to dive into their feelings instead of simply trying to push them aside. They often need to have someone in their life who they can connect with and share their pain with. ISFPs don’t like neglecting their emotions and so when they are feeling heartsick it is important for them to work through these feelings in order to understand what they are going through.

When the ESFP is feeling heartsick they often need to surround themselves with their loved ones. They need to be around people they care for, people who can bring them a sense of comfort. ESFPs don’t like feeling alone or disconnected, especially when they are feeling deeply heartsick. They need to have the people they love around them, and want to feel a sense of connection from them.