Important Things To Know About the ENFP Female 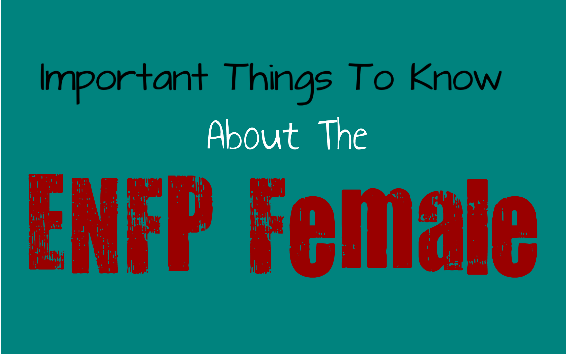 Important Things To Know About the ENFP Female

ENFP females are charismatic and energetic individuals, but there is much more to them than just a bubbly personality. There is an ocean of depth within the ENFP, making them complex and interesting people. Here are a few things that you should know about the ENFP female.

They Have Strong Values

ENFP females often have very strong internal morals, which they follow with intent. They do not enjoy other people attempting to control them, and will become very frustrated if someone tries to coerce them in any way. ENFP women are often very independent, and want to be allowed to make their own decisions. They know what they believe is right, and will fight for those beliefs. When it comes time to stand up for themselves, they are rarely afraid to do so. They might struggle with family members or people closest to them though, and may take some times to gain the strength to stand against those people. They have big hearts, but they aren’t afraid to push back when others attempt to walk all over them.

ENFPs simply dislike being controlling, and will often sense when someone is trying to manipulate them. They give a lot to others, and because of this they do not like being taken advantage of in any way. They will often sense when someone is trying to manipulate them, and will react very strongly to this. ENFPs also dislike attempting to control others, and would much prefer to give someone their freedom. This is especially true in romantic relationships- the ENFP woman will often allow her partner to do as they please without attempting to control them. This makes them wonderful companions, since they want a nice combination of space and togetherness. They enjoy being around their loved ones, but do not want to smother them when it comes to their actions. If the person they care for tells them that something is important, they will certainly give them space to do whatever they need.

They Are Fun, But Also Intelligent

ENFP females are often seen as fun and playful individuals, and this is entirely true. They enjoy laughter very much, and want to make the most out of life. They are often seen trying to see the positive in many situations, and will often be great at helping their friends feel better. ENFPs are fun and warm people, but there is much more to them than that. They are also very intelligent individuals, with a hunger for knowledge. They often have a million thoughts running their minds at once, and are extremely creative individuals. People are usually surprised when they realize just how much knowledge the ENFP female can possess. Even if she enjoys being silly from time to time, she also knows how to be serious. This ability to find the right balance between logical and emotional, makes ENFP women very surprising- and honestly the fantasy of many suitors.

One of the most attractive qualities to an ENFP female, is someone who is intelligent and eager to study the world around them. They would much prefer someone with a powerful mind, than someone who has a smooth personality. They might even enjoy people who are awkward in a lot of ways, especially if that person possesses a beautiful intellect.

They Go After What They Want

ENFP women are not afraid to go after what they want. They are brave individuals, who are willing to take chances if they feel it is the right thing to do. This can sometimes get them into trouble, but they are perfectly capable of finding their own way out. They can sometimes be seen as completely unafraid, but that is not entirely true. ENFP women simply realize that in order to remain true to themselves, they have to be upfront about what they want. They will often be willing to make the first move as far as romantic relationships go. They might not be the one to make a completely bold move, but they will find a way to express their interests pretty clearly. ENFP women are excellent at making their intentions known, without having to really say anything.

They Have an Awkward Side

ENFP women are usually very charismatic and likable, but they also have an awkward side to their personality. They might have moments where they say something completely surprising to others, which comes across a bit awkward. This usually is because their minds are going faster than people understand, causing them to blurt out something that seems unrelated to the topic when in truth it is more related than those people realize.

ENFPs love exploring new possibilities, which often leads them to discover new and unusual hobbies. This can cause the ENFP female to be interested in certain things that might be a bit more on the “nerdy” side. Their interests might range from more “girly” things like scrapbooking, all the way to something like video games. They do not enjoy being stuck in one thing, and dislike being put into a box by other people. Because of this desire to explore, ENFP women are often interested in many different topics. This can sometimes cause them to appear more nerdy or awkward, but they are perfectly okay with that. They usually enjoy the awkward side to their personality, and will embrace those parts of themselves.

They Love To Laugh

ENFPs enjoy laughter and silliness, which makes them excellent entertainers. They might not always want to be the center of attention, but it often ends up that way. Their playful personality’s make others happy to be around them, and even brings other people together. ENFPs enjoy teasing the people they care about the most, and will often poke fun in a completely harmless way. They simply do not want to take life too seriously, and know exactly how to make the most out of any situation.

ENFP women are strong, spirited and warm individuals. Their inner minds are rich and beautiful, but not everyone is lucky enough to glimpse inside. ENFPs are often seen as the most open people out there, but they only truly open up to a lucky few. Getting to know an ENFP woman might be challenging, but it is worth the effort.

22 Reasons Why You are an ENFP

How To Fall Completely In Love With An ENFP