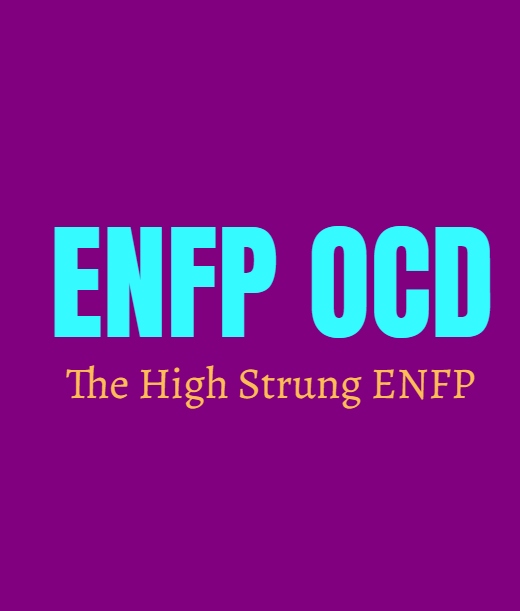 ENFPs have very active inner minds, and this can certainly cause them to exhibit OCD-like behaviors. They have such active thoughts, ones which seem to race in different directions and can be hard to really keep track of at times. ENFPs bounce around from different things, always wanting to keep busy and keep themselves distracted. They might focus on their inner emotions and their intense curiosity, but ENFPs also enjoy learning and analyzing information. This combination can actually be part of what causes them to express certain behaviors which can appear a bit obsessive and even cause them to seem high strung.

ENFPs have very active inner minds, but this can be something which carries them off in different directions. They don’t always find it easy to remain still, and can become a bit obsessive over certain information. Once the ENFP becomes excited about something they don’t want to drop it, instead they dive into this subject and want to learn as much as they can about it. Their minds are so capable of absorbing information and they really enjoy being able to learn and grow. This is something which can seem a bit obsessive, but it doesn’t tend to be be to an extreme degree. ENFPs bounce around from one thing to the next and can actually become bored with things fairly easily.

ENFPs do have minds which are extremely caught up in analyzing and this can get them stuck in an analyzing cycle. When the ENFP becomes so caught up in analyzing and overthinking things, they can become trapped inside of these thoughts. While ENFPs are often seen as outgoing and social people, they aren’t always this way. When they do become caught up in their analysis though, the ENFP can find themselves drawn to their extraverted thinking function which isn’t quite as natural for them. Instead of turning to their natural extraverted intuition or their introverted feeling for answers, the ENFP gets caught up in facts and smaller details. When this happens they certainly do start to exhibit obsessive behaviors. This is when the ENFP becomes caught up in trying to analyze and focus on the details rather than the bigger picture. They might start to obsess about their futures and the people around them. They want to be sure that their inner morals are guiding them in the right direction, and might start to lose sight of that. Ultimately when the ENFP gets stuck in their shadow is often when they can show these obsessive compulsive traits. They start to doubt the things they would normally trust and rely on, and this can create them to obsess about those details they would not normally worry about. Since they have such active minds the ENFP can sometimes allow this to carry them off, and that doesn’t always drive their thoughts into the most positive of places. When the ENFP starts to get caught up in this doubt they can certainly experience thoughts which feel a bit intrusive. This is something which is likely to happen to the younger ENFP, when they are still trying to figure out their path and their own boundaries. When they get caught up in those doubts they can certainly start to obsess about details which would normally not be important or useful for the ENFP and how they think.

The ENFP might worry a lot about what others think when they are younger, and this can become a bit obsessive. This can cause the ENFP a lot of stress in their lives, while most people won’t even know this about them. They are often good at shielding these emotions from others, but it is something which can be deeply troubling for them and cause them to obsess over this. It can certainly be something which overwhelms them and even seems to reach the levels of OCD traits.

It is important for the ENFP to connect with their introverted feeling function, which helps guide them and gives them a sense of direction. Without this connection to their own personal morals and beliefs, the ENFP can become so caught up in what other people think and believe. They really need to strengthen this part of themselves in order to trust in themselves and escape that obsessive behavior which can overwhelm them. Finding this in themselves is actually more important for the ENFP, as their struggle comes from not trusting in the functions which are useful to them. They also need to focus on exploring new ideas, rather than getting caught up in analyzing the smaller details which can be overwhelming. Sometimes jumping into a new project which keeps them moving, can actually be very rewarding for them.