How Each Personality Type Responds to Being Vulnerable 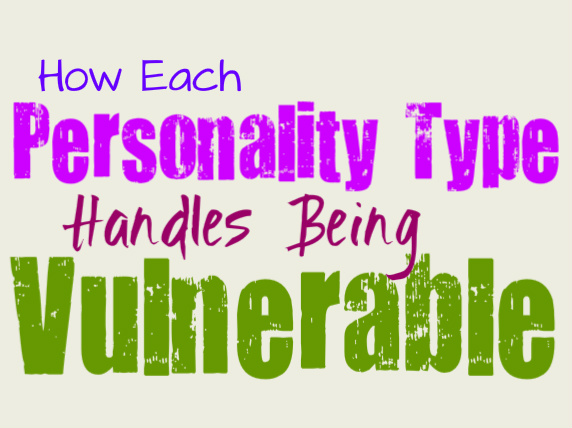 How Each Personality Type Responds to Being Vulnerable

Being vulnerable can be a rather scary thing, especially for people with trust issues. Here is how each personality type responds to being vulnerable.

INFJs often struggle with being vulnerable, and can be somewhat defensive of their hearts. They have likely experienced negative people in their lives, which has caused them to be afraid of getting hurt. INFJs simply do not like opening up and being vulnerable with people, and might struggle with trust. If they feel they have found someone they can trust, then the INFJ will begin to peel back their layers in order to reveal themselves to that person. It often takes time and happens rather slowly as the trust begin to grow. INFJs can often be guarded simply because they have been hurt in the past. They appear rather hard on the outside, but in truth they have tender hearts that can easily be broken.

ENFJs often attempt to hide their vulnerabilities from others, for fear of being judged. They don’t want people to see negative parts of them, and ultimately run away because of it. ENFJs prefer to keep their deeper intentions hidden from people, for fear of being abandoned or hurt. They are social creatures, who often appear much more open than they actually are. They have a natural ability to make others think they are being vulnerable, when really they are not. ENFJs are only open with people they can truly trust, and might take some time to actually find those special people.

INFPs often struggle with being vulnerable, and this is likely because they have been hurt in the past. They can show certain parts of themselves, without being afraid of others reactions. The INFP likely has certain deeper parts to their personality which they are afraid to expose to others. These secrets remain hidden until the INFP discovers someone who they feel completely safe with. That person will likely be lucky enough to experience the depths of the INFPs soul in a special and exciting way. They simply are picky about who they let in, and do not feel safe exposing themselves to everyone.

ENFPs often appear to wear their hearts on their sleeves, but it is actually more difficult for them than it seems. They struggle when they feel overly exposed, and often fear getting hurt by others. When the ENFP meets someone they feel comfortable with, they will begin to open up much more freely. They might have a hard to closing off their emotions, and will be more expressive than they usually are. ENFPs are open and giving people, which makes it feel natural for them to be vulnerable with people they care for. Strangers and their loved are, are entirely different experiences for the ENFP though. They will be much less vulnerable with strangers, and will likely only open up to loved ones.

INTJs are not naturally vulnerable people, and are often seen as rather stoic. They often keep their feelings bottled up, and don’t even expose them to themselves. INTJs simply prefer to focus on logic and facts, and often avoid emotions and vulnerability. INTJs might feel exposed if they are in a situation where they do not know all of the information at hand, and will likely dislike this feeling greatly. INTJs prefer to prepare themselves for most situations, and because of this they are constantly researching and learning about everything. INTJs avoid vulnerability in most cases and prefer to keep themselves closed off from others. They will be more capable of opening up to someone they trust, but this is a rather hard thing for the INTJ to find.

ENTJs are outgoing and driven individuals, who enjoy socializing and getting to know people. ENTJs naturally gregarious personalities make them appear much more open than they actually are. ENTJs often avoid being too vulnerable with most people, and do not feel comfortable expressing their emotions. They struggle to find people they can trust, but will be eager to connect with people who are sincere and upfront. ENTJs can struggle with being vulnerable, and will open up slowly over time. They are usually very guarded people, simply because they have witnessed people react negatively to openness. They know that many people can use your personal vulnerabilities against you, so the ENTJ would rather keep those things to themselves most of the time.

INTPs prefer to keep to themselves most of the time, and truly dislike feeling vulnerable. They are often fearful that people will be judgmental or negative towards them, so they simply avoid letting those people in. They prefer to keep a safe distance, and do not expose themselves too much to others. INTPs certainly want to feel comfortable being vulnerable with someone, but they rarely experience people who they feel they can trust. Because of their closed off nature, INTPs might struggle to be vulnerable even when they reach a point where they want to be. They simply realize that most people will hurt them if they open up, even if those people do not intend to. INTPs want to keep their guard up, in order to keep themselves moving forward.

ENTPs are often very anxious when it comes to vulnerability, and prefer to keep most things to themselves. They are outgoing people, and sometimes this causes them to appear much more open than they actually are. When it comes to their true feelings and goals, ENTPs can often keep these things hidden from others. They do not open up easily, and simply do not trust most people enough to feel comfortable exposing themselves. ENTPs as they get older will likely become more at ease with vulnerability, and will be better at figuring out who they can trust. When the ENTP knows that someone is trustworthy, they will feel more at ease exposing parts of themselves to that person.

ISTJs often prefer to keep to themselves, which can cause them to dislike being vulnerable with others. They do not want people to view them as weak, and will often avoid letting people too far in. ISTJs simply do not want to expose themselves to most people, and prefer to keep these parts of themselves quiet. They are not very open individuals, and are often much more internal and independent. ISTJs will open up to people they trust, but this is usually close family or a romantic partner. They will struggle to constantly express emotions though, and will do this very rarely. ISTJs usually do not see a purpose to being overly open with people, so this just doesn’t come naturally to them.

ESTJs rarely feel comfortable with exposing their vulnerabilities to others. They often avoid letting people see parts of themselves, and do not want to let them in too much. ESTJs have likely experienced hurt when they are too open with people, and so they want to avoid feeling this way again. They prefer to appear strong and capable, and being vulnerable can make them appear weak to others. This guard is often up, and can even be hard for loved ones to break through. ESTJs will only feel comfortable sharing their emotions with someone they trust deeply, and will often do it with great hesitancy.

ISFJs are rather independent people, and prefer keeping their thoughts and feelings quiet most of the time. They are more focused on their loved ones, and because of this they often put their own emotions aside. ISFJs might feel guilty if they are too open about their feelings, and fear that they are being a burden to others. ISFJs prefer to focus on the needs and emotions of others, and because of this they are rarely vulnerable with others. When the ISFJ finds someone they can trust and admire, they will likely begin opening up to this person much more freely. The ISFJ will be more open if they feel like this is what their loved ones truly want from them.

ESFJs are often seen as the type of people who wear their heart on their sleeve, but this isn’t entirely true. They are open with the people they love and trust, but often struggle to get to that point. ESFJs can often attempt to appear perfect, and try hard not to make mistakes. They want their loved ones to be proud of them, so the ESFJ might hide their vulnerabilities because of this. Being vulnerable often means exposing weaknesses, and ESFJs would prefer to seem strong to their loved ones. They do not want the people in their lives to view them as incapable, so they will often hold back much of their inner thoughts and emotions. As they get older, the ESFJ will likely develop a stronger self-awareness, and will become more at ease with being vulnerable.

ISTPs are not naturally vulnerable people, and are much more comfortable by themselves. They dislike feeling exposed, and often keep their deepest thoughts and feelings to themselves. ISTPs simply prefer to keep to themselves, since they are very independent individuals. They are not usually afraid of getting hurt, they simply do not feel the need to express themselves to others. They might even struggle to be open with their loved ones, and will take a lot of time and patience to truly express their emotions.

ESTPs often dislike being vulnerable with most people, but are very open with their loved ones. If the ESTP cares about someone very deeply, they will likely express their emotions and thoughts to those people. They usually do not have a long list of people they trust, but save this for just a few select individuals. When the ESTP is comfortable with someone, they likely have a hard time holding back their feelings and thoughts. They will often unload their stress onto these special people, without fear of getting hurt by them. When it comes to strangers though, ESTPs are much less vulnerable and often prefer to show their stronger side.

ISFPs are often seen as quiet and independent people, who keep to themselves most of the time. When the ISFP finds people they care for, they are often very open with those people. They are not afraid of showing their vulnerabilities, especially with people they care for. ISFPs feel more at ease being open and honest, and dislike feeling like they are hiding things from others. They prefer to be themselves, no matter what that means to others. ISFPs are not afraid of being vulnerable, and are often comfortable expressing their emotions to others.

ESFPs often wear their hearts on their sleeves, without even meaning to. They are naturally open individuals, and rarely guard themselves from others. ESFPs actually have a harder time keeping quiet, as this might feel unnatural to them. They are open and outgoing people, who love sharing themselves with others. ESFPs enjoy connecting with people and are often comfortable expressing their deepest thoughts and feelings with others. They may regret their vulnerability afterwards, but this does not stop the ESFP from being themselves in the future.