Do You Have the Desire to Build an Empire, Based on Your Personality Type 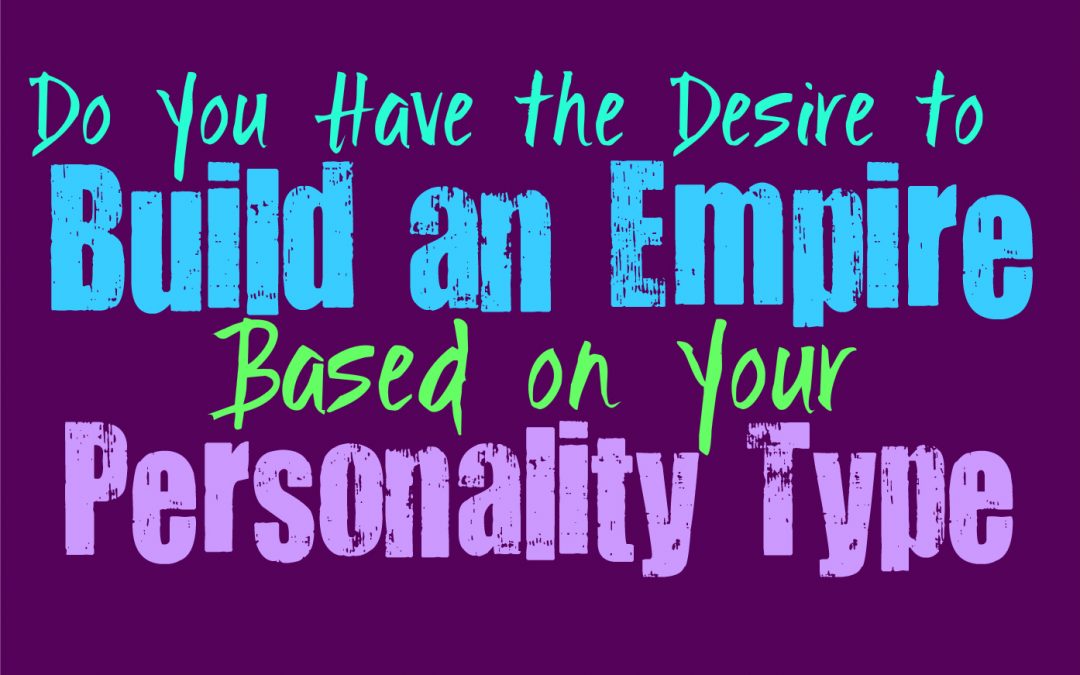 Do You Have the Desire to Build an Empire, Based on Your Personality Type

Some people truly want to build an empire, something they can be sincerely proud of. Whether this is building a business or just carving out a strong standing in their community, these people strive to have something that is their own and no one else can take this from them. Here is how driven you are to build an empire, based on your personality type.

INFJs can become both drawn to the feeling of building an empire, and at the same time completely repulsed by the ego involved in it. Some INFJs find themselves a bit more intrigued by the feeling of accomplishing something impressive and substantial, and so they might truly want to build some sort of empire. While they might not want to create something simply for the goal of being accomplished, the INFJ often wants to create something that makes a difference in some ways. Other times the INFJ might find themselves disinterested in the feeling of having to build something all about themselves.

ENFJs might be interested in building an empire, especially for the sake of providing something valuable for their loved ones. They want to do something truly impressive with their lives, and are constantly pushing themselves to be better. ENFJs do want to become something that they can feel truly proud of, and will work hard to create an empire for themselves and their loved ones. ENFJs are often drawn to building some sort of business, or something creative that they can really turn into something valuable.

INFPs don’t often find themselves interested in building some sort of empire, they simply want to do something of value. They believe in going after their dreams and often have truly passionate goals in their minds. While INFPs do want to make a difference and might have a desire to fulfill some greater purpose, that doesn’t mean they care much about building some sort of empire. For the INFP it isn’t about ego or making something that is just their own, it is more about expressing themselves and uncovering their passions.

ENFPs are creative and passionate people, who simply want to make something they can be proud of. They might be intrigued by the thought of building an empire based around the things they are passionate about the most. ENFPs want to be someone their loved ones are proud of, and enjoy being able to have some sort of bragging rights in some ways. ENFPs want to be able to express themselves and do something that feels truly valuable in some way.

INTJs definitely are driven by a desire to build some kind of empire, or something that really makes an impact on the world. They want to make their mark in some way and build something they can truly be proud of. INTJs main goal is information and uncovering something truly great, and so building empire definitely is of interest to them. For the INTJ it is about being able to really accomplish their goals and work towards being someone others can come to for information and truth.

ENTJs are absolutely driven by their desire to build an empire, as they strive to really create something of value. They want to carve out a place in the world that is their own, and strive to make something of true value. ENTJs work hard to be efficient and to accomplish their rather lofty goals in life. They do believe in striving for something great, and want to build an empire they can be proud of. For the ENTJ it is about making a difference and being someone that is known for something of value.

INTPs can bounce back and forth between a desire to build an empire, and a desire to be the invisible creator of things. They are passionate and creative people, who are extremely curious about the world around them. INTPs might be more driven by their desire to discover something new, and to uncover information that others are blind to. They don’t like just accepting things as they are, and often find themselves considering many different possibilities.

ENTPs might be intrigued by the thought of building some sort of empire, but they can become a bit distracted and quickly drawn to something else. ENTPs have so many ideas and desires, but have a hard time really sticking to one thing sometimes. They are curious about the world around them and really want to be able to experience everything without missing out. ENTPs want to create something and might be motivated by this in some ways.

ISTJs do want to build some sort of empire, even if it is a somewhat small and simple one. They do want to create something they can be proud of and work to carve out their place in the world. ISTJs want to bring value to the world around them, and be someone that is considered driven and accomplished in their community. They often strive to build an empire for the sake of their loved ones and themselves, so that they can really provide for them.

ESTJs are definitely driven by their desire to build an empire and set down their own territory. ESTJs believe in creating something of value and something truly substantial. They believe in providing for their loved ones and want to do whatever they can to build a lifestyle they can be proud of. For the ESTJ creating something impressive that they can call their own, is certainly a goal they strive and work hard for in their lives.

ISFJs aren’t really drawn towards a desire to build some sort of empire, instead they just want to build a happy life for their loved ones. They care about the people around them and are often mainly focused on their family. For the ISFJ having people around them who love and care for them, is one of the most rewarding things they can acquire. They aren’t often interested in building some sort of empire, for them this can feel like more of an egotistical goal.

ESFJs are often mainly drawn towards providing for their loved ones and want to really build a lifestyle they can be comfortable in. ESFJs are so focused on caring for others that sometimes they can forgo their own goals in life. Deep down some ESFJs might actually be intrigued by the thought of building some sort of empire and carving out a piece of the world they can be proud of, but they don’t always unearth this part of themselves.

ISTPs aren’t often interested in creating some sort of empire, and are much more interested in things that won’t tie them down. They are curious people who enjoy being able to explore new things and different options in life. For the ISTP it is important to really keep their options open, and feel free to follow whatever exciting new things might come their way. Being stuck in building some sort of empire might feel a bit draining and even boring for them.

ESTPs might have a desire to create something impressive in which they can be proud of. While the ESTP is often interested in the idea of building some sort of an empire, they can become a bit distracted and lose sight of where they are heading sometimes. They can be so focused on living in the moment and seeking out excitement, that sometimes the ESTP can make a mess of their accomplishments and need to start over.

ISFPs don’t often find themselves wanting to build an empire, instead they want to focus on more personal endeavors. ISFPs follow their hearts and will go by whatever feels right in the moment. This leads them down rather unique paths sometimes, but rarely does this cause them to feel a strong desire towards creating some sort of empire. For the ISFP it is more about being able to create something that is expressive and shows who they are.

ESFPs aren’t often interested in creating some sort of empire, instead they just want to live life on their own terms. They enjoy being able to experience new things and don’t want to feel tied down to something. For the ESFP life isn’t about having to build an empire, it is about soaking up the world around them and connecting with the people they love. They care about doing things that their loved ones can be proud of, but this doesn’t require building some sort of empire.