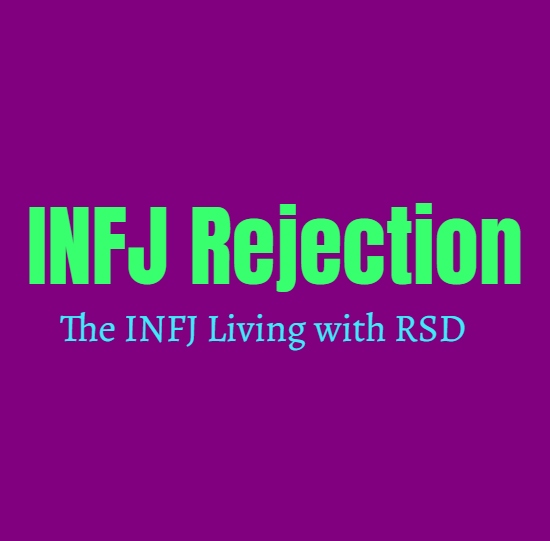 INFJs can certainly be sensitive to rejection and criticism, since they put a lot of pressure on themselves to be perfect. For the INFJ any kind of rejection can be difficult to process, which is why they often have different ways of attempting to avoid this. In some cases this can cause the INFJ to avoid taking risks, in other instances they simply strive to be perfect so that they experience less criticism. They can have a hard time processing rejection from people they care about, especially when they truly value someone’s opinion. When it comes to the INFJ with RSD this can become exacerbated, as they often already struggle when it comes to rejection.

INFJs can struggle with rejection in their lives, since they don’t like feeling as if they have failed someone. They go above and beyond in order to make others happy and put a lot of pressure on themselves to do so. This can make it difficult for INFJs to process feelings of rejection, especially with people they care deeply for. They do whatever they can to make their loved ones happy, and can certainly be perfectionists when it comes to this. Because of this they struggle to deal with criticism most of the time, and might find themselves wanting to avoid it. They might find themselves striving to constantly be perfect and please those around them so that they don’t receive this type of criticism. When the INFJ does feel rejected they can blame themselves, taking it as if they have somehow failed or let someone down. It can be hard for them to process these feelings, even a healthy INFJ can struggle with it at times. They want to be perfect for their loved ones and take things really hard from the people closest to them. It becomes hard for the INFJ to really accept mistakes they have made, not wanting anyone to reject or criticize their imperfections.

RSD is something that people with ADHD or ADD can suffer with, and can be a rather debilitating thing to deal with. For these people it becomes beyond painful when they experience a sense of rejection, and causes them to continuously obsess over it. They can perceive a rejection which hasn’t really occurred, feeling as if someone has slighted them when it was not their intentions at all. They can feel like they have been criticised by people they love rather easily, and this is really too much for them to handle in those moments. It is something which comes on in random situations, which makes it hard to really seek out ways of moving forward or avoiding these situations. For the INFJ this can be even more challenging, since they are so sensitive to what those around them think and feel. They can sense when something is off in their environment, and might find themselves feeling overwhelmed by this. They might take it upon themselves to try and improve things, or they can become reclusive because of it.

Some INFJs with RSD find themselves trying to avoid being around people or situations where they can experience rejection. Instead of moving past it they might feel like they need to stop trying altogether when it comes to pleasing others. In some cases the INFJ does the opposite of this and becomes a people pleaser. They strive to find any way of avoiding making any mistakes so that they don’t feel the sting of rejection. They might put on an image, one which avoids allowing people to see their flaws or who they are. Having RSD can really amplify those insecurities and makes it extremely painful each time the INFJ feels rejected or pushed aside by someone they love or care for. It is certainly harder when it comes from a person they are close to, rather than just a stranger.

For the INFJ who struggles with rejection, the biggest thing is learning to accept themselves first. They need to take time to process their own needs and figure out what boundaries are important to them. Not having firm enough boundaries is often where this begins for the INFJ, since they strive to make everyone around them happy. Constantly wanting to help everyone can make it really difficult when the INFJ feels rejected or criticised. Since they invest time in others rather than themselves, they often feel unappreciated for all that they do.