How Do You Feel About Fanservice, Based on Your Personality Type 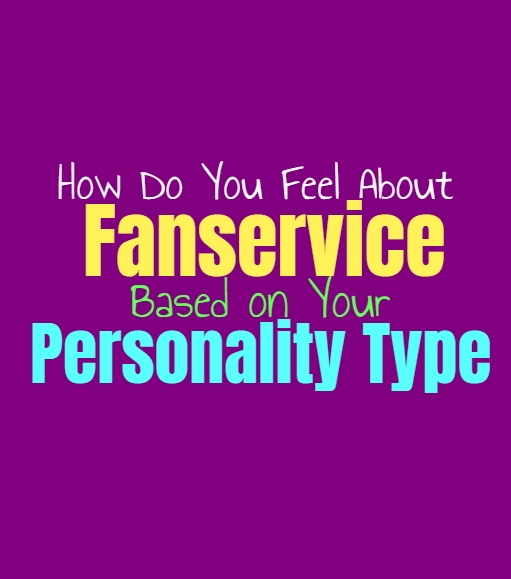 How Do You Feel About Fanservice, Based on Your Personality Type

For some people the idea of fanservice is a bit irritating and really isn’t proper artistry. For others fanservice is an exciting chance to cater to fans and make them happy with what you are providing. Everyone has their own personal take on fanservice and whether it is a good thing. Here is how you feel about fanservice, based on your personality type.

INFJs can become a bit annoyed with too much fanservice and might see it as gimmicky. They prefer when things are done sincerely and not simply to make fans happy. While there are some situations where they do believe it is important for artists and creators to pay attention to their fans, they want them to remain true to their work. For the INFJ breaking convention and following what is right, is often something to be inspired by more than just doing what is expected or will make the fans excited.

ENFJs do believe that some fanservice is important, especially when it comes to fans who have been supportive and loyal. They are naturally people-pleasers and so to them it is important to consider what fans want and what would make them happy. They can become annoyed with those who do this to such an extent that is ruins the artistry and inspiration in something, but they believe in balancing these two things. While they care about the creators and artists being able to be sincere to themselves, they also feel like it is important to cater to the fans sometimes.

INFPs don’t usually appreciate fanservice because they would rather the creators be true to themselves. When it comes to simply playing to what the fans what, this can feel like they are being fake and just working towards popularity. INFPs don’t enjoy popularity contests, and can become truly frustrated when the fanservice detracts from the creativity and makes it something cheap. To the INFP this can cause them to lose interest and can even leave them feeling angry at the situation.

ENFPs do enjoy fanservice sometimes but they prefer there to be a balance. They feel like it is important for things to still have a unique sense of creativity and not only pander to the fans. But ENFPs do enjoy when there is enough fanservice for it to be pleasing to them and leave them still feeling satisfied with the outcome. ENFPs can become emotionally involved in certain shows, movies or books, and so when something goes too far out of what they expect or want they can become annoyed or even angry.

INTJs usually don’t care much for fanservice and can become annoyed just by the thought of it. They prefer when something is sincere and created based on what is right and good, not simply what the fans will want from them. For the INTJ it is important to remain true to the story or the art, instead of just pandering to what fans or the masses might want. They might respect someone doing the opposite of what the fans want more, as long as it is a different and smart approach.

ENTJs do enjoy sanservice to some extent, since they don’t enjoy when their favorite stories or form of art goes against what they feel connected to. When something intentionally breaks with convention or goes against what is expected, this can seem a bit fake to the ENTJ. They appreciate when the creators follow their own inspiration and goals, but they don’t like when they simply try to irritate their fanbase and combat their sense of loyalty.

INTPs don’t necessarily find themselves against the idea of fanservice, as long as it doesn’t take away from the work itself. If something caters so much to the fans that it becomes insincere and degrades the quality, then the INTP will find this foolish and pointless. They lose interest in things which seem hoaky and pandering, and would rather something which is real and creative. They are drawn to things which are more unique, and want to find things which excite them personally.

ENTPs don’t really care about the idea of fanservice, as long as it doesn’t take away from the creation. They want the art to remain true no matter what it is, and so if the fanservice makes it cheap they will become annoyed by this. ENTPs don’t mind a little fanservice though, especially if it is done for the loyal fans who want a little bit of something personal in the creation. ENTPs just don’t like things which are insincere and done simply to pander.

ISTJs do enjoy fanservice on occasion, since they don’t like when things are intentionally shocking or away from what is expected. ISTJs do prefer fanservice when it comes to certain things, and believe that it is important to remain loyal to the fans. As long as it doesn’t become cheesy or overdone then the ISTJ won’t become bothered by this. They do find themselves frustrated when the creators just strive to shock fans and do the opposite of what they want though.

ESTJs do sometimes prefer a bit of fanservice, since they become annoyed when things move away from what is expected. While they enjoy a bit of creativity they don’t like when this is done just to shock the audience. While they realize fanservice can become a bit cheesy, they prefer some sort of balance with it. ESTJs just want to be sure that the story does not break away from what is should be, or leave the fans feeling detached.

ISFJs do enjoy a bit of fanservice, especially when it comes to their favorite stories or art. For the ISFJ having the creators pander to their fans a bit, isn’t something they find insincere. They are naturally people-pleasers and so they understand wanting to make others happy and striving to find ways to connect with them better. For the ISFJ fanservice is something they can certainly understand and appreciate as long as it doesn’t go too far.

ESFJs really do enjoy a bit of fanservice from time to time, especially with their favorite things. They don’t like when the creators try to steer the story away from what people want just to be shocking or different. They prefer when things are true to the original story, and can feel a bit deceived and even angry when these things change and betray that story. ESFJs understand the need for fanservice sometimes, especially since they are naturally people-pleasers who enjoy making others happy.

ISTPs don’t mind a bit of fanservice but they can become annoyed when it goes too far. For them it all depends on whether or not they are excited about the story or the artwork. They don’t need things to always be edgy, but they also don’t need it to fit into their expectations. They do enjoy when things are a bit shocking because they get bored of everything following what is expected or planned.

ESTPs do like fanservice sometimes, especially when it plays into the things they want from the story or creation. ESTPs also enjoy when things are a bit shocking though, since they don’t like feeling bored with the same old thing. ESTPs often want a mix of fanservice and being able to go against what is expected and follow their own set of rules for what they are creating.

ISFPs do sometimes enjoy fanservice, especially when it comes to the things they are passionate about and want to see them follow a certain set of expectations. When they care about something and are inspired by it, they can become bothered if it doesn’t go the way they really want it to. ISFPs are creative people though, and so they want creators to feel free to follow what feels right for them.

ESFPs do enjoy fanservice especially with the things they are passionate about and don’t want to see those stories ruined. When they follow something they do believe that the fans should matter and that their sense of loyalty should be rewarded. ESFPs do care about artistic creativity though and are often creative people themselves. While ESFPs want artists to be free to be creative in their own ways, they can become upset if there isn’t at least some fanservice involved.