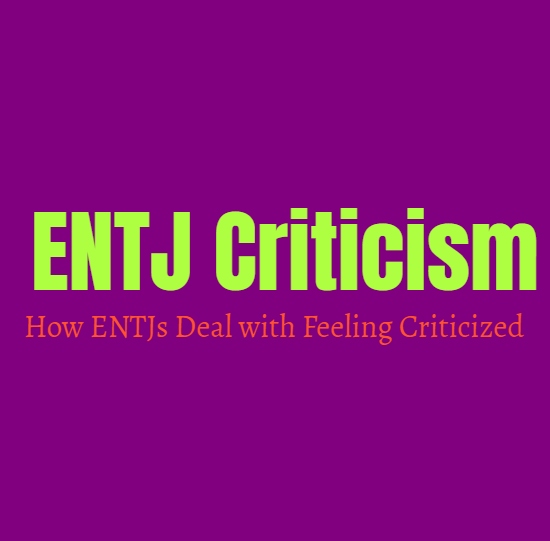 For ENTJs constructive criticism is often something they are equipped to handle, since they admire honesty. It entirely depends on the way this is being delivered though, as they prefer when people can be more concise and to the point. For the ENTJ dealing with people who allow emotions to get the better of them can be a real challenge. This is why their ability to handle the criticism often comes from how the other person delivers this, and if they are capable of being objective and not using too many feelings as a means of expressing their intentions and criticism. They try their best to approach life and their choices from a logical and practical point of view, as this is truly important to the ENTJ.

When it comes to criticism the ENTJ wants to be as objective as possible, as they truly value honesty among their companions. They don’t want people to hold back or pretend in hopes of avoiding hurting them. For the ENTJ it is a sign of respect when people take them seriously enough to share their criticism with them, as long as their intentions are good. They recognize when someone is simply trying to be clear and honest, and this is something which the ENTJ is going to value. It doesn’t mean they are going to always take this criticism as valuable, as this depends entirely on the information. They will likely attempt to analyze and consider the criticism, and see if it matches up with what they see as logical and true. ENTJs are not incapable of growth or change, instead they want to be able to improve and make themselves stronger and better. Sometimes this means being open to criticism and allowing people to express where they see some room for improvement. ENTJs definitely can have times when certain criticism really doesn’t hit them well, but it often depends on how the person expresses this. They need things to be more clear and also appreciate when the criticism comes with solutions and helpful advice.

For the ENTJ criticism is not acceptable when it comes from someone who is simply trying to attack or hurt them. In this case it is going to leave them feeling frustrated and likely want to push that person away entirely. If a person just wants to attempt to tear them down, then the ENTJ really has very little time for this type of behavior. They don’t want to waste their energy on someone who is only trying to bring them down, rather than be helpful or useful. This type of criticism can cause the ENTJ to lash out, or simply shut this person down and try to avoid them. They are not afraid of cutting people from their lives when they recognize that this person does not have their best intentions at heart. They value people who are honest, but also value people who are supportive and loyal.

ENTJs also dislike when someone is trying to deliver criticism in an emotional way. They need people to be concise and to the point when they are trying to give the ENTJ constructive criticism. They are not strongly connected to understanding emotions, and so when things come out overly emotional it can be challenging and overwhelming for them. If a person comes at them with emotions trying to criticize, even if the intentions are ultimately good, the ENTJ will not appreciate or be receptive to this. They need people who can remain calm and try and express things as clearly and accurately as possible. The emotions make it hard for the ENTJ to be objective to this criticism, which is why it is best for people to take a step back before trying to communicate these things to them. They favor efficiency and want to be able to improve for their loved ones, but ENTJs need someone who is willing to compromise as well.

For the ENTJ the hardest thing is dealing with emotional based criticism, especially if they don’t see clear solutions. They can improve this situation by trying to communicate this sensitively to those they love and care for. Just letting the people around them know that they need them to try and deliver criticism with a more direct expression, can be helpful and open up the discussion to better understanding one another. ENTJs really value honesty and they do want their loved ones to be upfront when they have things they need to discuss, which is why they try their best to be open to criticism and adjustments. It can sometimes require the ENTJ to take a step back and think things through, trying to assess the information from a logical and more open standpoint. They can certainly be more sensitive to the emotions of others over time, since they value the people in their lives very much. For the ENTJ the best thing is to have people who understand their needs as well, and can work on trying to give them criticism in a more helpful manner.