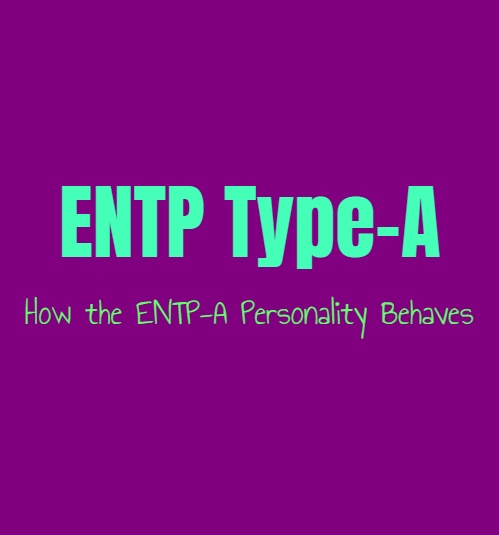 ENTPs do often test as the type A personality, since they fit into many of their qualities and traits. ENTPs are more laid back people, who enjoy taking things in stride. They don’t obsess over the smaller details and are often more confident in their own life choices. These are some of the natural ENTPs traits which make them more inclined to test as the type A or assertive personality. Here are some of the ways the ENTP type A personality will behave which sets them apart from the more turbulent ENTPs.

They Aren’t Prone to Worrying

The ENTP type A personality is not prone to worrying, and prefers to be more laid back about things. They don’t believe in stressing over smaller details or things which just aren’t that important to them. ENTPs realize that they can’t control everything and so they don’t want to allow every detail to bother them. When they cannot change something they prefer to just focus on the things they can affect and change. They would rather enjoy themselves and actually seek out new experiences. For the ENTP who is laid back and enjoys experiencing things fully, worrying about minor details really isn’t beneficial to them.

This type of ENTP would rather dive into new things and take the risks that it might not work out perfectly. They aren’t perfectionists, instead they are people who enjoy soaking up the positive experiences around them and want to really be able to learn from them. They don’t need everything to go according to some plan, especially if they can gain something more valuable from things being a bit messier. The A type ENTP actually enjoys letting things get a bit messy, and would rather not obsess over perfecting things when they can experience them firsthand without constant and draining preparations.

They are spontaneous people who enjoy diving into new things without needing to really prepare for it beforehand. They are willing to take a few risks in life, and aren’t afraid of what this might mean. Part of this comes from their own personal confidence and their ability to trust in themselves. They are willing to jump into things in order to uncover the truth and really allow themselves to experience it freely. They are often comfortable with this because they have an inner confidence in their ability to adapt to the change which might occur.

This ENTP often enjoy taking risks and being spontaneous, rather than needing to prepare for everything which happens. They will step into these things without constantly second-guessing themselves or needing to analyze even the smallest of details. They are courageous in their choices, especially if they feel like they can gain something from it.This makes them much more willing to go after the things they want, even if others might have their doubts. They are prepared to fight for their goals and often have a more “go-getter” mentality about things. They are not afraid of diving in headfirst when they want something, and would much rather take the chance than hold themselves back. They are much less likely to doubt themselves when it comes to going after the things they want, and so they don’t become caught up in over analyzing to the point of being unable to move forward.

They Are Confident and Take Charge

The ENTP-A is much more confident in themselves and their abilities, and isn’t afraid of taking chances because of it. They know what they are capable of and are willing to dive into things. They are also confident when it comes to taking charge a situation and won’t sit around second guessing themselves. They know that they can take care of the situation and often solve the problem without much struggle. They use their minds and their intuition in order to ensure that they can get things done accordingly. They are willing to step in and take charge of the situation, diving into the conversation or into the debate without hesitation.

They are also much more social people, and enjoy being able to connect with others. ENTPs are natural debaters and so having this sense of self-confidence is often naturally tied into their personalities. This is a big reason why most ENTPs do tend to test as the type A personality, since they are confident in themselves and not afraid to be assertive. This is certainly the more confident and strong-willed ENTP which you see, not the ones who tend to avoid conflict or hide from situations. They don’t allow outside stressors to affect them as much, and prefer to remain more calm and collected. Even when things seem a bit overwhelming, they are not afraid of the stress overwhelming them instead they take it one step at a time.